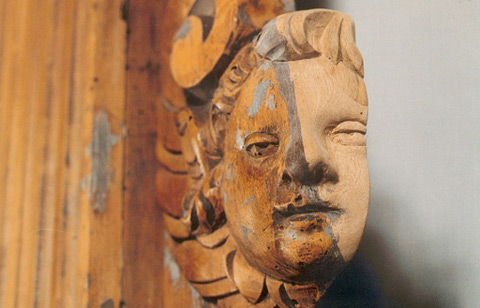 Some of the exhibition's highlights were: Madonna of the Rose Garden by Blaž Jurjev Trogiranin (around 1433) from the Trogir Church Art Collection; St. Francis of Assisi and St. Catherine of Siena by Matteo Ponzoni (around 1635) from Split Cathedral; the Romanesque crucifix from the Convent of St. Claire in Split; the polyptych from St. Cyprian Church in Vis (16th century) by Girolamo da Santa Croce; Sts. Cosmas and Damian by Giovanni Lanfranco (17th century) from the same name church in Lastovo; Madonna with Child and Saints by Giovanni Battista Pittoni (18th century) from St. Cyprian Church in Vis; a Roman floor mosaic from Gradina in Vis; Romanesque wall paintings from the Church of St. Michael in Ston; the stone relief depicting Christ from St. Spirit Church in Split; the wooden archbishop’s throne (17th century) from the Cathedral in Split.