A bronze statue of young athlete from ancient Greece, who scrapes a dust and oil layer off his body, was discovered by accident in 1996 on a sandy seabed off the Vele Orjule Island near Lošinj. It was covered in marine sediments and algae. 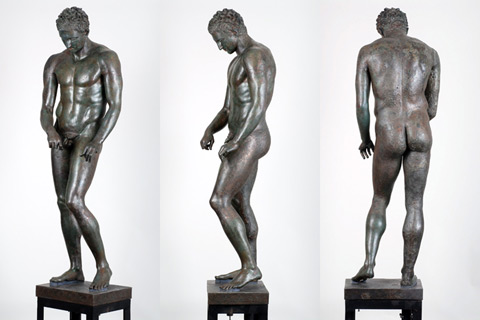 In 1999 the Ministry of Culture initiated an urgent action to retrieve this invaluable find dubbed the Croatian Apoxyomenos. It was entrusted to the Croatian Conservation Institute, where extensive research and conservation-restoration work was carried out in the 1999 – 2006 period.

As the conservation-restoration work progressed, it gradually revealed the artistic grace of the sculpture and the public's interest grew. In 2003, as part of the European Heritage Days, this exceptional monument of Croatian cultural heritage was exhibited for three days at the Home of Croatian Visual Artists, later to be returned to the Croatian Conservation Institute for further treatment.