After extensive conservation-restoration treatments and research, the painting of the great 16th century Venetian master Jacopo Tintoretto from the main altar of the Cathedral in Korčula was shown to the public, first in Dubrovnik and then in Korčula. 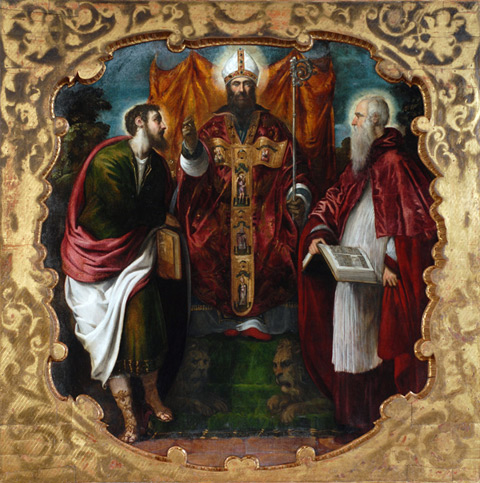 The exhibition presented a three-year-long effort to conserve-restore the painting, along with the research and archival discoveries which provided an irrefutable confirmation that the painting depicting St. Mark between St. Bartholomew and St. Jerome is indeed the work of Jacopo Tintoretto, and not just his workshop to which it had been previously attributed.

Archival records from 1550 pertaining to the circumstances of the Korčula commune’s order were discovered. The commune decided to look for an author for a new painting of the Cathedral’s main altar among renowned Venetian artists of the time. The name of the then young Jacopo Tintoretto was explicitly stated in the Town Council’s records, which also noted the dynamics of the making of the composition, further confirmed by conservation-restoration analyses. The under layers thus revealed numerous modifications by Tintoretto, who had made changes to his original ideas in an attempt to please the client. Separate phases of the master’s work were identified, beginning with the drawing of the composition, underpainting and later corrections.

The project of complete conservation-restoration of St. Mark between St. Bartholomew and St. Jerome was carried out by the Croatian Conservation Institute.