An exhibition was staged at the City Museum of Split to mark the completion of the second phase of conservation of the Peristyle, which took place in 2006 and 2007. Conservation-restoration work covered the southern part of the western colonnade with the Skočibučić-Lukaris Palace façade and was later extended to the ground floor of the Grisogono-Cipci Palace façade. 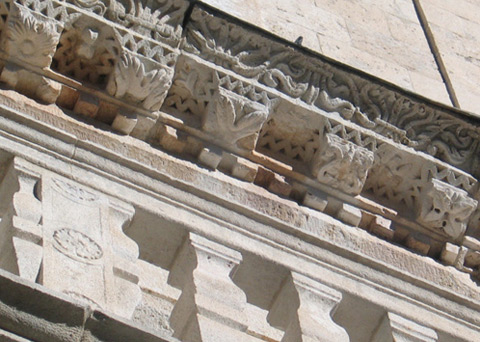 Obje palače, osim antičkih elemenata sadrže i romaničke, gotičke, renesansne i barokne slojeve. S obzirom na to da je prva faza radova na Alongside elements from the Roman period, both palaces have traces of Romanesque, Gothic, Renaissance and Baroque layers. The first phase of the Peristyle conservation focused on the northern part of the eastern colonnade. It continued on the opposite side, motivated by an intention to make the Skočibučić-Lukaris Palace house the future Museum of Sacral Art.

The integral rehabilitation and presentation of the Peristyle is one of the most important conservation-restoration projects in Croatia. It is carried out by experts from the Croatian Conservation Institute in cooperation with the City of Split Agency for the Historic Core, the Ministry of Culture and foreign partners: World Monuments Fund, Antiqua Foundation and American Express Foundation.