Christmas Greetings from the Conservators 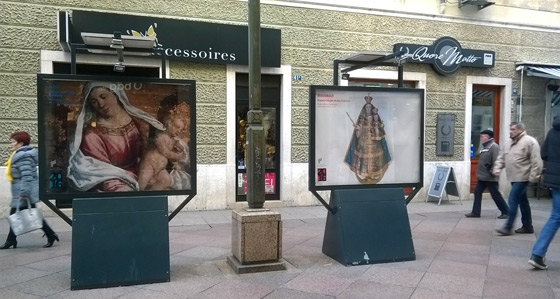 Croatian Conservation Institute offered greetings for the upcoming holidays to the citizens of Rijeka and their visitors by staging an exhibition at the Korzo. Also to mark the Open Door Days, the exhibition – a conservators’ Christmas greeting – at the Korzo in Rijeka will run from December 22nd, 2016 to January 12th, 2017. On view will be some twenty posters showing artworks that have been restored at the Rijeka Department of the Croatian Conservation Institute.

The Rijeka Department for Conservation has since it was founded in 2006 performed conservation on over a hundred artworks, a fraction of which are the pieces shown in the posters at the Korzo. Some of these include: the 1850 painting of The Immaculate Conception by Giovanni Simonetti from the Dominican Monastery in Rijeka, wall paintings by the workshop of master Vincent of Kastav (from the 1470s) in the parish church of S. George in Kastav, Sacra Conversazione (Bernardino Licini, 1531) from the church of St. Francis of Assisi in Krk, the main altar (18th c.) of the Holy Cross Church in Jurandvor , the 1650 painting of The Mystical Supper of the Holy Family from the Capuchin Monastery in Rijeka, 15th- and 16th-century icons from the Serbian Orthodox church of St. Nicholas in Rijeka, the painting of The Virgin and Child with Saints (Matej Pončun, 17th c.) from the Rab parish rectory, the polyptych of St. Bernard (Antonio and Bartolomeo Vivarini, 1458) from the church of St. Bernard in the monastery of St. Euphemia in Kampor on Rab Island and the painting depicting the Rest on the Flight into Egypt by an unknown 17th-century author from the Franciscan Monastery in Cres. The motifs were chosen to mark the season of Advent and Christmas, with farewell to the old one and greeting for a new year.