The several-year-long effort of the Croatian Conservation Institute’s experts to restore the Bronze Jacks from the Dubrovnik Clock Tower was presented to the Zagreb public in this exhibition. 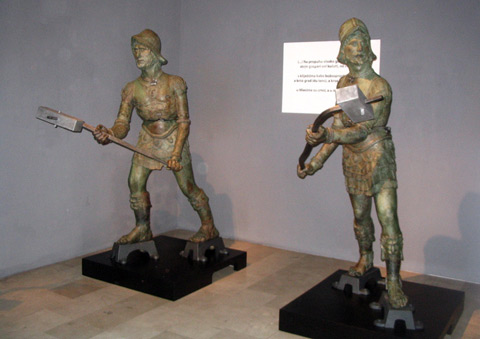 Mechanical figures in wood or metal - Jacquemarts - hammering the bell and striking the hours in an alternating manner, were a frequent feature of bell towers in late medieval and early modern times. When the municipal bell tower was renovated in the second half of the 15th century it was given a new town clock with two bronze statues to replace the old decrepit wooden ones. Townspeople refer to them as Maro and Baro, but due to the bronze patina they obtained with time they are widely known as “Greenies”. They are a first rate work of Renaissance sculpture and the sole example of bronze statue of that period in Croatia, as well as the southernmost example of Jacquemarts in Europe.

Conservation-restoration work was carried out by the Croatian Conservation Institute's Workshop for Metal. The complexity of the programme can be seen in the integral approach to the restoration of the bronze Renaissance pair. For centuries, the statues had been intensely used, exposed to the weather and sea air which is rich in chlorides. Conservation-restoration of the pair had to be coordinated in order for the final appearance of the statues to be harmonized. It was performed simultaneously on both statues to prevent the possible return of oxidation or some other chemical reaction which could endanger the pair.

More on the project of conservation of the Dubrovnik Bronze Jacks