In an effort to draw the publics’ attention to this valuable and unique archaeological find, prior to being permanently placed in its own museum and having already been shown in Zagreb, Osijek, Rijeka and Split, the ancient bronze statue of the Croatian Apoxyomenos was exhibited at the Museum of Antique Glass in Zadar. 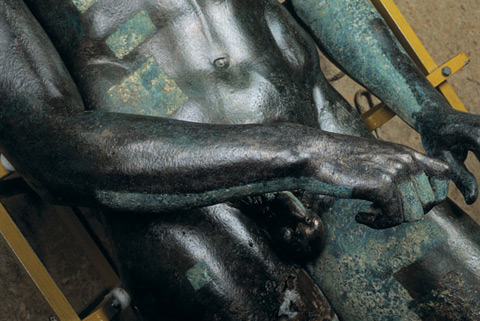 Aside from the Apoxyomenos statue, over the course of several months, the exhibition presented the botanical material from inside the statue and featured posters in Croatian and English. The posters traced the entire project, starting from how the statue was discovered and raised from the sea, archaeological research on the site, conservation-restoration and all accompanying research and documentation, the casting technique, the research of botanical material and dating. The posters also brought information on the meaning of the athlete statue in Greek art, similar statues and Mediterranean Sea routes in the Antiquity. A film produced by the Croatian Radiotelevision as part of its Croatian Cultural Heritage series was also being shown.

Croatian Conservation Institute carried out the project of comprehensive conservation-restoration of the Croatian Apoxyomenos with broad-branched cooperation and through the support of the Ministry of Culture of the Republic of Croatia. It was acknowledged as a significant contribution by a joint jury of the European Commission and Europa Nostra. Among 158 project applications from 32 countries, the Croatian Apoxyomenos project was awarded the European Union Prize for Cultural Heritage and Europa Nostra in the category “Conservation of Works of Art”. The Croatian award for special achievement in the field of cultural heritage protection – “Vicko Andrić” for 2006 was awarded to the project coordinator Miljenko Domijan, chief conservator of the Ministry of Culture, conservators-restorers Giuliano Tordi and Antonio Šerbetić and conservator art historian Iskra Karniš Vidovič.