The wooden chapel of St. Martin in Stari Brod

The wooden chapel of St. Martin in Stari Brod is a rare example of a traditional folk Baroque architecture with a completely preserved painted interior. Throughout the centuries, it had an important role in the everyday life of local villagers, not only as a gathering place for celebrating Mass, but also as an important symbol of centuries of survival despite wars and floods. In spite of the extremely dilapidated and ruinous state and the evacuation of its inventory, it remained opened until 2007, when construction started. The chapel was reopened and re-consecrated in 2015, after conservation and restoration was finished and all its traditional and historic characteristics preserved. 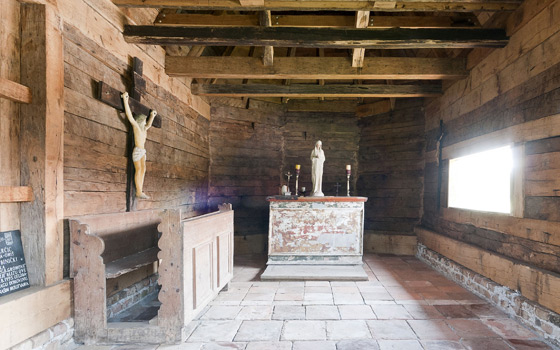 Wooden churches and chapels are the highest achievement of the traditional folk architecture in northern Croatia, especially in areas rich in pedunculated oak (Quercus robur), commonly found in lowland forests near the Sava, Drava, Danube and Kupa rivers and their tributaries. Once numerous, today, in the aforementioned area, only forty wooden churches, dating between the 17th and the 19th century, remain. The wooden chapel of St. Martin in Stari Brod, and the ones located in Buševac, Lijevi Štefanki, Stara Drenčina, Bok Palanječki, Draganićki Goljak and Velika Mlaka represent one of the rare examples of the traditional folk church architectural heritage from the 17th and 18th centuries in Pokuplje, Turopolje and Posavina in Croatia. It was created independent of all the tendencies of what were then the most outstanding works of architecture in Europe but, at the same time, its inventory and vividly painted walls and ceiling were completely incorporated in the Baroque style of the period.

In addition to being an important Croatian cultural monument, St. Martin’s Chapel in Stari Brod has a special meaning for the local community since it symbolizes centuries of survival for the village located next to the Kupa river that has survived constant floods through four centuries, and three wars in the 20th century alone. The chapel is located on a natural hill next to the river, and has served as a gathering place for villagers during floods since its construction. It is also important for celebrating St. Martin’s Day, the village patron saint, and it is a place for memorial services and funerals.

The chapel is mentioned in archival documents for the first time in 1699. It was constructed by using oak planks on brick foundation. In layout, it is a single-area building with a polygonal shrine and a small tower with a bell gable above the facade. In front of the entrance, there was a small porch that was removed in 1736, when a small vestibule was added, giving the chapel a rectangular shape. The floor of the chapel is made out of large bricks (the nave and the vestibule: 44x31x7 cm; sanctuary: 30x30x4.5 cm), and the year 1774 is carved into one brick.

A special feature of the chapel is in its interior design: all the walls, the nave and vestibule ceiling, as well as the shrine ceiling are covered with 88 shallow wooden panels of various dimensions that are framed by decorative laths. This resulted in a complete lining of the interior area of the building in vividly painted, wooden panels.

Ornaments on the panelling are not a part of the standard motifs used in folk art, but are probably work of a travelling artist. The template used was adapted to this building by using colours similar to the vibrancy of folk embroidery.

Preserved on the painted wooden panelling are motifs of intertwined symmetrical ribbons with leaves, large roses and tulips, carnations and peonies, heavy grapes with vine branches and acanthus leaves, naturalistically painted vivid green, blue, red, yellow, orange, light grey and brown colours. The motifs painted on the wooden panelling can be dated to the same time as the altar due to the similarity to its carved wooden details (acanthus leaves, carved ribbon, lattice details etc.).

The altar with the painting of St. Martin dates to 1743 when, due to a new retable, the sanctuary got a new barrel vault and the partition wall of the vestibule was removed. The altar stands on a wooden table, and consists of a low predella, surrounded by bases of columns in the central part supporting a discontinued crown above the middle part dominated by the altarpiece. The altar wings flank the columns, holding statues of St. Ambrose and St. Nicolas. In the upper part of the altar there is a wide attic surrounded by volutes, and in its centre, there is an image of the Eye of God with carved rays emanating from it.

Prior to the conservation-and restoration, the chapel was in disrepair, its roof was decrepit, with missing roof tiles in several places, which resulted in leakage to the chapel’s interior. This in turn resulted in the movement and deformation of architectural elements and the separation of planks of the painted panelling. Due to a long exposure to high humidity, the ceiling planks forming the painted panelling have partially rotted away, bent and cracked, and layers of dust mixed with excrement, hay and animal remains were deposited on their unprotected posterior side. There was also a reduction in cohesion between layers placed on the wooden support which resulted in their separation and sporadic shedding. This condition was a serious threat to the painted wooden panelling in the chapel’s interior.

The altar was removed from the chapel in April 1994 for the needs of the exhibition “Holy trail: Nine Hundred Years of Art in the Archdiocese of Zagreb, 1094-1994” (September 10th - December 31 1994, Mimara Museum in Zagreb). It had some damage to the polychrome and gilded layers, which were partially separated from the carrier and fell off. The wooden carrier had wormholes, and the joints of wooden elements were weakened and cracked because the organic glue gave way due to exposure to unsuitable microclimate conditions. The altar’s polychrome surface was covered in a dark varnish which had a thick layer of dust. Conservation-and restoration on the altar was conducted in 1994, and after the exhibition it was stored in the holdings of the Croatian Conservation Institute, where it remained until the work on the chapel was finished.

This project is an example of thinking about the monument as a whole, with all its values, and the cooperation between the Directorate for the Protection of Cultural Heritage of the Ministry of Culture and the Croatian Conservation Institute in the design, financing and execution of demanding conservation and restoration of selected cultural goods within the multi-annual programs, whose preservation is significant for the local community. The conservation and restoration project was financed by the Ministry of Culture of the Republic of Croatia and cost around 1,069,077 kunas (€140,670.00), and resulted in the preservation, conservation and presentation of all important traditional, historical and artistic features of this cultural good.