Altar of St. Aurelius from the Parish Church of St. George the Martyr in Brseč

The altar of St. Aurelius from Brseč is a compelling example of a high-quality Baroque 17th-century woodcarving in the region of Istria and Kvarner. The altar has been admired and studied by numerous experts for decades. The conservation and restoration work undertaken between 1990 and 2010 undoubtedly represents a significant contribution to determining its cultural, historical and artistic value.

The wooden altar of St. Aurelius is located in the southern chapel of the Parish Church of St. George the Martyr in Brseč. According to an inscription carved on the eastern wall of the chapel, above the entrance to the sacristy, the transfer of St. Aurelius’ relics can be dated to the year 1654 and linked to the activities of the Brseč parish priest Gregorij Mavrović. 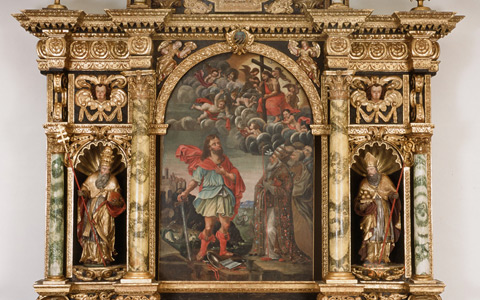 It is not possible to determine precisely when the altar was built. Canonical visitations of Alvise Marcello, the Bishop of Pula, from the 23rd of November 1658 recorded that the wooden chest used for keeping the body of St. Aurelius stood on the altar of Our Lady of Carmel, and that the new chapel in honour of St. Aurelius is yet to be built next to the sacristy. This leads to the conclusion that the altar could not have been erected before 1659, and that the time of its construction could be dated back to the end of 1650s or the beginning of the 1660s.

The sculpture of this altar is regarded in the context of Late Renaissance and Mannerist style. The voluminousness and pronounced plasticity of the sculpture point to the influences of Italian sculptural tradition, while the manner in which the surface of the drapery was rendered is suggestive of Central European sculpture. Due to the high quality of execution, the sculpture of the altar of St. Aurelius can be linked to a sculptural production of a more developed artistic centre.

Conservation works on the altar

The conservation and restoration of the altar of St. Aurelius from the Parish Church of St. George in Brseč began as early as 1990 with the dismantling of the altarpiece.

The altarpiece was covered in a thick layer of surface dirt and yellowed varnish, the paint layer had partially fallen off the background, and the flax canvas support had partly rotted due to its long-term exposure to high humidity. After the raised parts of the painting were underglued, the painting was taken off the stretcher frame, dust was cleaned off the back side, the painting was moistened and pressed to flatten the uneven areas and edges of the canvas, tiny holes in the canvas were patched up and the thick layer of yellowed protective coating was removed from the surface of the painting, after which it was determined that the entire painting had been overpainted in an uneven layer of tempera. Once the old protective coating was removed, the painting was lined on the heated suction table, onto a new canvas and using a wax mixture, which was followed by the removal of overpaint. Injuries to the paint layer were filled out with wax putty, the picture was stretched onto a new frame, and the injuries were retouched in oil paints.

The painting on the antependium was covered in a thick layer of surface dirt and yellowed varnish. The painting had detached from the background in several areas. The edges of the flax canvas support were thorn, because the painting had been attached to the antependium without a stretcher frame. After the detached layers were undergued, the yellowed varnish was removed from the face of the painting, and traces of lime paint were taken off the back side mechanically. Pieces of old flax canvas were inserted into the injuries that were caused by nails, after which the painting was lined onto a new canvas, using a heated suction table. Missing portions of the painting were filled with putty and toned with pigment, and after underpainting with gouache, they were retouched with oil paints.

During an earlier restoration treatment, the entire altar had been overpainted in a thick layer of white oil paint, on top of which a layer of shiny oil coating was applied, which turned yellow and darkened with time. Stratigraphic probes revealed that underneath the thick layer of white oil overpaint, there still exists the original layer of polychromy and gilt. Despite being damaged, the layer was largely preserved, so it was decided that the conservation treatment should focus on its presentation.

Conservation and restoration works on the sculptures and the altar architecture included desinsection, partial consolidation of the support and woodwork consolidation, undergluing of the raised layers of chalk-glue base together with the polychromy and gilding, the removal of overpaints, reconstructions the lost parts of the carving to match the preserved originals, the filling of the injuries to the layer of original gilding and polychromy with chalk-glue mixture and the retouch to make them fit into the ensemble. The incarnate of the statues was coated in matte varnish based on synthetic resin and turpentine oil, and the gilding was protected with a shiny varnish based on damar and turpentine oil.

A particular problem during the restoration was owed to the fact that the attributes of saints had been lost, making it impossible to exactly determine their original appearance, or even their identity, due to the lack of attributes, as exemplified by an unknown female saint from the right niche of the predella. Having taken these facts into consideration, it was decided to abandon the idea of reconstructing the attributes and present this segment in its pre-existing condition. Exceptions were made in the case of the triple cross on the crosier of St. Gregory in the left niche of the central part of the altar, and also to the lance of St. George in the attic, as these were elements whose absence would significantly influence the aesthetic impression of the whole, while it was possible to reconstruct them using comparative analogies.

Conservation works on the reliquary

Conservation and restoration works on the reliquary began by separating the relics and the inner padding from the chest. An analysis of the relic’s bones revealed that prior to being placed in the reliquary, they had been buried in the ground and exposed to long-term humidity, which caused them to become porous and brittle. After removing the surface dirt, the bones were consolidated by being soaked in polyvinyl acetate resin dissolved in acetone.

A unique problem was how to present the skull, since it was fractured and preserved only in fragments, while at the same time it is the main part of the skeleton, exposed directly to view. After consultations on the possibilities of its presentation, it was decided to undertake a minimal intervention into the existing content of the skull bones and, after consolidation, determine the original position of all the bones. The first to be assembled were those whose joints were found to be mutually fitting, and the remaining bones were subsequently arranged based on analogies. In order for the skull to be put together and presented, a base was made out of inert material onto which the bones were laid.

After analyzing the condition and characteristics of the textile paddings of the reliquary, a mechanical cleaning was taken up to remove surface impurities from the bone paddings, followed by dry and wet cleaning of textile parts and the sealing the injuries with textile patches.

At the Workshop for Paper and Leather, dry and wet cleaning was performed on the leather gloves and slippers of the body imitation. This included the painted leather wallpaper and the leather medallion. After the wallpaper was cleaned, it was flattened in the wet chamber, the lost parts were replaced with leather patches and it was retouched to fit into the whole.

Conservation research of the chest revealed that on top of the original layer of polychromy and gilding two overpaints had been coated. The top coat absolutely matched the latest layer of oil overpaint that had been applied over the entire altar, while the bottom coat was based on a bounder of organic origin. In as much as the probing of the chest indicated a high level of preservation of the original layer, and microsections confirmed the possibility of its clear layering, it was decided to remove all overpaints from the chest, that being in tune with the previously decided concept on how to present the altar.

In the course of conservation and restoration works it was determined that all the gilding of the chest was made on black polyment that was not found on any other part of the altar. This pointed to the conclusion that the reliquary had been made separately from the altar. Unlike the gilding on the chest, the gilding on its base was made on red polyment identical to that on the rest of the altar. This lead to the conclusion that the base had been constructed at the same time as the altar, and just for the reliquary.

In mid-September 2009, after balancing the retouches of all the parts, the restored altar of St. Aurelius was returned to the Parish Church of St. George in Brseč and reassembled in its original position.

Anđelko Pedišić, Conservation-Restoration Work on the Altar of St. Aurelius in the Parish Church of St. George the Martyr in Brseč, in: Portal, Journal of the Croatian Conservation Institute, Zagreb, 2011, 129–142.