Tabernacle from Our Lady of the Annunciation Church in Hvar

The Church of Our Lady of the Annunciation is home to a rare example of Rococo woodwork in Dalmatia. A tabernacle in which the host is kept, decorated with sculptural details and coated in a layer of water gilt, is a work of an unknown 18th-century master. Inappropriate keeping conditions in a hidden niche of the Hvar church have left their mark on the artwork. An overall conservation and restoration treatment was therefore performed at an Institute’s workshop, aimed at removing the cause of deterioration, consolidating structural elements and restoring the original appearance to the damaged piece of art. 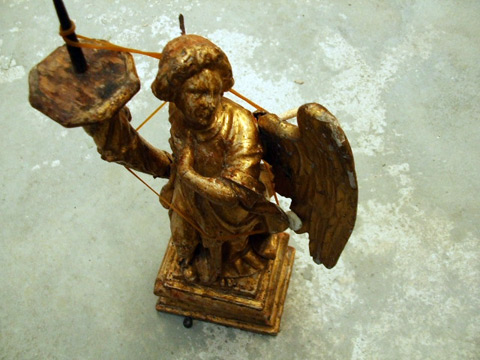 The gilded tabernacle from the Church of Our Lady of the Annunciation in Hvar is a rare example of 18th-century Rococo woodwork in this region. A work of an unknown author, the tabernacle measures 157×83×37 cm and is entirely coated in water gilt. The elaborate form of the tabernacle is surmounted by an aedicule, used as a throne for displaying a monstrance with the Holy Sacrament. It stands on a wide profiled base, with surfaces decorated in low relief of tendrils and flowers. Consoles decorated with leaves and volutes protrude laterally from the body the tabernacle, accentuated by figures of standing candle-carrying angels.

The aedicule which stands on top of the tabernacle is surrounded by carved tendrils with entwined flowers, fruits and angels’ heads. The top of the aedicule is shaped as a tripartite round crown and adorned with vegetable relief decorations. A motif of grapes stands out, characterized by pronounced plasticity. The inside of the aedicule is upholstered with smooth red, cut velvet. The piece is characterized by the high-quality of woodwork and gilding with features of Rococo style, and could probably be attributed to a Venetian workshop.

This valuable piece of art had long been forgotten and discarded to a hidden niche of the Hvar church. Inappropriate conditions in which it was kept had left their mark on its condition. Aside from the hardened surface dirt, many parts of the fine carving broke off. Nonetheless, most of those parts have survived and were brought to the Croatian Conservation Institute workshop together with the aedicule. No traces of previous interventions were visible on the artwork. Overall, the wood was stable, only locally could there be seen traces of harmful woodworm activity.

The conservation treatment began by making photographic documentation and recording the pre-existing condition of the artwork. Unstable zones of the gilding and the preparation were underglued with a solution of rabbit-skin glue. Water in the solution softened the preparation, thus making it possible for the risen parts to settle and be glued to the wooden support. Surface dirt was removed using a vacuum cleaner and a brush.

Once all the surfaces of the aedicule were cleaned, reconstructive works to put together detached parts could commence. The preserved fragments of fine carvings that had broken off were glued back to their original spots, and the missing parts of the carvings were reconstructed.

A new glue-chalk preparation was applied to all surfaces where injuries occurred. After applying the bole, all injuries of the gilt were retouched with real gold and toned to match the tone of the surrounding original gold.

After the conservation treatment was over, the aedicule was returned to the Church of Our Lady of the Annunciation in Hvar.