Baroque Tabernacle from the Church of St. Spirit in Split

The luxuriously adorned and gilded tabernacle from the Church of St. Spirit in Split was subjected to conservation and restoration treatments, due to its poor state, caused by wood degradation and instability of the structural elements and the gilt layer. Works comprised the removal of hardened dirt and subsequently applied overpaints, a consolidation of the loosened and a replacement of the missing parts and the gilding. 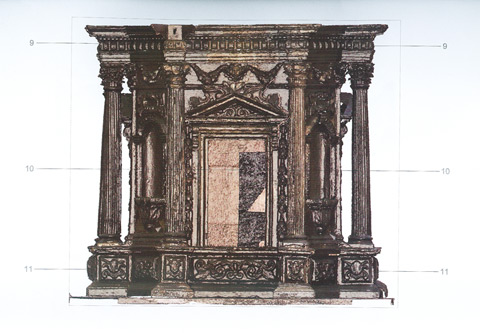 The wooden gilded tabernacle kept in the Church of St. Spirit in Split is a work of an unknown Baroque artist. The monumental tabernacle stands 137 cm in height and was originally coated in water gilt. It has a form of an Ancient temple with a dome. The lower, hexagonal portion with semi-circular niches is framed by a porch of fluted Corinthian columns standing on profiled bases. The surfaces are adorned with tendrils and additionally embossed. The basic structure was executed in soft wood with applied mouldings and reliefs. The surfaces are richly adorned with tendrils, vegetable, anthropomorphic and geometric motifs. Doorframes are missing from the front side; like the lateral sides, they were probably painted. The inner niche, the teca of the tabernacle, is padded with multi-coloured damask fabric, typical of the 17th century, which was firmly glued to the wood and could not be taken off without causing damage. A hexagonal drum, decorated with cartouches and lateral tendrils, is placed on top of the body of the tabernacle, superimposed by a shallow dome adorned with ribbon-like relief decorations.

In the times of Archbishop Urban Krizomali, in the second half of the 20th century, the tabernacle was brought to the Church of St. Spirit, designated as an exhibit for the future museum of sacral art of the Split Archbishopric. But as the museum was never founded, the tabernacle whose origin is unknown, remained stored for years in the church choir-gallery. Old visitations from Split do, however, mention a luxurious tabernacle in the old Church of St. Claire in the town centre, which the Poor Clares had abandoned in the 19th century.

The wood of the tabernacle was locally damaged by woodworm activity, mostly on its rear side. Degradation of the wood was visible around the nails, which were subsequently used to fixate the unstable elements of the structure. The corrosion of iron nails toned the surrounding wood and accelerated decomposition of its cellulose component.

Some elements of the tabernacle were unstable, others were missing. A reddish-brown bole was applied over the base of white glue-chalk preparation and gold leafs were laid on top. In some areas, the gilt detached from the wood together with the preparation, so it was necessary to underglue it. The surface of the tabernacle was covered in overpaint, consisting of two layers. The first, white-colour layer was thickly applied directly over the gilt, and it had a double function. Used as putty, it filled out the uneven surface, while at the same time creating a base for overpainting with technical gilt, the so-called purpurine. The entire surface of the tabernacle was covered in hardened surface dirt.

Stratigraphic analysis of the paint layer samples and the probing revealed that the original gilding has been largely preserved. These findings were confirmed once the overpaint was removed, using a combination of chemical and mechanical methods of cleaning.

All unstable parts of the structure were fixated once more. A large number of the original mouldings were lost, especially from the bottom zone of the tabernacle base. New mouldings were made by combining machine and manual methods. This was done in larch wood, the same material used for the entire original tabernacle. Lost parts of the ornament were reconstructed with two-component epoxy putty.

The final phase of the treatment included a reconstruction of glue-chalk preparation, the application of bole and gilding. The gilding was reconstructed by combining gold leafs and gold powder. The newly-applied gilt was toned with pigments bound with damar varnish, which made it fit into the tone of the original, old gold. To achieve optimum saturation, glow and uniformity of the surface, the final varnishing was applied in several coats, of damar varnish and synthetic resin-based varnishes.