Romanesque Painted Crucifix from the Convent of St. Clare in Split

The long, complex conservation treatment of the Romanesque painted crucifix from the convent of St. Clare in Split revealed traces of a number of prior interventions, testifying to a continuous awareness of the value of this work of art and the centuries-long care over its preservation. On this occasion, most of the previous coats of overpaint have been removed, the damage to the wooden support has been repaired, and the crucifix has been treated with gamma irradiation to provide it with permanent protection from biological degradation.

The convent of the Sisters of St. Clare in Split was established in 1311 by the archbishop of Split, Peter IX (1279-1321). The convent was built thanks to the bequest of a rich citizen of Split, a certain Josip, and information on its consecration has been preserved in a document published by Daniele Farlati in his work Illyricum Sacrum. The archive of the archbishopric of Split contains no data on the furbishing of the convent and the church, and the archive of the Sisters of St. Clare was burnt during the outbreak of plague in 1784. For this reason, there are no archival data on the crucifix that is the subject matter of this text. 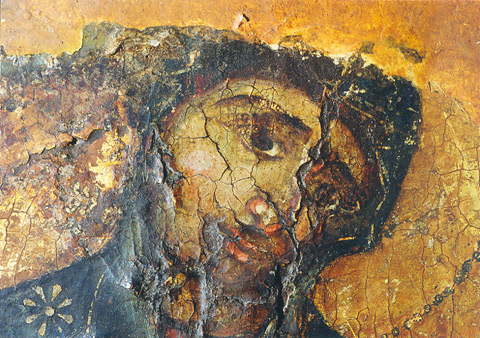 The size of the Romanesque painted crucifix is 261x191 cm. The crucified and tortured body of Christ is framed with medallions located at the ends of the arms of the cross. At the end of the left horizontal arm, there is a depiction of the Madonna, and opposite her of a young St. John. The medallion at the top of the vertical arm features St. Michael, holding a disc with a depiction of Golgotha in his hand. In the bottom medallion, there is a depiction of St. Francis.

The suffering Christ is portrayed with his head bowed towards his right shoulder and framed with a halo. On his hair, a crown of thorns is painted in red. The curly dark hair falls over both shoulders in two stripes of restless lines. Also restless and curly is his beard, divided in the middle. The shading on the hair and beard has been achieved with golden streaks. The eyes are closed, with large triangular lids. The body is twisted, and the arms are not portrayed as though carrying the weight of the body. The manner in which the bones and muscles are emphasized with dark lines, characteristic of this artist, can be observed all over Christ's body. The waist and hips are wrapped in dark drapery, roughly stylized with nodes and heavy stripes. In his portrayal of Christ's suffering, the artist has focused on details such as streams of blood flowing from the wounds on Christ's hands, feet and chest. The painter's skill is particularly visible in his drawing artistry, with which he has modelled and emphasized the physical pain of the thin, tormented body of Christ.

The overall style of this crucifix is rather stiff, with a marked graphic finish, but it is at the same time refined in the way in which details have been shaped, such as the skin, hair and beard. The details of the crucifix reveal a master faithful to the Adriatic-Byzantine style of painting, but at the same time open to western Romanesque influences. The artist's disposition comes across especially in small figures on the arms of the cross. They have been painted slightly more attentively, with fine lines of paint. The sorrowful Mary and St. John silently mourn over the half-dead and tormented body of Christ. The Madonna is wearing a dark blue dress and a maphorion, her arms stretched towards the figure of Christ. The typically Byzantine shading is rendered with golden lines. Of the four medallions, the best preserved is that representing St. John the Evangelist. He is wearing dark blue clothes and a red mantle, shaded with golden lines. St. Michael, depicted rather stiffly at the top of the crucifix, with attributes of the judge of human souls, had suffered extensive damage. The entire upper segment of the medallion was missing, and the face, prior to the treatment, was an old, poorly made attempt at reconstruction of the lost face. The figure at the bottom of the vertical arm of the cross was missing its entire lower half, but it was assumed to have depicted St. Francis. If this is indeed a painting of this saint, then this is his oldest representation preserved in Croatia.

Issue of attribution and dating

The crucifix was first published by Kruno Prijatelj in 1950, in Vjesnik za arheologiju i historiju dalmatinsku (Herald of the Archaeology and History of Dalmatia). In his text, he placed the crucifix within the circle of the Tuscan crucifixes of the Duecento. In it, he noticed a clear mark of the Pisa school, and he put it immediately with the works of Giunto Pisano and his workshop. Prijatelj observed the dominant Byzantine trait of the crucifix in "the general rendering of the figure, the types of Mary and John, the effect of the dark brown, olive and gloomy colours, in the concept and position of the figure, in the technique, the traitement of the shaded details with light green-yellow parallel stripes." The strong concept of pain is patent in all details of the figure of the crucified Christ. The characteristic marked elbow joint is visible in the long, rigid arms. In continuation, Prijatelj concluded: "The typical mannered Byzantism and the extraordinarily subtle, but still drastic, concept of pain, emphasized also by olive colours, are characteristic of the work of Giunto Pisano and his circle."

Prijatelj's comments were critically reviewed by Ljubo Karaman in 1954. He found stronger affinities between the crucifix and some of Cimabue's crucifixes found in Emilia, and he dated it to the early 14th century. In addition, he thought that, because of certain variants, specific features and retardations, the crucifix could have been painted in Dalmatia.

In response to Karaman's observations, in an article published in 1961, K. Prijatelj accepted a somewhat later dating of the crucifix than that he originally proposed, still putting it into the late 13th century or the very beginning of the 14th century. But he stood by his views of the obvious and dominant features of the late phase of Giunto's work. Prompted by Karaman's analysis, Prijatelj also questioned the possible place of origin of the crucifix, putting it in the context of other paintings of the Madonna that were discussed at the time: those in Our Lady of the Belfry, in the chapel on Sustipan in Split, and in cathedrals of Hvar and Zadar.  Prijatelj accepted that the Madonnas from Split were closely affiliated to the crucifix in the convent of the Sisters of St. Clare, and that they could have been made by the same workshop. In his view, it was more likely that the Split works had been imported from Tuscany or made by a Tuscan workshop in Split, than that they had been made by local masters.

When the elements that had been added subsequently were removed from the crucifix, its height was reduced from 355 cm to 253 cm. The surface of the painted layer was cleaned of coats of varnish and retouch. With the removal of the black overpaint, the surface of the crucifix became dark blue. A narrow gilded rim, ornamented with small rhombi, was discovered around the edges of the wood of the cross. A more recent inscription, “INRI” was removed from above Christ's head, and the Greek letters “IC * XP” were uncovered in the same spot, framed with an ornament of small golden rhombi. The cleaning has brought up all the refined details of the tormented figure of Christ.

The restoration revealed that the depiction of the Madonna was badly damaged and that her face was a collage of the preserved fragments of the original painting and of subsequent interventions. In place of the missing head of St. Michael, there was a 'glued' part of a Baroque head painted on canvas. When it was removed, another painted head was discovered, which was also the result of a subsequent intervention.

The treatment in the Croatian Conservation Institute in 2002

No substantial repairs were made to the crucifix for forty-three years after the intervention by Filip Dobrošević. The condition of the artefact prior to the treatment was rather poor, calling for thorough conservation work.

The wood that the crucifix was made of was rather unstable. The joints were loose, and the whole wooden mass was degraded, due to the damaging activity of woodworm. The bottom arm of the vertical beam had been shortened, resulting in the loss of the lower half of the medallion depicting St. Francis. The shape of the protrusions in places where the beams were joined had been transformed in one of the previous interventions from square to circular, probably because of the wood degradation caused by woodworm.

The rear side of the crucifix was covered with dark varnish and dirt. Its front and sides displayed a number of coats, testifying to the numerous repairs made to the crucifix through history. Traces left by such repairs spoke of continuous awareness of the value of this work of art and the centuries-long care over its preservation. Probing of the sides of the crucifix established that there were five coats of paint. A whole range of overpaints was present on the face of the crucifix. At various times, they had altered the appearance of individual segments of the crucifix. The original paintings of the faces of the Madonna and St. Michael had been lost completely, and the damage had been reconstructed back in the Baroque period with new overpaint, which in certain places overlapped with the original surface.

The painted layer was raised and unstable in a number of places. The most obvious among them were circular areas of lifted painted coat which were the result of the corrosion of nails originally used to link the planks of the cross. Given that the nails are located under the painted layer, their increased volume, caused by corrosion, resulted in circular sections of the painted layer on the face being 'punched out'.

In the Ruđer Bošković Institute in Zagreb, the crucifix was treated with gamma irradiation in order to stop all the woodworm activity. In the first phase of the treatment, the unstable sections of the painted layer were underglued with fish glue, and damaged and fragile parts of the wooden support were consolidated. Once the wood and the painted layer were stabilized, the crucifix was cleaned and the overpaint removed. Surface impurities were cleaned from all the surfaces of the crucifix. All previous coats of overpaint that covered the original were removed. Under the thick layer of dark varnish and dirt on the back of the frame, the original painted layer was discovered, consisting of brown-grey paint sprayed with ochre and white. Possibly, it was meant to imitate porphyry stone. The overpaint was also removed from the sides of the crucifix, all to the original coat of red paint. All the layers of overpaint were removed from the face of the crucifix, including a blue coat which covered the originally black background. The retouches and reconstructions made in 1959 were removed, too. The decision was made to keep the Baroque faces of the Madonna and St. Michael, since x-ray images had not revealed any originals beneath the painted layers. The reconstructions were removed only in sections which lay over the original.