The mediaeval noble castle of Sokolac was the most important centre of the powerful Croatian princes of Krk in the region of Lika. Beneath its strong walls, in turbulent times, the settlement of Brinje came into existence. Because of its representative architecture and visits of kings and other prominent personalities, it belongs among the historical monuments of Croatian cultural heritage.

The Castle Chapel of the Holy Trinity

The two-storey castle chapel of the Holy Trinity is the most important and best-preserved example of late-Gothic sacred architecture in inland Croatia. Its restoration began in the last third of the 20th century. The Croatian Conservation Institute engaged in years of extensive conservation work aimed at renovation and presentation of the chapel. Nowadays, the chapel features a permanent exhibition on Brinje and the princes of Krk. 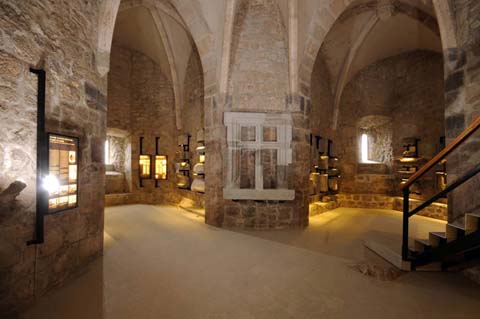 When travelling from central Croatia towards the Adriatic coast, soon after you leave the Mala Kapela Tunnel, in a picturesque valley cut in half by the motorway, you will see a settlement in the centre of which there is an elevation with a monumental old building rising above the surrounding ruins. This is Sokolac, noble castle of the formerly powerful Croatian princes of Krk, within which there is one of the most beautiful late-Gothic sacred edifices in Croatia. At the foot of its strong walls, which provided protection in turbulent times, the settlement of Brinje has developed.

Noble castles are one of the phenomena of the European Middle Ages, and their most recognizable symbol in the landscape. For centuries these localities, now reduced to ruins, were centres of the political, economic and cultural life of the country.

The Seat of the Princes of Krk

The appearance and development of noble castles in Croatia is linked to the most powerful noble families of the time. Brinje, mentioned for the first time in historical documents in 1343, was the most important centre of the princes of Krk in the region of Lika. In 1412, King Sigismund stayed in Brinje for a couple of days, and in 1424 the princes of Krk hosted the Danish King Erik VII there. In addition, the princes of Krk welcomed other prominent figures to Brinje – for example, in 1396, Enguerrand VII de Coucy on his way from France, via Senj, to Buda. The princes of Krk supported construction endeavours and the arts, and in 1430 the Pope confirmed that the princes of Krk originated from the old Roman family of Frangipani, thus granting them the right to a new family name and coat of arms.

The Frankopans used political decisions and ties of marriage to strengthen their economic power and extend their political influence and estates in the safer, northern regions of Croatia. With the fall of Bosnia in 1463, the Turks came very close to their old estates, after which, in 1469, King Matthias Corvinus took away from them Gacka and a part of the Hrvatsko Primorje region with the town of Senj, and there he set up the first organized border defence. After the death of Corvinus in 1490, the Frankopans restored their rule over their old estates. In the aftermath of the heavy defeat of the Croatian army by the Turks, in the battle of Krbavsko Polje in 1493, the years that followed were marked by utmost insecurity. After the even heavier defeat of the Hungarian army in the battle of Mohacs, the Frankopans rallied representatives of the Croatian nobility at the election convention in their noble castle of Cetina. There, on 1st January 1527, Ferdinand I Habsburg was elected King of Croatia. Aware that Brinje could not be protected from the superior Turkish force, after several years they ceded Brinje to the king, who used it as a permanent military garrison. Even though Brinje was threatened by the Turkish army on several occasions, it was never captured.

The structure of the castle of Sokolac

At the time of the princes of Krk, Sokolac was a very representative edifice, dominated by the strong vertical axes of the entrance tower and chapel of the Holy Trinity. The access to the burg led through a square, three-storey tower. Its façades were divided by pilaster-strips, linked with blind arches in the top section of the façade; this is often singled out as a unique example of this type of architecture in Central Europe. Opposite the tower, the eastern side of the rectangular courtyard was closed by the powerful volume of a two-storey chapel – the only one of its kind in Croatia. On the northern side there was the keep, whose main façade, opened with large 'Bohemian' windows, faced south, while on the southern side of the courtyard, there stood a farmhouse. 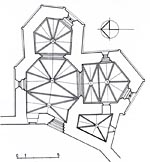 The representative castle chapel of the Holy Trinity leans against the defensive wall on the eastern side. Due to the steep slope on which it stands, the chapel rises above a substructure of the same ground plan and the same height, but its interior features numerous architectural details. The chapel is the central building, and the lengths of its two axes are equal to the height of the interior, but a distinct feel of Gothic verticalism has been achieved by the division of the space into three. On the opposite side of the gallery, on the eastern side of the nave, there is a sanctuary, completed polygonally, and on the southern side there is a space of the same size dedicated to Our Lady of Seven Sorrows. The interior of the chapel, with its complex ground plan and unusual height, is uniformly lit through high monophoras and biphoras. The sacristy, of small, trapezium-shaped ground plan, is wedged in between the side chapel and the defensive wall, and raised above the ground. All four interior spaces of the chapel are covered with ribbed groin vaults with keystones featuring coats of arms of the princes of Krk and the powerful Slavonian Gorjanski family, with which they were linked by marriage. The princes attended masses from the gallery, accessed via a wooden porch from the first floor of the keep. The soldiers and servants entered the nave of the chapel via separate stairs from the courtyard.

After the care of Sokolac was taken over by the permanent Krajina garrison, the former representative noble castle was turned into a counter-Turkish fortress, and military engineers modernized its defence system. In the location of the defensive building they constructed a low, semicircular battery tower, the courtyard was divided by a wall, and the entire site was protected with an outer defensive wall, reinforced with semicircular towers and the square entrance tower. All three original entrances to the chapel were walled in and turned into loop-holes, and new entrances were opened inside the newly erected wall. In 1653, new flooring was laid in the chapel, and the Gothic winged altars were replaced with new, tall, narrow Mannerist altars. Gothic statues of a Madonna and Child and a Pietà, probably taken from the old altars, were incorporated in the new ones (around 1430).

The history of the renovation

After a full three centuries, the army left Sokolac. The parish continued to look after the chapel, but the rest of the castle was left to disintegrate and fall into ruins. The first modern Croatian historian, Ivan Kukuljević Sakcinski, wrote the first account of the history of Sokolac in 1869. In the same year, the famous Zagreb photographer Ivan Standl shot the first photograph of Sokolac, and in 1884 Martin Pilar, who was studying in Vienna at the time, made the first architectural survey of the chapel and chose the project of the reconstruction of Sokolac for the topic of his bachelor's thesis. In 1901, the entire eastern façade of the entrance tower collapsed. In 1917, an earthquake caused extensive damage to the chapel, and the sacristy was destroyed in World War II. The structural repairs made after the earthquake were poor, and on top of that the property was badly maintained, resulting in a large section of the western façade collapsing in 1963. The then Zagreb Conservation Institute immediately set to renovating the chapel, and the first interventions were aimed at prevention: the altars were dismantled, the ceilings were propped up, the stone railing on the gallery was dismantled and the remaining section of the western façade was pulled down. Thereafter, the structure of the building was repaired, a new roof structure was built and covered with shingle, and a lightning-conductor was put in place. The work was suspended in 1972.

The suspension lasted until 1984, when the Restoration Institute of Croatia (nowadays the Croatian Conservation Institute) resumed the work. By the beginning of the Croatian war of Independence in 1991, the main façade and the western part of the roof structure with bell-gable had been reconstructed, the other façades had been restored, the vault ribs in the chapel substructure had been completed, the missing vault ribs for the chapel had been dressed and the chapel vaults had been dismantled.

After the Croatian war, the work was resumed in 1999. The decrepit roof, made of spruce shingle, was replaced with split larch shingle, and a new lightning-conductor was installed. The Frankopans' entrance tower was explored, and a preliminary design for its reconstruction was developed. In the chapel, all three ceilings and the gallery were gradually reconstructed. In parallel, the interventions in the chapel's substructure were completed, and a permanent exhibition on Brinje and the princes of Krk has been set in it. Eventually the sacristy has also been reconstructed, the inscription of the year 1653 conserved in the nave, and a wall painting in the sanctuary. After several years of their conservation, both Mannerist altars have been returned to their places, together with the above-mentioned Gothic sculptures from the legacy of the princes of Krk.

The chapel of the Holy Trinity is undoubtedly the very culmination of sacred architecture in the territory of inland Croatia. The articulation of its interior space, the extraordinary details and unique features – such as its two storeys, the only preserved stone gallery railing, the miraculous position of the sacristy and the two preserved Gothic sculptures in this small castle chapel, elevate it to the position of the most important and best-preserved example of late-Gothic sacred architecture in inland Croatia.