Conservation Research of the Administrative Building of the Rijeka Sugar Refinery

A team of experts from the Croatian Conservation Institute has carried out years of comprehensive conservation research of the Administrative Building of the former Sugar Refinery in Rijeka. The programme encompassed various activities, ranging from historical and archival research, through inspection of the physical condition and statics of the building, to conservation research of the architecture, stucco decoration, wall paintings, tile stoves, joinery and metalwork. The final conservation research study, completed in 2006, offers guidelines for the building's renovation and some new information about the purpose of this building as a notable residential and administrative palace.

The Rijeka Sugar Refinery was founded in 1750, pursuant to a decision by Maria Theresia, prompted by her intention to strengthen the economy of the Austrian coastal region. The administrative building was erected in 1752, as the central facility within a large complex owned by the Trieste-Rijeka Privileged Company. Following a fire in 1785, the building was renovated and richly adorned with stucco and wall paintings. The conservation research showed that the pre-existing ground plan was not modified to any significant extent, but a large intervention was made on the main staircase. 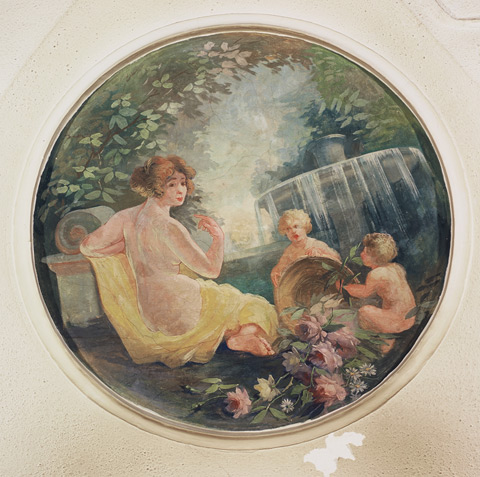 The extensive renovation campaign was, for the most part, completed in 1786, thanks to the efforts of the best-known Sugar Refinery director, the Dutchman Peter de Vierendeels. This is recorded on a plaque set in the stairway. For the time being, it has not been confirmed who built the sugar refinery, but archival data links its original construction to Francesco Saverio de Bonomo, an engineer of the Construction Administration of the Trieste Regency, while the name of the well-known Ljubljana architect Andrea Menini is mentioned in the context of the building renovation of 1785/86. Generally, master craftsmen and artisans, painters, stucco makers and other artists could well have come from the area of Friuli and Venice.

After the sugar refinery was closed in the first half of the 19th century, the facility was at first used as military barracks, and then it accommodated a tobacco factory, which stayed there until the end of World War II. The architectural characteristics of the building were generally degraded by these new uses, but some elements of interior decoration – for example, the hall on the first floor that was decorated by the painter and interior designer Giovanni Fumi – contributed to adding new values to an old edifice. In the period between World War II and the end of the 20th century, the building of the former sugar refinery was used by the Rikard Benčić Engine Factory. This name of the entire complex still prevails in popular culture.

The palace is a one-wing building with raised ground floor, mezzanine, and three upper floors. The distribution of the interior spaces is defined by two axes of symmetry. The transverse axis consists of a large staircase which goes up the entire height of the building and comes out with a projecting block on its northern facade. The same axis includes one large room on each floor by the southern facade. The longitudinal axis is determined on each of the floors by two very long lobbies, set symmetrically on either side of the central spatial core, with other rooms located around them.

The ground floor is characterized by large, vaulted spaces, intended for storage of the sugar refinery's products. The rooms in the low mezzanine had the same purpose, and they were linked only to the ground floor on the western and eastern sides. The large vaulted rooms on the southern side of the first floor, linked to one another with arches, were also used as storage spaces, while the rooms to the north were painted, and this is where clerical staff stayed and worked.

The second floor is the most notable floor of the building. The longitudinal axis includes high lobbies, extending three floors upwards. They are separated by arcades, and the light originally entered through a large skylight in the roof. On the third floor, the gallery arcades on the northern and southern sides were linked by balustraded bridges.

In the central zone of the second floor, there is a ceremonial hall, which encompasses the height of both the second and third floors. It appears that the hall was refurbished during the 1785/86 renovation campaign. The walls are shaped by the architecture of pilasters and niches in the stucco, and marbled. The oval stucco medallions in the ceiling contain reliefs depicting scenes from Roman military history; among them, there are emblems with motifs of ancient military equipment. Among the rooms on the second floor which used to be luxuriously furbished and painted, two symmetrically located salons by the southern facade should be pointed out. The Vista Salon in the western part is painted with Later Baroque vistas of imaginary towns in the fresco-secco technique, probably modelled after earlier prints. Paintings of interesting motifs were also discovered in other rooms on this floor, depicting motifs representing various seasons, vistas, painted architectural decoration, plant ornament, curtains, marbling etc. Particularly attractive is the former boudoir, painted with blue oval medallions with depictions of mythological motifs, such as "Diana Bathing" and "Girls Celebrating Amor". The rooms of the third floor were also painted with decorative plant and geometrical ornaments, framing the monochromatic wall fields, occasionally mimicking the designs of wallpapers.

During the conservation research, remains of the historical inventory were recorded. White tile stoves from the late 18th c. had been preserved in the ceremonial hall and in the Vista Salon on the second floor. The stoves were decorated with classicist motifs, griffons, garlands and vases on their tops. The crystal chandeliers originated from the same period, while several other lamps had been preserved from the Vienna Secession period, together with a wooden stove screen, painted decorative overdoor from the lobby, and three iron cash boxes. The diversity of the palace furnishing was further demonstrated by the joinery of the doors, metalwork, cast iron fences, and decorative pulleys for lowering chandeliers.