Fort Possert, near Paz, is one of the few feudal forts in Istria featuring a preserved Gothic keep. The systematic archaeological research and conservation interventions initiated by the Croatian Conservation Institute in 2007 have provided a significant contribution to knowledge of mediaeval residential architecture in this region. The archaeological exploration, and particularly the discovered inventory originating from the period between the 14th and the early 17th c., have generated new assumptions concerning the history of the fort, and the planned completion of conservation repairs will make it possible to present this valuable monument to the public.

A project of systematic archaeological exploration and conservation interventions on the architectural remains of the mediaeval fort of Possert began in 2007. The fort, located near Paz in Istria, is also known by the names of Shabez and St. Martin. Due to the exceptionally poor condition of the remaining architectural elements of the fort, and an insufficient level of research of similar architectural complexes – and a generally poor level of research of Istrian sites originating from the high Middle Ages – the Croatian Conservation Institute became involved in the execution of this demanding project. To date, four exploration and conservation campaigns have been carried out, and their results have greatly enriched the knowledge of this site. The work has included construction repairs to architectural remains of the fort, preventing the further deterioration and unavoidable destruction that had threatened them. 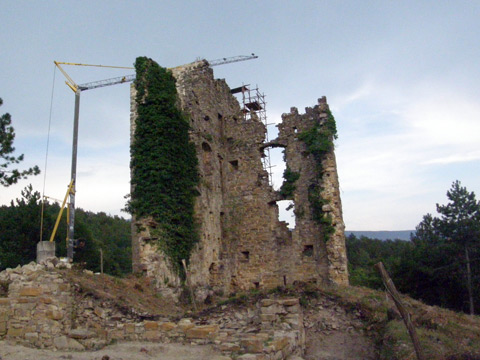 Research of the fort

The fort consists of a defence tower, with a ground plan in the shape of an irregular rectangle, located in the north-east corner of the edifice, and a partially preserved keep, leaning against the southern side of the defence tower. The access road leading to the fort used to come from the north, passing under the eastern side of the tower and the keep, and then turning westwards, along the edge of a steep slope, coming to a small building, some 20 m away from the keep. This building could have served as a guard-house, but is now completely run down. To the west and to the south of the keep, there were an external courtyard and an internal one, and to the north of it there was a moat, necessary for the fort's defence on its most vulnerable side.

Some of the walls of the keep and the tower have been preserved to their original height. The tower was 16 m high and consisted of six floors, evidenced by holes for beams, still visible even in the residential building, and loop-holes and windows in all the floors. The keep consisted of a cellar and three floors. All other walls of the fort were in complete ruin, so that the rest of the complex was only discovered in archaeological layers.

The historical data on Fort Possert are very scant and leave a number of questions unanswered. In the late 19th c., Carlo de Franceschi, a prominent scholar researching local history, made an assumption, subsequently generally accepted, that Possert can be identified with the fort of St. Martin. This name is first mentioned in the 1064 deed of donation of Emperor Henry IV, whereby he gave 20 estates in Istria, including "Villa quae vocatur ad Sanctum Martinum" to the Istrian margrave Urlich I for his loyal service. The 1102 deed of donation whereby Urlich II Weimar-Orlamünde gave most of his Istrian estates to the patriarch of Aquileia makes mention of "castrum Sancti Martini". It is assumed that this property remained in the ownership of the church of Aquileia until 1367, when it became part of Pazin County. Thereafter, the archival documents mention a fort called Possert, owned at first by the Guteneck and Moyses families, and after 1529 by the Barbo family.

In time, the fort became decrepit and unsuitable for living, and in 1529 Juraj Barbo led a renovation campaign. It is likely that a new name – Shabez – started to be used in reference to this fort at that time. However, the renovated fort did not last long. In the beginning of the following century, probably at the time of the Uskok War (1615-1617), it was significantly damaged and abandoned. Around that time, a new, notable edifice was built, again by the Barbo family. This was the Baroque castle of Belaj, located in the vicinity of the old fort, adjusted to the requirements of the new era.

Confirmation of such an account of events can be found in a print by Valvasor, depicting the situation in the second half of the 17th century: in the background of Belaj, the abandoned ruin of Shabez can be seen. This is the oldest graphic representation of the fort known today. Valvasor also mentioned Shabez in the 74th chapter of his second book, where he listed abandoned and demolished castles, and again in his 11th book, where he described Belaj: "In the immediate vicinity of Belaj there is a castle called Šabec, but it is completely deserted and run down. The piles of stones are testimony enough that there used to be a large building here and a spacious residence. It is impossible to discover why and when it was abandoned and turned into wasteland. If my hypothesis is to be accepted, I believe that Belaj was created after the fall of Šabec, and that it was developed in a more suitable and better positioned location."

The results of analysis of archaeological finds have not confirmed the assumption that Possert can be identified with Fort St. Martin. All the items discovered have been dated to the period between the 14th and the early 17th centuries. The pottery and glass artefacts could be dated, and their dating has been further supported by numismatic finds. In addition to numerous shards of late-mediaeval and early-postmediaeval crockery with glazed walls, a large quantity of shards of rough kitchenware was also found, mostly of pots. There were also numerous fragments of iron tools, such as knives, sickles and pruning knives, as well as many shards of decorated glassware.

On the basis of their main features, the glazed dishes can be classified into invetriata, painted engobed pottery, engraved engobed pottery and maiolica. Generally, all such items were imported from northern Italy, and they probably came to Possert through the agency of Venetian merchants, via ports on the western Istrian coast. Obviously, glazed pottery was not the only product that was transported to Possert from towns on the coast. Having stated this, one should bear in mind the large quantity of sea-shells observed during the excavations at Possert. Whether in some correlation to this, or independently of it, there was an exceptionally large quantity of potbellied pots with unpronounced rims rising from the shoulder of the pot, marked merely with a light horizontal articulation. This type of pot is known primarily from the archaeological context of towns on the western Istrian coast, and from there the very popular sea delicacies could be imported to the distant regions of inland Istria.

The second group of frequent finds consists of rough kitchenware. Such potbellied pots with extended and thickened rims, usually of a triangular cross-section, are primarily known from some central-European archaeological contexts, with the best parallels in the territory of today's Slovenia. Their discovery is probably a consequence of the fact that Possert was located within the Habsburg part of the Istrian peninsula.

The given dating has been confirmed by radiocarbon analysis of a coal sample taken from the oldest archaeological strata of the fort. The analysis has proven that the earliest activities on this site took place in the early 14th century.

A significant number of movable archaeological finds have been subjected to conservation treatment, which is still ongoing. These finds consist primarily of pottery shards that allow reconstruction of vessels. In addition, the corrosive deposits are being removed from all the metal finds, thus revealing their original surfaces.

Alongside the scientific study of this mediaeval residential site, the project has focused primarily on the conservation of preserved elements of the fort. The construction repairs to architectural elements of the fort have been aimed at stabilizing the walls, which had been in danger of falling down. In view of their state of preservation, in most cases it has been possible to reconstruct holes in the walls: that is, windows, doors and loop-holes. Bearing in mind the aim of presenting the entire site to the public, the conservation of the walls discovered during archaeological excavation has also been planned, since it will greatly facilitate the future visitors in their understanding of the entire architectural complex. Thus far, the eastern, western and northern walls of the tower have been repaired. The repairs of the southern wall have been planned for this year, completing the work on this segment of the complex.

Now that the project’s execution is halfway through, a significant improvement has already been noticed in the way in which the site is presented and protected. From a completely overgrown citadel, hidden by dense forest, in danger of complete disintegration, Possert has become a site worth visiting, where some elements have already been stabilized in terms of their statics, and protected from crumbling.

From the artefacts so far discovered, the construction of the fort has been dated to the 14th century, which can be linked to this estate becoming a part of the Habsburgs' Pazin County. Subsequent repairs visible on the walls of the fort can be tied to Juraj Barbo, who restored the fort in the first half of the 16th century, and it remained in use until the Uskok War (1615-1618), when it was probably demolished and abandoned. In addition to the fact that it is not mentioned in any historical documents originating from the period thereafter, the end of life at this site is also evidenced by a complete lack of any movable archaeological material that could be dated to the period after the 16th century. However, given that to date only a small section of the architectural complex has been explored, no final conclusions concerning this issue can be made as yet.

All of the above indicates that, from the point of view of mediaeval archaeology, Fort Possert is a very important and valuable site, featuring well-preserved architectural structures, which makes the importance of the construction repairs carried out, which have stabilized the walls of the tower and prevented their probable crumbling before long, self-evident. The work necessary to preserve the remaining elements of the fort has not been completed. Besides the tower, the badly damaged walls of the keep should definitely be repaired. The importance of such interventions becomes clearer if we remember that, in addition to the Pazin and Petrapilosa keeps, this is the only Gothic keep of a feudal fort in Istria in this state of preservation. Needless to say, this makes it very important for the study of mediaeval architecture. Furthermore, the preserved elements allow faithful reconstruction of the damaged parts of the walls, such as windows, loop-holes, battlements and garderobes.

Once the archaeological exploration, conservation interventions and repairs of the architectural remains of the fort are completed, and the finds processed, this late-mediaeval feudal fortified residence will be presented to the public.