Comprehensive multidisciplinary research of Veliki Tabor Castle, carried out by the Croatian Conservation Institute since 1995, has yielded new information about the castle. On the basis of the research results, long and very demanding conservation work, building and artisanal activities aimed at conserving the castle commenced in 2006. Over two construction phases, the pentagonal keep and courtyard galleries were renovated, the wall structures and all the ceilings were completely repaired, and the dilapidated roof structure and roofing were replaced. The conservation campaign encompassed wall paintings and stone elements, and the museum spaces were made operational. On completion of the second phase of work in the autumn of 2011, after nearly four years, Veliki Tabor was again opened to visitors.

Veliki Tabor is a noble castle of the Ratkaj family, situated in the vicinity of the village of Desinić. Its construction began in the 16th century, when the central pentagonal keep was erected. After 1526, during the second construction phase, a strong defensive wall with four semicircular towers was built around the keep. During the 16th c., an external defence ring was also erected, reinforced on the western side with a pentagonal bastion tower. In the 17th and 18th centuries, the interiors of the keep and towers were altered and adapted for a more pleasant lifestyle. New courtyard galleries were built, and façades were painted. After the death of the last of the Ratkajs, the castle was poorly maintained, and its condition gradually deteriorated. In the early 1990s, by decree of the Government of the Republic of Croatia, Veliki Tabor was handed over to be used by the Museums of Hrvatsko Zagorje. 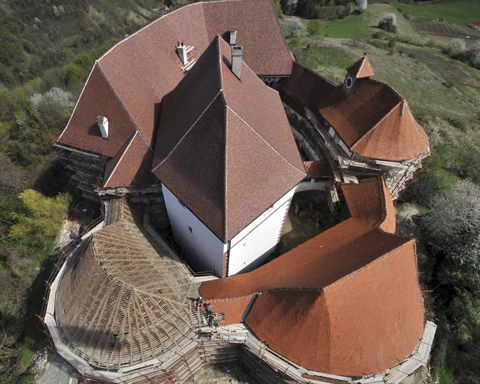 With a view to conserving Veliki Tabor, the Croatian Conservation Institute carried out comprehensive multidisciplinary conservation researchs. The first phase began with research performed in 1995, which continued in 1998. At first, the research encompassed the central facility – the keep and the façades of the courtyard galleries. Due to technical and financial circumstances, the research could not be done in its entirety at the time, but it was completed in 2006. In the autumn of 2007, the conservation of the central pentagonal keep and courtyard galleries was completed, and, after they were handed over to be used by the Museums of Hrvatsko Zagorje, they were open to the public for a short period of time. A temporary exhibition on the history of Veliki Tabor and the research and conservation performed until then was set up in the keep.

The second phase of conservation of the castle took place between 2008 and 2011. Intensive conservation researchs and reconstruction interventions encompassed the walls with semicircular towers surrounding the keep, and all the interior spaces of the towers and curtain walls, as well as their façades. The original layout of the castle was established, and subsequent modifications were discerned. Building structures, ceilings, size and shape of openings, stone elements, wooden fittings, flooring, wall paintings and painted coats on the walls, and plastered layers in the interior and on the façades, were all analysed. During the research, it was established that the castle had served two purposes, defensive and residential. Walled-in embrasures were found, testifying to changes reflected in the use of various weaponry and adjustment of the defence system. Furthermore, it was established that several layers of wall paintings depicting plant ornaments and motifs representing various seasons belonged to the 17th/18th century, the period in which the castle was adjusted for residential purposes.

Archaeological excavations led by the Croatian Conservation Institute and the Museum of Hrvatsko Zagorje were done in towers A, B, C and D. Expert analysis of the condition of archaeological wood was requested with a view to establishing whether it would be possible to conserve the wooden mass and to establishing its age. The Natural Science Laboratory of the Croatian Conservation Institute carried out analyses of historical materials: stone, plaster and paint.

The results of this research, together with proposals for the presentation of the castle and guidelines for its conservation, were published in three studies, amounting to a total of eight volumes.

The results of this research served as the basis for long and very demanding building and artisanal activities, and conservation interventions. Photogrammetric images of certain sections of the castle were made, as well as a special survey map of the entire property and geodetic surveys of the terrain. The technical documentation was compiled, and all the permits necessary for the execution of works were obtained. The wall structures of the castle were structurally repaired in their entirety, including rebuilding and injecting walls and ceilings, installing rod anchors, placing carbon ribbons in the inner and outer wall surfaces. Structural repairs to all the ceilings were also made, using carbon fibres in lime mortar. The dilapidated roof structure and tiles were replaced with new oak timber over the entire castle. Façade woodwork was installed. The building repairs to the castle were completed, and the façade above the string course was completely restored and replastered.

Conservation interventions were made on the wall paintings in rooms on the first floor of the northern wing and tower D. The plastered layers were reinforced and injected, and the plastered layer was filled in. Subsequent lime coats were removed, pulverized sections of the painting were consolidated, and the painted layer was retouched. Stone elements, such as frames of window and embrasure openings, string course, main portal and coats of arms above the main castle entrance, were all restored. The work included cleaning using various methods: mechanical cleaning of impurities and corroded metal elements, modelling of missing elements and matching of their tone, and application of protective chemical substances. Badly damaged and missing elements were carved from stone of characteristics similar to that of the original. The working spaces of the Veliki Tabor Museum were completed and made operational, and the museum storage was set in the attic of the northern wing and tower D. A boiler room for the central heating of the entire castle was built, and installation of gas, electrical power, water supply and sewage was completed. On completion of the second phase of work in the autumn of 2011, after nearly four years, Veliki Tabor was again opened for visitors.

The third phase of conservation of Veliki Tabor will consist of continued conservation of wall paintings, completion of work on façades below the string course, fitting out the interior for use as a museum or gallery, and cultivation of the castle’s surroundings.

Studies of the conservation researchs: