Croatian Conservation Institute began in 2012 with the documenting, investigating and conservation trials on the stone sculpture in the interior of the presbytery and the main apse of St. James’s Cathedral in Šibenik. A major architectural achievement of the 15th and 16th century in Croatia, the Cathedral of Šibenik has won its global recognition in 2000, when it was entered in the UNESCO World Heritage List. According to the work plan, within the next seven years the renovation will encompass the entire inner surface area and the stone furnishings of the cathedral. Taking part in the project are conservators specializing in stone sculpture, conservators (geologists, chemists, architects, art historians) from the Split Conservation Department, Natural Science Laboratory, Division for Immovable Heritage and the Research and Documentation Department of the Croatian Conservation Institute, as well as external associates.

In late 2012, investigations were conducted aiming to determine the composition of impurities on the stone, the presence of damaging water-soluble salts in the stone, test the physical properties of the stone and examine the composition of the polychromy on the stone sculpture in the interior of the presbytery and the main apse of St. James’s Cathedral in Šibenik. These investigations were a follow-up to those conducted in the late 1970ies by the then Laboratory for Conservation Research of the Conservation Institute of Croatia, an institution which fused with the Institute for the Restoration of Works of Art in 1996 to form the Croatian Conservation Institute. 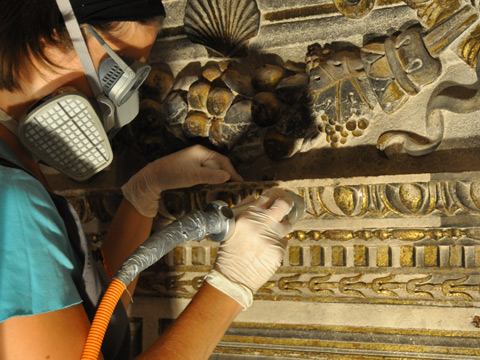 The stone itself, which was identified to be organogenic limestone, was measured for water absorption. This procedure is conducted using the so-called Karsten cylinders. As the water absorption property of a material is associated with the pore structure of that material, such measurements will provide information as to the condition of the material. The method is mainly used before and after the treatment for consolidating and protecting the stone, in order to evaluate its efficiency. The measurements indicated the minimum water absorption of the stone, as low as 0.11 ml/min.

Samples were then taken to determine the presence of harmful water-soluble salts in the stone and the joints. A chemical analysis was conducted of the anions and cations in the water solution of the samples. Apart from ions, salt mineral phases were also determined using the x-ray diffraction method. The results obtained indicated a harmful concentration of sulfates in the stone samples. X-ray diffraction identified these to by gypsum (calcium-sulfate) and thenardite (sodium-sulfate). In the joints, apart from the sulfates, chlorides were present and nitrates in harmful concentrations. Simultaneously to these analyses, thermographic imaging was conducted in cooperation with the Faculty of Electrical Engineering, Mechanical Engineering and Naval Architecture in Split, in order to determine the areas with the higher concentrations of moisture. Based on these investigations it will be possible to determine the areas which require the removal or the neutralization of salts present in the stone, and the manner in which to do it. In the joints, harmful concentrations of all salts were determined, so it was recommended that they be removed and replaced with new ones.

In addition to measuring the salt concentration, the composition and the thickness was determined of the white crusts on the stone, which had mostly formed on the projecting portions of the stone sculpture: the capitals, reliefs and mouldings. Using the x-ray diffraction method, the composition of the black crusts was determined to be gypsum and smut. An analysis of the cross-sections using optical microscopy established the crusts to be on average around 30 µm thick. The white crusts consist of re-crystallized calcite, up to several centimetres thick. The presence of these crusts, in addition to their thickness, directly indicates that water has for hundreds of years been penetrating into the cathedral interior, abrading the stone, with the dissolved calcite ultimately re-crystallizing in places where the water has evaporated.

Compositions of the pigments and the gilding from the consecration crosses in the central apse and the southern portion of the partition wall of the presbytery were determined by the method of x-ray fluorescence spectroscopy with polarization microscopy. The investigations determined the white pigment to be lead white. Yellow and red iron oxide and vermillion were used for the yellow and red pigments, and azurite was used for the blue pigment. The composition of the gilding was determined to be a gold and copper alloy.

The trials of cleaning the stone, the polychromy and the gilding were done in twenty-three areas, along with trials for the reconstruction and the grouting of the joints. Based on the research and the trials conducted, proposals were drawn up for a complete renovation of the inner surface area of the cathedral and the stone inventory, and the report was compiled on the conservation treatment of the central apse and the presbytery.

In early 2013, the first phase of conservation was launched, which included the inner surface area of the main apse with the semi-dome and the side (northern and southern) partition walls of the sanctuary. The works executed so far consisted of the removal of cement joints and deposits, the partial laser cleaning of the stone and the gilding, and the chemical removal of the polychromy. A replacement is under way of the irreversibly damaged stone blocks on the northern partition wall and a reconstruction of the relief with the Bishop’s throne motif, according to the historical originals. Until the end of 2014, a complete renovation is planned of the interior of the central apse and the sanctuary, including the main altar of the Mother of Tears. In addition to the work in the interior, preparations are under way for the consolidation of the exterior portion of the central apse’s semi-dome, in order to prevent the penetration of humidity and rainfall, which are among the main causes of stone deterioration.

The conservation works are supervised by the Conservation Department in Šibenik and the Council for Cultural Heritage, with the financial backing of the Ministry of Culture and the Šibenik Bishopric.