Conservation of the Peristyle of Diocletian's Palace in Split

The overall conservation and presentation of the Peristyle is one of the largest conservation programmes in Croatia. The project, initiated in 2003, with completion planned for 2012, has been divided into several phases encompassing all segments of the restoration of the most important element of the historical centre of Split, ranging from rehabilitation of the foundations and the structure, and the cleaning and conservation of stone, plaster and other materials, to the final presentation of this multi-layered monument. In addition to the conservation itself and the new insights gained by the researchers and the general public, the project is also significant because of the practical application of a new, scientific approach to conservation. Thus, Croatia has joined the latest trends in the conservation of stone.

On the initiative of the Division for the Old City Core of Split City Council, in 2003 the Croatian Conservation Institute began a comprehensive conservation of the architectural complex of the Peristyle of Diocletian's Palace in Split. Prior to the inception of conservation interventions, documentation was compiled, the current condition of the property diagnosed, the degree of damage and the numerous causes of deterioration of the stone were established. 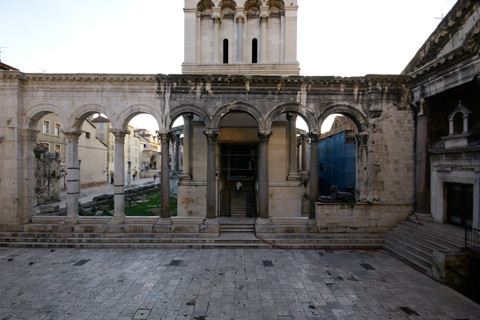 Several factors had caused the damage: the position of the building (vicinity of the sea and industrial plants), climatic conditions, exposure of prominent elements of the building to the activity of rainwater, biological colonization of stone surfaces and spaces in between construction elements, inadequate materials used in earlier interventions (iron, Portland cement), a polluted atmosphere and destructive human activity. The results of the explorations served as a basis for the selection of methods and materials that would be applied in repairs and protective interventions.

The conservation work, aimed at repair and protection of the Peristyle, began in 2004. In the first phase (2004-2005), the northern section of the eastern Peristyle colonnade was repaired. The work encompassed removal of cement patches made in previous restoration campaigns and metal elements anchored in the stone. Thereafter organic pollution was cleaned away and dark deposits were removed from the stone surface using a laser (this method allows for the original stone patina to be preserved), joints were filled, drip edges were mounted on protruding architectural elements, cracks were repaired, injections were administered, unstable stone elements were fixed, reconstructions were made in both natural and artificial stone, and desalination was carried out.

In 2006 and 2007, the work continued on the southern section of the western colonnade and the façade of the Skočibučić-Lukaris Palace, since it had been decided that its interior would be refurbished to suit the needs of the Museum of Sacred Art. During the conservation of this important stratified architectural complex, which includes, in addition to the ancient colonnade, various Romanesque, Gothic, Renaissance and Baroque elements, the only methods that were applied were those previously tested during the first phase of the work on the Peristyle. However, this situation was far more complex and demanding, because the Palace façade consisted of not only limestone and granite, but also plaster, which was in rather poor condition. During this phase of work, conservator-restorers specializing in stone sculpture were joined by their colleagues who are experts in wall painting, mosaics and stucco, and the treatment of the stone elements progressed in parallel with the work on the plaster.

In 2007 and 2008 (phase three), the northern section of the western colonnade was restored, together with the façade of the Grisogono-Cipci Palace, with the remains of the ancient arch standing by the ancient main street, Decumanus, at graound level.

In the fourth phase (between the end of 2008 and the middle of 2010), the southern section of the eastern Peristyle colonnade was restored. In parallel, the work began on St. Roch's church in the northern part of the Peristyle, which houses the Tourist Office. The restoration encompassed probing of plaster layers, reconstruction of missing elements of stone profiles in the interior, cleaning of the façade and bell-gables, and reconstruction of segments of the southern side wall, which incorporates elements of the architrave of the colonnade of the portico of the Decumanus, and the northern pylon of the final arch of the eastern Peristyle colonnade. This period of conservation was extremely dynamic: along with the restoration of the southern section of the colonnade, inception of the work on St. Roch's church, and geomechanical and archaeological explorations, scaffolding was also mounted by the northern section of the eastern colonnade to allow the necessary investigation of the condition of the repaired architecture, and the material used, five years after the beginning of conservation interventions.

In late 2009, a new phase of work began with the conservation of the façade of the Protiron, together with its Renaissance chapels, the passage leading to the Vestibule and the Vestibule's main portal. Due to the complex nature of the work and the large surface it encompasses, the plan is to complete this phase by the end of 2012. During this period, the work on the façade of St. Roch's church should also be finished. The final point of these two phases of work, and of the entire project of protection and restoration of the Peristyle, will be a solution to the issue of protection and presentation of the Egyptian sphinx, located in the south-eastern corner of the Peristyle. (During the conservation interventions, it has been protected by a wooden box).

The project, at first envisaged as cleaning of the ancient stone architecture, has turned into a complex conservation work which encompasses all the aspects of renovation and presentation of the Peristyle, from the rehabilitation of the foundations and the structure, through the cleaning and conservation of stone, plaster and other materials, to the final presentation of this multi-layered monument. The interventions performed have slowed down degenerative processes, and ensured easier reading of the decorative elements and marks left in the stone by the original tools, which were hidden by a layer of centuries-old black scab. Experts from various fields have participated in this programme, and, thanks to its scope and the several years of its implementation, it has played a significant role in the professional development of a new generation of young conservator-restorers specializing in stone.

This programme is additionally valuable for the contribution it has made to the methodology of conservation work on stone monuments. During its implementation, high standards have been set for the profession, and a new, scientific approach has been used to replace the traditional approach, based on apprenticeship. Thus, Croatia has joined the latest trends in the conservation of stone.