Votive Column of the Holy Trinity in Požega

The Plague Column – a votive monument to the Holy Trinity dating from 1749 – is a well-known symbol of Požega, and the focal point of the town plan. The column of the Holy Trinity is one of the few preserved monuments in Slavonia dating from the period. As such, it has been recognized as an important specimen of Baroque sculpture in Croatia, and it has been restored several times since the 19th c. In spite of this, the stone the monument was made of had suffered mechanical and structural damage through the centuries, and, due to adverse atmospheric conditions, it was impossible to preserve it in the open. For this reason, a facsimile has been made and placed in the square, while the original has been subjected to conservation treatment and then stored under controlled microclimate conditions. 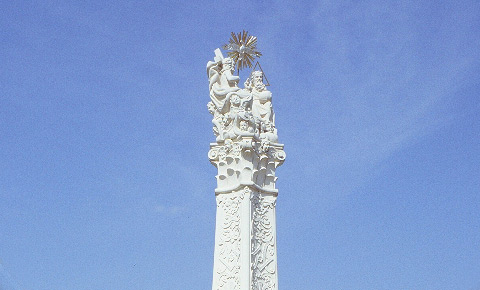 The Column of the Holy Trinity in Požega was erected in 1749, in observance of a vow against the plague which ravaged the town a decade earlier. Hence its popular name, the ‘Plague Column'. It is 823 cm high and 260 cm wide, and composed of various architectural, ornamental and sculptural segments. The monument was placed on a base, continued in a high pedestal consisting of four slightly convex sides, filled with reliefs, with interpolated votive text in Latin on the southern, western and northern sides. On each of the four corners of the pedestal there is a giant volute decorated with a naturalistic garland of pulpy acanthus leaves. The upper part of the pedestal consists of a profiled plate with inflexions; there are sculptures of St. Roch, St. Sebastian, St. Francis Xavier and St. Chares Borromeo, one on each of them.  In between the sculptures, in the middle of the pedestal, there is a smaller base with a short protruding decorative zone that supports the large column. The column narrows towards the top, like an obelisk, while its cross-section is nearly rectangular. The sides of the column are slightly concave and adorned with opulent vegetative decoration. On top of the column, there is a giant composite capital with small volutes and large elongated flat leaves. The capital serves as a pedestal for the group sculpture of the Holy Trinity, which completes the composition.

The Požega Column has been restored several times, as recorded in historical sources and confirmed by conservation investigation. It was subjected to restoration treatment in 1862, 1906 and 1943. In 1950, in an act of vandalism, the heads of all the statues on the column, except for that depicting God the Father, were destroyed for good.

Conservation-restoration work on the column

Comprehensive conservation and restoration treatment of the column began in the early 1990s, and in 2001 systematic and intensive work was performed, aimed at the renovation of the monument. Multidisciplinary exploration revealed that the monument was made of lime sandstone, which displayed signs of advanced decomposition. Due to adverse atmospheric conditions, especially acid rain and freezing temperatures, the column could not be preserved in the open. In addition, due to the generally weakened stone structure and its crumbling away into sand, it was impossible to encase it in some kind of firmer material.

After a number of assessments, a final decision was made to conserve all the preserved sections of the monument and, after its careful dismantling, store it indoors, under controlled microclimate conditions, thus preserving its features. Furthermore, it was decided that a stone facsimile copy would be made to replace it, which would faithfully reflect all the artistic, symbolic, iconographic and urbanistic values of the monument.

The long conservation and restoration investigation, which encompassed chemical analyses and mineralogical and petrographic testing of the stone, served as the basis for two studies that provided guidelines for the conservation and restoration treatment of the Votive Monument. Surface impurities were removed using a combination of mechanical and chemical cleaning techniques, after which rubber-gypsum imprints (negatives) were taken of all sculptural and architectural elements of the column. These imprints, photographic documentation and records of measurements made in situ were used to create 1:1 scale gypsum replicas of all architectural elements of the Votive Monument. Similarly, on the basis of imprints of damaged original sculptures on the column, archival and comparative photographic documentation, gypsum models were made, with missing parts and forms reconstructed using the additional modelling technique.

Gypsum reconstructions of the statues from the Votive Column depicting St. Chares Borromeo, St. Francis Xavier, St. Roch and St. Sebastian, and of the group sculpture of the Holy Trinity, were examined and approved by the Expert Commission of the Ministry of Culture. The gypsum facsimile copy of the entire monument was then used as a model for carving the facsimile copy in stone.

The facsimile copy was made in just six months from Pietro di Vicenza sandstone. This allowed the inception of the second phase of work, encompassing dismantling of the original Votive Monument in Požega, preparing a new base for the facsimile copy and mounting it. A study of the dismantling of the original monument of the Holy Trinity was prepared, and the task was executed soon thereafter. Following the successful dismantling of the original monument, archaeological excavation of the old foundation and base of the column was carried out, confirming the previous assumption about their original appearance and dimensions. On the basis of this investigation, the design was developed for a new foundation and base with stone steps. Subsequently, the new base was made of concrete and the stone facsimile copy of the column was placed on it. In parallel, metal parts of the monument were attached to it, having been coated with silver or gold. After the completion of these tasks, stairs were placed at the base of the column, carved from Kanfanar stone. The stone faces of the column base were once again inscribed with the votive text about the erection of the monument, written in Latin, and the column was protected from atmospheric conditions with a protective hydrophobic substance and an agent for firming and consolidation of stone.

The conserved original column of the Holy Trinity has been stored temporarily on the premises of a Požega company which can ensure optimal microclimate conditions.