Croatian Conservation Institute conducted a survey of the site of Crkvišće in Bukovlje near Generalski Stol. A church that was researched stands on top of a Bronze Age hill fort settlement. The entire plateau with the hill fort, stone ramparts and the church is situated in an excellent geostrategic position of the Mrežnica River bend opposite the Old Town of Zvečaj.

The survey was financed by the Ministry of Culture and overseen by Krešimir Raguž of the Conservation Department in Karlovac. A toponym of “Crkvišće” is popularly used to mark a memory of a particular church, usually dating before the Ottoman period. As the study of the medieval period in continental Croatia is relatively neglected, this archaeological survey presents a move forward in correcting that fact and casting new light on historical data that are still missing. 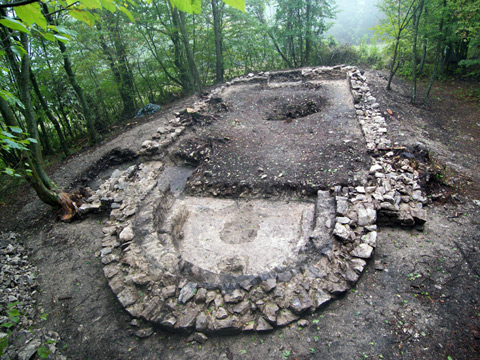 The research was led by Dr. Ana Azinović Bebek, head of Archaeological Heritage at the Croatian Conservation Institute. It lasted two weeks with the research team including Petar Sekulić, archaeologist and historian, along with 7 manual labourers.

The single-nave church measuring 15x7.5 m has a semi-circular apse and two entrances – one on the southern and the other, main entrance, on the western front. Walls of the church have been preserved between 40 and 60 cm in height, while the foundations were laid were shallowly, only 40 cm in the ground. In the sanctuary, plastered remains of a subsellium, cathedra, sacrarium and what was probably an altar rail were discovered. According to style characteristics the church can be dated to the Late Antiquity period.

Remains of the church show no traces of destruction, but rather of a careful dismantling of stone furniture. In addition to traces of the furniture removed that were found in the flooring of the church, a small carving chisel was also discovered, which could have been used for the same purpose.

These findings corroborate the popular legend according to which the altar and the bells of the church were transferred to the former parish church of St. John in Zvečaj.