The Story of the Dubrovnik Bronze Jacks

These movable bronze sculptures of mythical soldiers struck the hours on the Dubrovnik City Bell Tower, built in 1444-5, for more than four centuries. They are believed to have been cast around 1478, nineteen years before the making of the bronze Moors which strike the hours on the Torre dell'Orologio in Venice to this day. The quality of their making classifies the Bronze Jacks as first-rate monuments of culture. The ravages of time, climatic conditions (air moisture and salts, oscillations in temperature) and repeated inexpert repairs have called for urgent conservation intervention on the statues.

The History of the Dubrovnik Bronze Jacks

Mechanical puppets made of wood or metal – jacquemarts (Jacques with a hammer) – which were added, along with bells, to the city clocks on belfries of churches, city halls, loggias, gates or freestanding towers, after the end of the 14th century, rang the bells as they moved, or simply adorned the clocks. They often depicted two soldiers, the twelve apostles, or the four horsemen of the Apocalypse, and their appearance followed the fashion and style of the period. We can find them on public clocks in several European cities (Dijon, Bern, Oxford, Moulins, Prague, Venice). 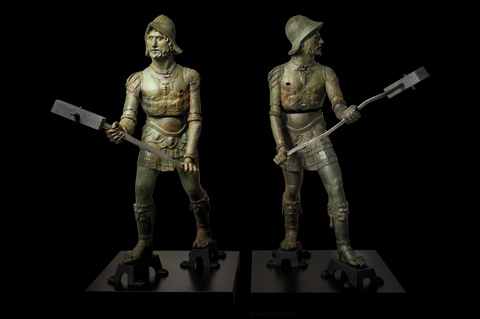 The statues on the Dubrovnik City Bell Tower, locally known as Maro and Baro, and more widely known as Zelenci (the Greenies), due to the bronze patina they have acquired over time, rank among the first-rate works of Renaissance sculpture. They are the only bronze sculptures from that period in the territory of Croatia and are also the southernmost example of statues functioning as jacquemarts in Europe.

Within the 1477-8 bell tower renovation, master Giovanni Francesco of Bergamo made a new clock mechanism with 16 gears and a moon-phase indicator, and Michele di Giovanni of Fiesolo, who had been working as a founder of cannons and bells in Dubrovnik for some twenty years, cast a new bell in 1478. Given that, in 1477, the Small Council of the Dubrovnik Republic passed a resolution on the creation of two male bronzes to strike the bell, which would replace the existing wooden sculptures with hammers, coated in metal sheet, dating from 1444-5, it can be assumed that the assignment was given to the same master who cast the bell.

The two statues, 191 cm in height, face one another like reflections in a mirror, to strike the bell in the belfry harmoniously. The statue on the left has its right leg slightly forward and raises its right arm, holding the hammer, while the position of the right statue is the opposite. The exactly-proportioned sculptures, whose limbs, from the feet upwards, are completely subservient to the action, are dressed in Roman military uniforms which closely follow the anatomy and body positions. The attractively-fashioned clothing features elaborate relief ornamentation and is three-dimensional, and the iconography of the motifs decorating it can be viewed from all sides. In addition to the helmets on their heads and the breastplates, with depictions of Triton and Medusa as the central motif, there are also shoulder straps and short skirts with overlapping rows of metal pteriges with the repeated motif of a Gorgon's face, and knee-high knemida decorated with lions' heads. The Greenies look like mythical heroes, tough soldiers symbolically defending the City and the Republic. The realistic presentation of the human figure reveals that this is a product of very high-quality 15th-century sculptural work in this region.

After a series of strong earthquakes in the 19th century, the one that hit Dubrovnik in 1905 caused so much damage to the upper part of the bell tower that it threatened to cave in. The jacquemarts were moved to the Sponza Palace (to the then Municipal Patriotic Museum), and the following year the bell tower was shortened by nearly half, the upper section with the dome completely removed. Because of their deterioration, in the 1920s the Greenies were subjected to restoration.

Research and Conervation Work on the Statues

Due to unfavourable climatic conditions (air moisture and salts, oscillations in temperature) and repeated inexpert repairs, especially the inadequate restoration in the 1920s, it was concluded that the jacquemarts called for urgent professional and comprehensive repair.

The Croatian Conservation Institute initiated its conservation research of the jacquemarts in 2001, by taking samples for chemical analysis and performing radiography. In 2003, the years of comprehensive conservation interventions on the left-hand statue began. The sample analysis had indicated that the bronze was of poor quality and showed the presence of various types of impurities and compounds such as chlorides, oxides and sulphates, all of them products of weathering factors working against the surface of the statues. The X-ray diffraction had revealed products of corrosion, with the most problematic being the most frequent: atacamites and paratacamites, which cause slow, long-term development of corrosion, the so-called ‘bronze disease’.

The surfaces of the statues were covered with layers of impurities, chlorides and oxides, the leg segments were destabilized by cracks and fractures, the fractures had been fixed with wire, and the statues were filled with an undesirable filling with high sulphur content. In this condition they were dismantled and brought to the Workshop for Metal of the Croatian Conservation Institute.

It was established that both statues had been made using the same method, by casting the upper and lower parts of the body separately, and subsequently linking them from the inside in the abdominal section with a mechanism that enables the hammers to strike the bell.

In the first phase of conservation, the left-hand statue was subjected only to the necessary cleaning procedures, such as removing deposits and oxides from the external surface, while the damaged places were treated and conserved. In 2004, while conservation work was still in progress on the left-hand statue, the Dubrovnik jacquemarts were displayed at the Croatian Renaissance exhibition in the French National Museum of the Renaissance in Château d'Écouen near Paris, as the only Jacques with a Hammer ensemble from the period in the Mediterranean region. In the same year, they were also displayed in the Klovićevi Dvori Gallery in Zagreb, after which the left-hand statue was returned to the conservation workshop of the Croatian Conservation Institute for further treatment. The right-hand statue was received by the workshop in 2007, and in the following years it was subjected to the same conservation treatment as the left-hand Greeny, with the intention of achieving a harmonized appearance for the sculpted pair.

The external surfaces of both the upper and lower halves of the statues were cleaned, as well as the internal steel torsion mechanism, and other elements of the ensemble: the hammer holders and the base. Impurities and corrosion products were removed mechanically, using restoration brushes, scalpels, and also solvents, with the utmost attention paid to the preservation of the original stable patina.

Particularly demanding was the procedure of removal of the composite filling put into the statues' legs during the restoration intervention in the 1920s. The restorers of the time believed that it would contribute to the stability and consolidation of the statues. Analysis established that the filling was composed of stones, sand, concrete, gravel and brick, originally bound together with liquid sulphur, which got through the cracks to the external surface of the statues.

Once the cleaning was completed, the six-monthdesalination of the jacquemarts began, with the aim of slowing down and stopping the process of corrosion. During the desalination, samples were taken regularly and analysed at the Natural Science Laboratory of the Croatian Conservation Institute, until it was established that no chemical changes or chlorides were present in the water. The sculptures were once again cleaned mechanically and, where needed, treated with copper-corrosion inhibitors and copper alloys. The internal steel torsion mechanism, hammer holders and bases were also cleaned and repaired.

Once the bronze walls of the statues were stable in respect of corrosion processes, the cracks, especially those on the feet and lower legs, were consolidated with reversible Araldite resin (Arametal), which was additionally reinforced with brass braces and bronze screws. The breaks and cracks were then retouched, and the colours of the two statues were harmonized. Finally, the entire surface was coated with microcrystalline wax, a protective conservation layer necessary on works of art that are displayed indoors.

The high demands of the programme of conservation interventions are reflected in the comprehensive approach to the renovation of the pair of Renaissance bronze statues, which had been used intensively for centuries, exposed to all different weather conditions and the strong activity of seaside air rich in chlorides. Given that this is a pair of statues, the conservation treatment had to be the same for both of them, and their final appearance had to be harmonized. For this reason the work was done in parallel, as far as possible, with the necessary testing interventions carried out on one statue, to prevent a possible reappearance of oxides or any other unanticipated chemical reaction, which might jeopardize both statues.

The several years of effort invested in the conservation of the Greenies was presented to the public in the exhibition Restored Heritage: the Dubrovnik Bronze Jacks – Restored Renaissance Statues from the City Belfry, displayed in the Zagreb Museum Of Arts and Crafts in July 2009.

Since May 2010, the original Greenies have been displayed within the permanent exhibition of the Cultural History Museum in the Rector's Palace of Dubrovnik.