A valuable specimen of a Baroque chest of drawers from Villa Sorkočević on the peninsula of Lapad has been conserved in the Furniture Workshop of the Croatian Conservation Institute. The massive chest of three drawers with discontinuous façade, decorated with inlays of figural and plant ornaments, belongs to a type of chest characteristic of northern Italy in the late 17th and early 18th centuries.

As an item of furniture which functionally replaced the coffer, the chest of drawers appeared in the second half of the 17th century. Originally, it was intended for keeping bedding in bedrooms, but with time it became an important piece of furniture which was decorated and positioned in rooms for show. In France, where it stood by the wall, it was veneered and inlaid with marquetry on three sides, allowing a combination of diverse techniques and materials. In addition to a common, simply veneered chest of drawers, there were also richly decorated items, adorned with incrustations and bronze reinforcements (Boulle technique), and with a marble slab instead of the inlaid top panel. 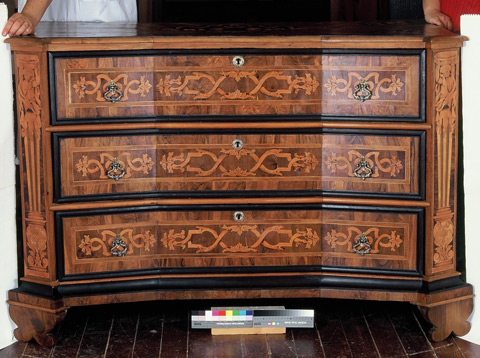 The chest of drawers is an item of furniture characteristic of the entire 18th century. In time, its shape, size, number of drawers and its position changed. Its development can be traced from the heavy rectangular chests with four large, deep drawers in the Baroque age, through smaller chests with lowered 'bellies' and short cabriole legs, to Rococo chests of the bombé shape, standing on thin high legs and featuring two drawers. The evolution of that type of chest resulted in a new piece of furniture: the secretaire, with a writing surface and lid in its upper section, and the secretaire with an additional upper double cupboard. Yet another type of secretaire was the tabernacle, with a closed upper niche and with side drawers on both sides.

In Germany, the first chests of drawers were made in the early 18th century. In contrast to French chests, which had only two drawers at the time, the German had three, four, and even five drawers. In the 17th c., English chests of drawers were very simple, mostly made of oak wood, with small carved ornaments and profiles. The chest of drawers with the compound, discontinuous front is characteristic of northern Italy in the late 17th and early 18th centuries. This chest belongs to that group. It belongs to the Croatian Academy of Sciences and Arts, and is located in Villa Sorkočević in Dubrovnik.

Three drawers, broken at an obtuse angle, are flanked by drawers with oblique edges and inlaid motif of Atlas shouldering an architrave. The horizontal profiles of the drawer edges are highlighted in black. The chest of drawers is veneered with olive-tree veneer and inlaid with a combination of carob (darker surface), hazel and maple wood. Interestingly, all the veneer is autochthonous, originating from the coastal region. Given that the visual method does not always suffice to identify the type of veneer, a strong magnifying glass and the so-called keys for microscopic tree identification were used to establish the type of veneer. Experts of the Tree Anatomy Institute of the Faculty of Forestry also participated in the process. It was all necessary for the reconstruction of missing elements. Unfortunately, the olive-tree veneer was the only one available for reconstruction, while various fruit trees were used to replace hazel and carob wood.

Prior to the conservation, all the damage on the chest of drawers was recorded, and gas-disinfection was performed. Many pieces of the marquetry were missing, and the entire surface was very dirty. For the most part, the protective varnish did not exist. The thick veneer had separated from the base in many places, and it was reattached before any other intervention. The chest's structure was stable and did not require any major carpentry work. All the gluing was done with the usual warm bone-hide glue (animal glue), which is reversible and thus can be removed at any moment. The surfaces were cleaned using ethanol and fine steel wool, since there were no thick coats of varnish or paint that alcohol could not remove. A number of fillers and later interventions to the marquetry were found. They were all removed with the aim of making reconstructions of materials that would have a minimal impact on the original. After the careful cleaning of the surfaces, reconstructions of the missing elements were made in suitable wood. The marquetry patterns were copied onto paper, and these paper copies were used to cut volutes and wreaths using a fine hand saw, which were then glued to corresponding places in the original. All the reconstructed elements were of a visibly lighter colour than the original, so they were retouched with an alcohol-based stain. Small holes bored by wood insects, and other damaged surfaces, were filled with putty prepared from chalk, natural pigments and animal glue used as a binder. Several putties of different colours were prepared, corresponding to different types of veneer, to minimize the need for subsequent retouching. A day after the putty and retouched places were dry, the entire surface of the chest of drawers was coated with Vaseline oil, which is light and colourless. In addition, it is absorbed by the wood and refreshes it, highlighting its natural tones. The oil was also left to dry overnight. Once dry, the chest was coated with two coats of orange shellac to protect the retouch from water and other adverse factors. The final coat consisted of several layers of wax. Since most of the reinforcements and locks were missing, new metal pieces were modelled after the original and patinated. The reinforcement was also protected by varnish.