Conservation and Restoration of the Polyptych of St. Martin by Vittore Carpaccio

St. Martin's Polyptych, created by a master painter of Italian Renaissance Vittore Carpaccio for the Cathedral of St. Anastasia in Zadar, is an artwork of great importance for Croatian and world cultural heritage. Recent comprehensive conservation of the damaged polyptych undertaken at the Croatian Conservation Institute strived to restore the original value of the masterpiece. 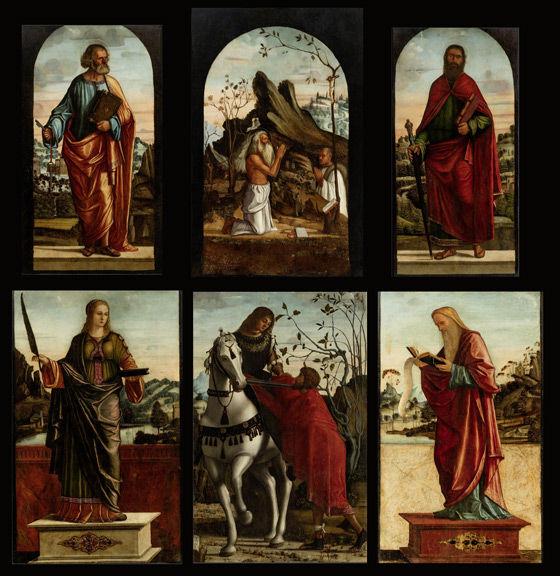 At the end of the 15th century, Martin Mladošić, canon, notary and archpresbyter of Nin from Zadar, one of the most prominent Church officials of the time, responsible for the spread of Renaissance art in the city, commissioned the polyptych from the great Italian painter Vittore Carpaccio from Venice (c. 1460 – 1526) for the altar of St. Martin in Zadar Cathedral of St. Anastasia.

The polyptych is composed of six paintings on wood with depictions of individual saints in two registers. In the central part of the lower register is the titular of the polyptych, St. Martin, flanked by patron saints of Zadar, St. Anastasia and St. Simeon. The upper register consists of paintings of St. Peter, St. Paul, and St. Jerome. According to records from 1746, during visitation by the archbishop Mate Karaman, it can be assumed that a painting of the Blessed Virgin Mary was once in the uppermost register, but it has since been lost. The author’s signature is in the lower left part of the painting of St. Martin: (vic)TORIS (c)ARPATTII (ve)NETTI OPUS. Ornamental frame, originally connecting polyptych paintings, was created by a local master Ivan of Korčula.

Historical interventions on the paintings

Published texts and photographs on the polyptych of St. Martin by Croatian and Italian authors enable a chronological understanding of interventions on the polyptych, from the separation of individual paintings in the 18th century, during the renovation of St. Anastasia’s Church, through first amateur restoration, overcleaning, artificial patination and overpainting, to its, almost complete, devastation during the Second World War.

Overpainting recorded in photographs from 1906 (carried out by using colours for refreshing wagons) altered the painted layer to such an extent that contemporary art historians questioned the authorship of certain paintings of the polyptych. The size of the paintings from the upper register was increased to match the ones in the lower register. For the same reason, the semi-circular ending of the paintings in the upper register was reshaped into a rectangle. The overpainting was executed in an inferior style and technique, by using rough wide brush strokes with crude, pronounced contours. Forms of the original painting were not followed, while details were painted arbitrarily and clumsily despite the good condition of the original painted layer.

First recorded restoration of St. Martin’s polyptych was carried out in Venice in 1924. A complete intervention was executed, using, amongst other methods, the removal of overpainting by fire, i.e. the application of burning ethanol extinguished by cloth. After the restoration, the paintings were set in gilded ornamental frames that were kept until next interventions.

Most extensive damage to the paintings occurred after the Second World War when a large part of the painted layer was lost due to exposure to severe and sudden oscillations in humidity and temperature when they were moved from a humid shelter to a dry attic. Two restoration interventions, performed in 1948 and 1963 at the Restoration Institute of the Yugoslav Academy of Sciences and Arts in Zagreb, were needed to repair the damage.

Even before the preparation of the artwork for the exhibition “Renaissance in Croatia” held in 2004 at the Musée national de la Renaissance in Château d'Ecouen, it was evident that a conservation of the polyptych paintings after the Croatian War of Independence (1991 – 1995) was necessary. During the Croatian War of Independence, the polyptych was exposed to indirect structural stress caused by frequent strong detonations during the bombing of the city.

The painted layer of all polyptych paintings was darkened and extremely soiled. It was diminished by smaller and larger remains of overpainting from the beginning of the last century, and by rough, crude, and obtrusive retouches from later restoration interventions. Also, large parts of the original painted layers were gradually overcleaned, finishing lazures or deeper painted layers were destroyed all the way to the underpainting or the ground layer. Traces of burned surfaces caused by cleaning of the overpainting by fire during the 1924 intervention were still visible. The undertaking by restorers from Zagreb in the years following the Second World War, marked by numerous shortages and traumas, who tackled the restoration of the six paintings where the painted layer has risen more than one centimetre and was falling apart at even the lightest touch, is praiseworthy. Large surfaces of paint were completely disintegrated and scrambled. However, the use of large amounts of wax, at the time common in restoration, was subsequently found to be inappropriate and incompatible with the original painting materials, causing additional and irreparable damage. This was manifested in visible clusters of wax, an extremely uneven surface texture of certain paintings, and in the wrong position of the fragments of the damaged painted layer. The retouching carried out on wax over time turned into dark and oily stains.

X-ray and IRR imaging, conducted in Zagreb, enabled the understanding of Vittore Carpaccio’s painting technique, i.e. his work process, from the underpainting to the finished piece. It also confirmed the presence of various types of patina (natural and artificial), even though the natural patina on some paintings by Carpaccio was damaged (and with it the painting) due to overcleaning and the need to make the painting look new. Analyses of samples of the painted layer were performed at the Opificio delle Pietre Dure in Florence. Results of research confirm author’s tendency to experiment and apply combined painting technology, developed at a time when new painting mediums were discovered, leading to revolutionary changes in the world of painting.

Polyptych paintings suffered significant mechanical damage throughout its history which manifested differently in certain segments on each painting. Furthermore, subsequent interventions and restorations changed the original properties of all constructive parts of the paintings. Such condition required an individual approach to each painting, as well as the adjustment of procedures to a particular current condition in order to achieve a uniform result of the unobtrusive intervention. This primarily concerned the balanced cleaning of painted layers where fragments of previous overpaintings, overcleaned surfaces, and preserved darkened natural and artificial patina were intertwined. For that reason, the procedure was carried out by using mechanical methods with the help of a stereo microscope. Identification of natural patina and thinning of its discoloured surface layers required special attention. Each additional cleaning would cause damage to the original finishing lazures and details of the painting.

Extremely complex combined retouching technique, which does not permit the use of white colour in the finishing lazure and transparent varnish layers, demanded a total reconstruction of the damage in the gouache underpainting layer with precise tonal modelling that could not be corrected afterwards. Similar to watercolour retouching technique, in the finishing phase of the combined technique, performed by using varnish colours, tonal gradation and desired colour is achieved by overlapping thin tratteggio strokes which are neutralised and become visually identical to the original by layered repetition.

The application of wax as a consolidation agent in previous restoration intervention, which was heated and applied in its liquid form, did not allow necessary softening of the original water-based preparation. Because of its short curing time, it was not possible to correctly position fragments of preserved paint. During the attempt to level the raised parts of the painted layer, due to previously mentioned reasons, clumps of wax were formed. The complicated procedure of repairing such damage was performed by gradually heating the surface and transferring the fragments to their original position. That was possible only in parts where there were no dimensional shifts of the wooden support, i.e. its lateral narrowing.

During previous restoration, the wooden support was thinned and under additional burden due to an oversized cradling. For that reason, it was necessary to make a new, specific cradling that would adapt to the thinned paintings and concave deformations caused also by improper attempts in mechanical levelling of distorted paintings during previous intervention.

Conservation and restoration research and works began in 2003 under the supervision of Jadranka Baković, consultant conservator-restorer, and lasted until 2016. This project was included in the internal plan of educational cooperation of the Zadar workshop with distinguished experts, restorers from Florence Stefano Scarpelli and Giovanni Marussich. Later they were joined by a renowned conservator chemist Carlo Lalli.

Although the direct motivation for the restoration of the polyptych was its fragile state caused by indirect damage during the Croatian War of Independence, its conservation and research greatly exceeded the limits of standard procedures. Several years of studying the multi-centennial history of the polyptych, its beauty and subtle technical solutions in its creation, changes and repairs, as well as 20th-century restorations, are joined together in a unique project “Renaissance Microcosm: Polyptych of St. Martin by Vittore Carpaccio”. In September 2017, Croatian Conservation Institute nominated this project for the European Union Prize for Cultural Heritage / Europa Nostra Awards in category Research.