The altarpiece of the Madonna with Child and Saints Catherine, Magdalene, Peter, Dominic and Andrew was painted for the main altar of the Dominican church of St. Mary in Bol on the island of Brač. It was painted by the workshop of the great cinquecento master Jacopo Tintoretto. The altarpiece was restored in 2003 at the Croatian Conservation Institute, due to the fact that the painting was damaged, the multiple “improvements” during the 19th and the 20th century rendered the original painter’s expression illegible, and layers of dirt had accumulated.

Archival documents recorded that in 1561, in the time of prior Pavao Andronić, a decision was made to procure a painting for the main altar of the recently finished Dominican Church of St. Mary in Bol in the island of Brač. According to S. Krasić and cited by K. Prijatelj, the incentive to procure a painting came from the eminent Dominican Luka Polovinić, better known as Fra Luka of Brač. He departed for Venice the same year, to commission an altarpiece from a renowned Mannerist "maistro Jacomo Tentoreto depentor" for 270 ducats. 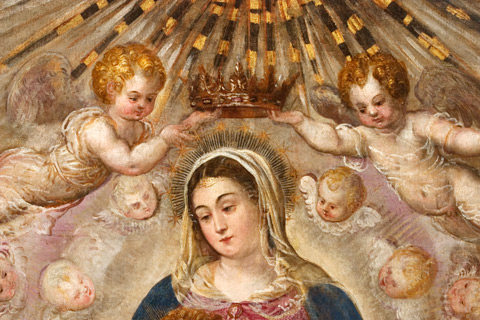 The altarpiece is nowadays kept in the Monastery collection. The painting depicts the Madonna with saints, being crowned by angels, while the Child in her lap is handing out an engagement ring to St. Catherine. To the left of St. Mary, St. Magdalene is standing with a bowl of ointment in her hand. In the lower section of the painting, four saints are depicted: St. Peter and St. Dominic on the left and St. Paul and St. Andrew on the right.

An unusually detailed and comprehensive documentation on the altarpiece recorded some earlier repairs that painting had been subjected to. In the 19th century, it underwent restoration in Vienna, then again in 1969 in the conservation workshop of the former Regional institute for the protection of cultural monuments in Split. According to K. Prijatelj, it was on this occasion that “a successful cleaning returned the altarpiece, to the extent to which it was possible, to its original appearance and…disclosed, particularly in the details, some thus far hidden graces, concealed by time and dirtiness…”.

The latest conservation treatment of the altarpiece and its decorative frame was undertaken in 2003 at the Split Department for Conservation of the Croatian Conservation Institute. It was then it was discovered that during the 1969 restoration the painting had been lined onto a new canvas using a wax mixture. Oil overpaints and retouches were found on the face of the painting, along with the remains of previous varnishes. The whole surface of the painting was covered in a layer of dirt. Injuries to the canvas had been puttied with carnauba wax, and some even earlier chalk putties were also discovered.

The painting was detached from the lined canvas, its back side was thoroughly mechanically cleaned from the remains of the wax paste. Old wax and chalk putties were also removed, and the accumulated surface dirt was removed from the face of the painting, together with the layer of varnish from the previous treatment and the remains of even earlier varnishes, retouches and overpaints.

Once the canvas was successfully cleaned from the remaining wax, it became possible to line the painting by using another method. Prior to the lining, the damaged canvas was consolidated by inserting inlays of the new canvas. As the canvas was seriously deformed, it was decided to line the painting with the so called Florentine paste, a traditional method of lining paintings, whereby a large amount of moisture is introduced into the painting, enabling all deformations of the canvas and the paint layer to flatten out. All injuries to the paint layer were reconstructed with a glue-chalk preparation, followed by retouching and applying the final protective coat of varnish.

The gilded, moulded decorative frame was damaged in several areas. The wood was consolidated with a synthetic resin solution, the unstable zones of the gilding were underglued and stabilized. Surface dirt was removed and the missing and lost parts were glued back or reconstructed. All the injuries and the whole surface of the bare wood were covered with a new preparation onto which bole was applied, along with 23.5 karat gold leafs. The new gilded surfaces were distressed in order not to stand out from the original surfaces of the frame.