Conservation and restoration works on the painting and the decorative frame brought back to life the original appearance of the portrait of the Bishop of Hvar Joakim Maria Pontalti. Kept in the museum of the Bishopric, the portrait is a work of an unknown 18th century Venetian painter. The artwork was seriously endangered by the deformation of the canvas and the flaking of the paint layer.

The Carmelite Joakim Maria Ponalti (Gioacchino Maria Pontalti, Verona, 1709 – ?, 1772) became the 42nd Bishop of Hvar, having been in service for thirty years. In 1767, while he was leaving his position as bishop, his portrait was painted, and is nowadays kept in the library of the Bishopric in Hvar. The portrait is a work of an unknown 18th century Venetian painter. 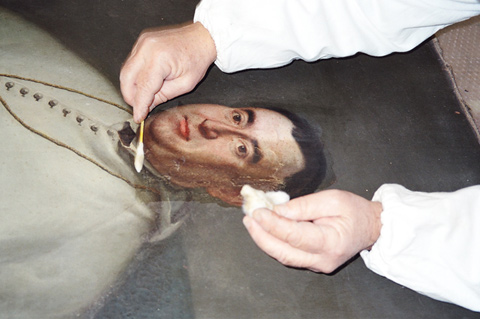 Painted in the oil on canvas technique, the portrait depicts the bishop seated at his desk and looking at the viewer. On the desk there are depictions of the bishop’s mitre, a bell, glasses and a book held by a bishop with his right hand. The painting is framed by a moulded, carved and gilded decorative frame.

Condition of the painting prior to the conservation treatment

The wood of the decorative frame was also considerably damaged by woodworm activity. It was unstable, flaked to the touch and needed to be consolidated. Joints of the frame bars were weakened, with carvings missing partially or completely from the zone of the joints. A series of smaller injuries to the preparation and the original polyment gilding were visible on the surface of the frame, while the gilding had fallen off the prominent portions of the frame, caused by handling and rubbing when it was cleaned. There were tiny dark smudges over the entire surface, residues of insect droppings.

In 2006, the complete conservation and restoration treatment of the painting and the decorative frame was performed at the Split Department for Conservation of the Croatian Conservation Institute.

The next phase of the treatment was to remove the discoloured layer of varnish from the face of the painting, in addition to the mechanical cleaning of insect droppings with a scalpel. Injuries to the canvas were recovered by inserting and gluing processed pieces of new canvas. Thus prepared, the painting was lined on a new canvas and glued with Florentine paste. It was stretched onto a new wedge frame and the missing parts of the preparation were restored. After the isolation layer of damar varnish was applied, retouch was executed with pigments bound with damar varnish, and finally the painting was sprayed with ketone varnish.

Surface dirt was removed from the face and back side of the decorative frame. The unstable woodworm-infested wood was consolidated from the back side with a solution of synthetic resin Paraloid B72, which gave it back the wanted level of firmness. Separated elements of the frame were glued together with two-component epoxy glue, with an addition of crushed sawdust as filler. Missing parts of the ornament were reconstructed with two-component epoxy putty. All injuries were treated with a chalk-glue preparation toned with brown pigment, and the gilding was reconstructed. Over the surface of the reconstructed preparation a coat of bole was applied, as a base for the gilt. Gold leaves and gold powder were used, subsequently toned with bitumen, in order for the surfaces of the new gilt not to stand out too much from the original.