The conservation of six paintings with scenes from the life of St. Domnius, a martyr from Ancient Salona is coming to an end. The paintings from the choir of the Cathedral in Split were painted by Pietro Ferrari in the 17th century. Due to a high degree of damage these large-format canvases had suffered, they became an object of complex conservation and restoration treatments, which had been carried out at the Institute since 1998.

About the cycle and its painter Pietro Ferrari

The cycle of six canvas paintings from the choir of the Cathedral in Split was painted by Pietro Ferrari, who was active in the region of what is now Croatia between 1683 and 1685. He painted a cycle of narrative scenes from the life of the martyr St. Domnius. The themes were drawn from the life of the saint which is read on the day of the saint’s feast, the 7th of May. “St. Peter Sending St. Domnius to Dalmatia” is the first painting of the cycle, followed by “St. Domnius Preaching Christianity at the Salonitan Forum”, “St. Domnius Baptizing the Salonitans”, “St. Domnius Healing the Sick Before the Eyes of the Prefect Maurilius”, “The Martyrdom of St. Domnius” and “The Death of St. Domnius”. 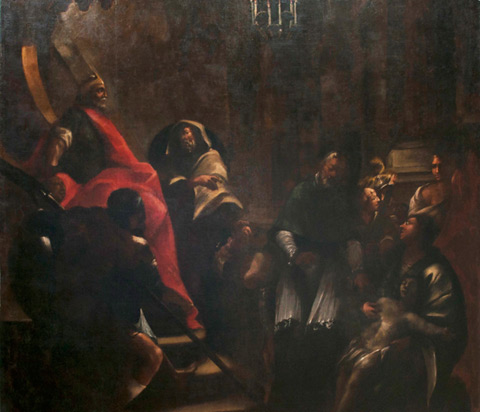 Ferrari was commissioned for the paintings by Archbishop Stjepan Cosimi between 1683 and 1685, while he was staying in Split. Little has been researched so far about the painter during his stay in the region. He was first mentioned in 1858 by Ivan Kukuljević, who discovered the painter in the account records of Archbishop Stjepan Cosimi. Pietro Ferrari had likely been a travelling artist, a common practice at the time. Archbishop Cosimi refers to him in his notes as “Pittor Epis(copi)“ – the Archbishop's Painter. Aside from the six paintings, Ferrary received payment for the repairment of four paintings from the cathedral and some works in the archbishop's home.

Visual renderings of the narrative cycles of the lives of saints are a common sight in Dalmatian Bishoprics of the 17th and 18th century. It is however important to mention that Ferrari’s paintings are the only complete cycle of works depicting the life of a local patron saint, which makes them, regardless of their modest quality of execution, very important in terms of religious and cultural history. The cycle of St. Domnius was meant to link the tradition of the Split Bishopric back to Ancient Salona (one of the paintings depicts the scene of “St. Domnius Baptizing the Salonitans”), the time of the apostles and of St. Peter who had sent St. Domnius to this region. The large canvases fill the entire wall surface of the sanctuary, modulating it in the manner of Biblia Pauperum of the time.

In his book on Dalmatian art (“Studije o umjetninama u Dalmaciji III“), Kruno Prijatelj pointed to an engraving by French artist Claude Vignon (1593 - 1670) which seems to have been a direct model for the composition of „St. Domnius Baptizing the Salonitans“. It is also likely that Ferrari quoted more prominent artists while composing other paintings of the cycle.

The chronology of treatments

Much like the rest of art from the Cathedral of Split, the paintings of the cycle have been repaired many times throughout their history. Records survive of the end-of-1929 and the 1962 restoration.

An academically trained painter Don Josip Šunje cooperated with the former Conservation office for Dalmatia to restore the paintings in 1929, for which he received a payment of 3.000 Dinars. A document mandating the treatment is still kept in the archives of the Conservation Department of the Ministry of Culture in Split.

In 1962, the paintings were restored by Filip Dobrošević in the workshop of the former Conservation institute for Dalmatia. Dobrošević used a wax mixture to paste the paintings onto a new canvas. The wax treatment was frequently used in the middle of the 20th century but had an irreversible effect, as exemplified by this case.

Pre-existing condition of the paintings

All the paintings have a history of same or similar problems, as a consequence of the technology that was used to make them and the treatments they were subjected to.  Common to all of them was the high degree of damage.

The original flax canvas which was medium thick and of uniform weave carried a relatively thin paint layer. The large format of the paintings (305×220 cm; 305×305 cm) was obtained by putting together three stripes of canvas, with vertical seams visible on the face of the paintings. It should be noted that the painting of “St. Peter Sending St. Domnius to Dalmatia” was lined with a synthetic green-colour canvas (such as was used for sunblinds). Other paintings were lined with flax canvases. The paintings were given new stretcher frames in 1962, but this failed to provide enough support as it was poorly done, and contributed to the canvases deforming and becoming lax.

The thin paint layer consists of oil paint applied over a preparation of dark ochre. The stability of the paint layer was provided by a wax-resin mixture, which completely saturated it and bound it to the canvas. As opposed to the contemporary conservation practice, all injuries to the canvas and the paint layer were filled with thick layers of wax putty. This type of procedure is nowadays changed for a method of inserting pieces of new canvas which are shaped to fit the injuries.

Traces of the two mentioned restoration treatments were visible on the surfaces of the paint layer. Ever since the 1929 treatment by Don Josip Šunje could there be seen traces of dark putty and retouch in places of injury on the faces of the paintings. The retouch of Filip Dobrošević’ was laid down directly onto the layer of wax putty. Since the painting was reconstructed with pronounced lines (trateggio), it clearly set out the wax from the homogenous surface of the original painting. Lining with wax-resin mixture left even more damage to the painting. In order to paste the painting onto a new canvas, high temperature and pressure had to be used. All the traces point to the conclusion that a combination of heightened temperature and pressure was applied to the faces of the paintings and that the temperature was too high. This caused irreparable damage to the paint layer. The damage is irreversible and all that can be done is to “disguise” it by retouching.

In the latest treatment, the paintings were varnished with a solution of some kind of new natural resin (damar of mastic), applied in a thick layer. As it had aged, the resin turned yellow and greatly changed the tone of the painting.

The conservation treatment at the Institute

The conservation and restoration treatment was aimed at removing traces of all materials and procedures applied in the previous restorations, and consolidating the injuries by using appropriate conservation methods.

The first phase of the treatment comprised the cleaning of the paint layer prior to detaching it from the canvases to which the paintings were glued. The cleaning included the removal of: the surface dirt, the thick layer of varnish, the retouches from previous treatments, the wax putties and the wax-resin mixture which penetrated onto the faces of the paintings and the removal of the brown putty from the 1929 treatment.

It was the properties of natural resins of damar and mastic that made it possible to easily remove the thick layer of varnish, through combined action of acetone and ethanol. Even though these types of natural resins also change and “age” with time, even after a hundred or more years they enable restorers to remove them with solvents that pose no serious threat to either the artwork or the health of the restorer. The same solvents were used for removing F. Dobrošević’s retouches. It was obvious that the same resin solution had been used both as medium for binding the pigments and as varnish for the paintings.

Wax putties and layers of wax were removed from the faces of the paintings by combining mechanical and chemical methods. Apart from thinning the wax layer with scalpels, a gel based on turpentine oil was used and proved successful in removing the wax without damaging the original painting.

To remove the 1929 retouch, ammonium-hydroxide was used. It was obvious that these retouches were executed with paints that contained oil. As it ages, oil oxidizes and polymerizes, so it is necessary to use somewhat stronger solvents to dissolve an old layer than to remove the fresh layer of oil.

Having been thoroughly cleaned, the faces of the paintings were protected with non-acid paper. The paper was glued to the surface of the paint layer with a synthetic dispersion of Plextol B500, which was to ensure its stability while the back side was cleaned. After a lined canvas was removed, the thick layer of wax-resin paste was thinned by scalpels. Wax residues that the canvases had absorbed were cleaned with the gel earlier mentioned, based on turpentine oil.

Missing parts of the original canvas were replaced by inserting flax canvas patches, whose weave was more similar to the original. The original canvases were extensively damaged and extremely brittle. Such a condition made it necessary to line the paintings with new canvases. A wax mixture was used for the lining (beeswax, colofonium and Venetian turpentine). The lining was done by pressing the back sides, accompanied by constant temperature monitoring, to preclude any possibility of damaging the paint layer with heightened temperature.

All the paintings were stretched onto new frames which will provide optimum stability and tautness. The preparation of the damaged zones was reconstructed under oblique lighting, to achieve full integration of new surfaces into the texture of the surrounding paint layer. This was followed by underpainting with gouache and tempera and applying damar as insulation varnish. Retouch was executed in varnish paints, and the paintings were sprayed with varnish based on synthetic acrylic resins.