Polyptych by Paolo Veronese in Vrboska on the island of Hvar

The 16th-century paintings by Paolo Veronese, conserved in the Croatian Conservation Institute, belong to one of the wealthiest painting collections of Dalmatia, which is kept in the church of St. Lawrence in Vrboska on the island of Hvar. They belong to the polyptych of the main altar. The complex multiannual conservation project encompassed eight paintings on wood and canvas which originally made up the polyptych, and a wooden gilded tabernacle which is believed to have belonged to the unity of the polyptych.

Vrboska is one of the picturesque localities on the island of Hvar. It is situated at the bottom of a deep and well-protected inlet. The isle in the middle of the inlet and the old stone bridges connecting the two shores of the bay have earned this village its nickname of "little Venice". Originally, Vrboska was the inlet of the nearby village of Vrbanj, located slightly further inland, and that is how it got its name (the Inlet of Vrbanj, Vallis Varbagni, or, in Croatian, Varbonjska Vala). Varbonjska Vala was mentioned as early as 1331, in the Hvar Municipal Charter of that year, but the settlement in it came into existence in the 15th century. 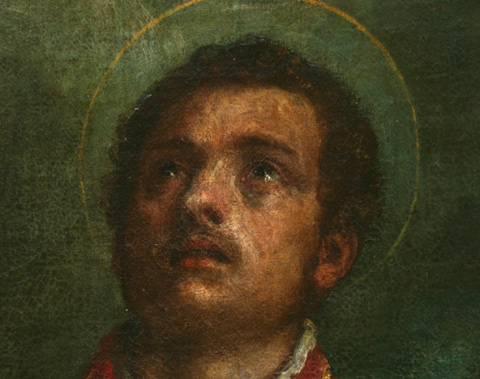 Despite the fact that it is a small locality, home to fishermen and farmers, Vrboska houses an extraordinary artistic collection which testifies to an awareness of the valuable and the beautiful which has been rooted deep in the everyday life of the local population for centuries. By ordering precious works of art, they have enriched their churches, their religious life and their local community. The wealth of art has not even been diminished by the destruction that Vrboska has suffered through history. The Venetian navy attacked the settlement during the national uprising of 1512, and in 1571 the Turks plundered the village and the entire island in the aftermath of their defeat at Lepanto.

The polyptych by Paolo Veronese is kept in the parish church of St. Lawrence. The church was built in the 15th century and thereafter extended twice, with the current appearance dating from the 17th century. The parish church was looted and burnt down in both the Venetian and Turkish attacks. Regardless of this, it houses one of the wealthiest painting collections in Dalmatia, especially when the quantity and quality of its works of art is correlated to the size of the locality and its population. The valuable artwork has been collected thanks to the orders made after the church had been devastated.

Nowadays, the church is also home to the paintings which used to adorn the altars of the nearby church-fortress of St. Mary of Mercy, which, due to the poor condition of its structure and the high relative humidity of the air in its interior, does not provide appropriate conditions for keeping art. Thus, the altars and walls of St. Lawrence's church are now decorated with a number of precious altar screens. The main altar features the paintings from the polyptych by Paolo Veronese. The side altars and walls are used for keeping works by Venetian and Croatian masters: Our Lady of the Rosary by Leandro Bassano; The Resurrection of Christ and The Descent from the Cross by Giuseppe Alabardi; The Nativity of the Holy Virgin by Antonio Scuri; Our Lady of Carmel by Stefano Celesti; The Homage of the Magi, The Birth of Christ and St. Anthony in Ecstasy by Celestin Medović; and Our Lady of Carmel by Marko Rašica. The church also keeps votive paintings by seamen, Stations of the Cross by the Austrian sculptor J. Adihardt, the altar of the Name of Jesus with a 17th-century crucifix and a statue of Our Lady of Health. On the church ceiling, in the 18th century, an anonymous artist painted the scenes of God and Father and The Crowning of Mary, surrounded by church dignitaries and evangelists. In the church treasury, there is a beautiful Baroque silver crucifix, made by Tiziano Aspetti, and a collection of church dishes and relics. The church also houses the stone sculpture of St. Peter, dismantled from the façade of the church of the same name. The statue has been attributed to Nikola Firentinac (Nicholas of Florence). Above the main entrance to the church, there is a recently conserved Baroque chorus with organ.

The current appearance of the polyptych is the result of restoration treatment in the late 19th century. In 1895, to be precise, the original wooden architecture of the polyptych was replaced with a marble altar by the sculptor Ivan Rendić. However, not all the panels of the polyptych could be fitted into it.

Nowadays, there are three canvas paintings above the main altar. The central one depicts St. Lawrence, and above it Madonna with Child and Angels. The side panels depict St. John the Baptist and St. Nicholas. Beneath the lateral panels, on the altar predella, there are two small paintings on poplar wood; St. Lawrence Brings the Poor to Prefect Valerian and The Torture of St. Lawrence.

When the wooden elements were replaced by the marble ones, the planes from the attic of the former frame were removed: a triangular representation of God the Father and two compositions of irregular shape depicting Angel Gabriel and the Virgin Mary on a prie-dieu in a scene of Annunciation. Those three pictures are nowadays kept in the church sacristy.

In his text written in 2004, Vladimir Marković included the tabernacle in the polyptych unity. The tabernacle is kept on the altar mensa in the right nave of the church, beneath an altar screen by Leandro Bassano, depicting Our Lady of the Rosary. The gilded wooden tabernacle is only 59 cm high, square-shaped, with a dome on top and vaulted edges. It includes three small paintings on wood. The one on the right-hand side depicts an angel with arms spread, holding a hanging lamp and a nail from Christ's grave. On the left-hand side, there is a representation of an angel walking, with a hanging lamp in his right hand. The painting on the front side of the tabernacle depicts an angel holding the dead body of Christ.

The oldest document discussing the dating of the polyptych is that by P. Kuničić of 1902, and his hypothesis was confirmed by G. Gamulin in 1955. Namely, when the Turkish army ransacked Vrboska in 1571, the parish church was burnt down. In 1579, the apostolic visitor and bishop of Verona, Agostino Valier, came to Vrboska and mentioned, in his notes, a "beautiful painting" of St. Lawrence on the main altar of the church. This means that the polyptych was created sometime between the Turkish attack of 1571 and the apostolic visitation of 1579. If we take into consideration the fact that it had to take several years for the community to recover from the Turkish invasion and to collect the funding necessary to order new works of art, the period between 1576 and 1578, mentioned by Kuničić and Gamulin, is a very logical time frame for the creation of the polyptych.

When Emperor Franz Joseph I visited Dalmatia in 1875, he met a delegation from Vrboska. At the parish priest's request, the emperor promised that the Imperial Art Academy would take care of the repair and cleaning of the polyptych paintings. Just a year later, the request came from Vienna to send them the artwork. But the parish priest and local population did not allow the paintings to leave their village. Several years later, Don Frane Bulić addressed the Central Commission for Historical and Artistic Monuments in Vienna with a plea to reconsider the need to restore the Vrboska paintings. The Vienna Commission sent the restorer Eduard Gerisch to Vrboska to examine the paintings and establish their condition. On the basis of his report, the Commission allocated 1400 crowns from state funds for the restoration of the paintings. Gerisch returned to Vrboska and worked on the paintings from 12 August to 5 September 1900. The paintings were cleaned, retouched and coated with new varnish. The canvas paintings were relined with new canvas. Only the painting of St. John the Baptist was damaged so badly that it had to be restored in Vienna.

In the period between Gerisch's restoration in 1900 and the early 21st century, no significant repairs were made to the polyptych paintings. The entire polyptych was subjected to a comprehensive conservation treatment only in the recent intervention of the Croatian Conservation Institute. The extensive intervention began in 2000, with the conservation of the tabernacle. The predellas were conserved in 2002, and the paintings of the Annunciation and God the Father in 2003. The central painting, depicting St. Lawrence, was conserved in 2004, and the work was completed in 2005 with the conservation of the side panels of the polyptych: the paintings of St. John the Baptist and St. Nicholas.

The architecture of the tabernacle was stable, and it only called for consolidation, cleaning and some minimal reconstruction. However, the treatment of the three small paintings on poplar wood was very demanding. The blue background in these paintings was completely covered with oil paint. Oil retouches were also present on the bodies of the angels and Christ. The paintings were covered with a layer of darkened varnish, with the remains of an older varnish beneath, more difficult to dissolve. Due to the instability of the original painted layer, the cleaning was performed under a microscope. Regardless of the small surface, the combined mechanical and chemical cleaning took a long time.

Similar problems were encountered during the cleaning of the painted layer of other polyptych paintings on wooden support – two paintings on the predella, two paintings of the Annunciation and the depiction of God the Father. On all of them, there were traces of careless retouching in oil paint and several layers of varnish. The last of the varnish coats was easily soluble, but the remains of older varnish demanded the application of stronger solvents. Once again, the instability of the painted layer of these paintings called for very careful cleaning.

All the paintings on wood had been reinforced at a later time with transverse planks fixed with nails from the front. These reinforcements were removed during the conservation treatment. The joints and cracks in the wooden planks of the support were repaired with V-profiled wooden lattices inserted from the back into canals of appropriate shapes and sizes that were gouged manually.

The three oil-on-canvas paintings of the polyptych – the central depiction of St. Lawrence and side paintings of St. John the Baptist and St. Nicholas – were relined in 1900 by E. Gerisch, with new canvas glued with a starch mixture. On that occasion, the paintings were retouched with oil paint, but the old varnishes had not been removed, nor had the gesso been reconstructed. During the treatment in the HRZ, the paintings were detached from the canvas used for relining. The remains of the starch paste were cleaned from the back of the paintings, and their faces were cleaned of impurities, retouches and all the layers of varnish. The damage to the canvas was repaired by inserting new pieces of canvas of a similar thickness. Because of the damage and degradation of the original canvas, the paintings were relined anew with the traditional Florentine paste technique.

On all the polyptych paintings, the damage to the painted layer was reconstructed with glue-chalk gesso. Retouching was made with pigments bound with retouch medium on a base of ketone-resin varnish. The final varnishing consisted of matte varnish applied by spraying.