The Parish Church of the Assumption of the Blessed Virgin Mary in Vis on the island of Vis keeps fragments of a polyptych that once adorned the main altar of the church. Its author is the Renaissance painter Girolamo da Santa Croce. Surviving panels of the polyptych, a large central composition depicting the Sacred Conversation being among them, along with the parts of wooden polyptych architecture were restored in the Croatian Conservation Institute in 2001 and 2002.

What has survived of the polyptych to this day?

The polyptych ensemble from the altar of the Assumption of the Blessed Virgin Mary Church in Vis on the island of Vis, better known as Our Lady of Spilica is assumed to have consisted of seventeen panels framed by wooden architecture and adorned with all’antica ornamentation. To this day seven paintings have survived: the central and a side panel, along with the predella with five smaller paintings. All the paintings were executed in mixed media of tempera and oil on wood. The central panel depicts the Virgin and Child, God the Father, St. John the Baptist and St. Peter. It is framed by a gilded wood-carved frame. The only preserved side panel is the one depicting St. Stephen the Pope and it is partly damaged. The central panel of the predella used to serve as door of the tabernacle, as testified by a keyhole. The panel carries a depiction of Imago Pietatis and the four side panels depict the apostles and brethren. 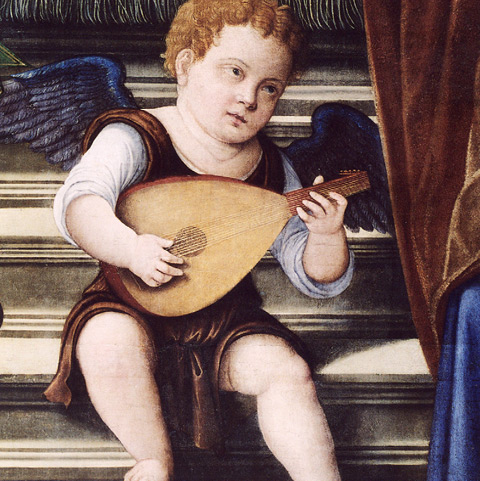 In 1937, Dorothea Westphal, an art historian who studied the attribution problems of important works of Dalmatian painting between the two world wars, attributed the remains of the polyptych to the workshop of Girolamo and Francesco da Santa Croce, father and son, but singled out neither as the author. In 1957, Kruno Prijatelj described the polyptych in detail and decided for Girolamo (Santa Croce near Bergamo, 1480/1485 – Venice, 1556) as the author of the piece. Judging by the 1834 visitation by Bishop Ivan Skakoč, the polyptych was probably dismantled in the beginning of the 19th century, to make room for a new stone altar.

As conveyed by Radoslav Tomić, it was Ivan Ivanišević (1608 - 1665), a vicar to the Bishop of Hvar and a poet, who described the original appearance of the polyptych on the 14th of May 1650. According to that description, the lateral panels flanking the central painting with the depiction of Sacra Conversazione were comprised of two rows. In the bottom row of the right side, there were two panels. One depicted St. Stephen the Pope, patron saint of the Hvar Bishopric, which also included the Island of Vis, the other depicted St. Francis of Assisi. Above them, two minor panels depicted St. Luke and St. Sebastian. In the bottom row of the left side of the polyptych, there were depictions of St. Nicholas and St. Dominic, and above them panels depicting St. Rocco and St. Mark. The attic of the polyptych contained a depiction of the Birth of Christ. Ivanišević’s description of the polyptych mentions the Birth of Christ scene in plural. This lead Cvito Fisković to assume that the depiction consisted of three successive scenes: Birth, Adoration of the Shepherds and Adoration of the Magi. Based on the surviving parts of the polyptych and Ivanišević’s detailed description, it was possible to make a drawing of the assumed original appearance of the polyptych, which was published by Radoslav Tomić in his paper on the piece.

To the extent that venerations of the depicted saints were commonly practiced in Dalmatia during the 16th century, it may be assumed that the content of the polyptych was determined by the commissioners, most probably the brethren who used to gather at the church and were portrayed in the predella.

The central painting depicts the theme of the Sacred Conversation – Sacra Conversazione. The Virgin is seated on a stone throne raised high, with two angels above it carrying her crown. The base of the throne is covered with a red carpet, with the painter’s signature written between the fringes and the ornaments. Even though it is damaged, letters are clearly recognizable: IERONI (…….) A., which is suggestive of HIERONIMO DA SANTA CROCE. God the Father is shown hovering over the composition and blessing with palms spread. He is depicted against a background of a white cloud, surrounded by eight winged heads of angels. In the sky, on the side of the throne, two praying angels are depicted. An angel playing the lute is sitting on the stairs beneath the throne. Figures are placed on a terrace of marble slabs and in the background there is a landscape of blue hills and low vegetation. The blue expanse of the sky scattered with clouds has filled almost the entire surface of the painting. In the foreground, beneath the Virgin’s throne, two saints are standing. On Mary’s left-hand side is St. John the Baptist and opposite of him is St. Peter.

Characteristic of Santa Croce’s painting is the variation of the cannon he had once set. The figures are always shown to express graciousness and melancholy, with visible influences of Giovanni Bellini and Cima da Conegliano. It is well known that some painters, those of more modest artistic abilities in particular, tend to repeatedly use their previous painterly solutions. According to R. Tomić, the roots of the altarpiece from Vis could be traced back to Santa Croce’s painting of the Virgin and Child Enthroned with St. John the Baptist and St. Nicholas from Lucera. There are a number of similarities between the two paintings. The composition is quoted entirely and figures of St. John the Baptist are almost identical. The figure of St. Peter, on the other hand, shows remarkable similarities to the depiction of St. Joseph from the altarpiece of the Virgin and Child with Saints from the Church of St. Mauro in Izola. And a “twin” of St. Peter form Vis is kept in New Haven, but that piece certainly belonged to a larger ensemble. Both saintly portraits were in turn taken over from Bellini’s altarpiece in the Church of San Zaccaria in Venice.

Girolamo da Santa Croce’s tendency to repeat his own solutions does not only apply to the ways he depicted the figures of saints or how he worked out the compositions of narrative scenes. The artist quoted himself even in how he designed the entire compositions of polyptychs. The polyptych from Vis thus copies the solutions and the appearance of the polyptych Girolamo had made in 1535 for the main altar of the Franciscan Church in Košljun in the island of Krk.

An overall conservation and restoration treatment of all surviving parts of the polyptych was carried out in the Croatian Conservation Institute workshop in Split, in 2001 and 2002. Just a glance of the artwork clearly reveals traces of previous interventions, both on the paintings and on the surviving parts of polyptych architecture. In his text from 1964, C. Fisković stated that a note recording a restoration in Vienna stood on the back side of the panel depicting St. Stephen the Pope.

The wood of the polyptych was partially degraded by woodworm activity. Wooden boards which comprise the central panel were deformed in a convex manner and partially detached from the background structure. The paint layer was extremely unstable. It had detached from the wooden support and needed to be underglued. A whole range of oil retouches was visible on the surface of the paint layer, especially in the upper part of the painting with the depiction of God the Father. The painting was coated in varnish which had turned yellow with time. The entire face and back of the painting were covered in layers of surface impurities, both bound and unbound.

The same type of damage could also be seen on other panels of the polyptych: the panel depicting St. Stephen the Pope and the five smaller panels of the predella. The depiction of St. Stephen the Pope was painted on a single wooden board which had deformed convexly. The paint layer was lost in all the edge zones and in the entire bottom quarter of the painting, and on the smaller panels of the predella it was damaged by vandalism. Specifically, the figures on all the panels were covered in scratches incised with a sharp object.

The only surviving portions of the polyptych architecture were the columns and the gable which framed the central painting, along with the lateral volutes. The frame was brought to the Croatian Conservation Institute in parts. All the parts were original, aside from the lateral volutes and the triangular portion of the gable, which were a later addition. The wood was largely damaged by woodworm activity and called for a thorough consolidation. A large number of the smaller fragments of the wooden support had been lost. The original layers of the preparation, the bole and the gold leafs were considerably damaged, with a series of overpaints covering the injuries. The layers of gilding and polychromy were unstable and detached from the wooden support. The entire surface of the frame was covered in impurities.

The conservation treatment started with the undergluing of unstable gilding and polychromy on the whole surface of the polyptych. It was followed by cleaning which consisted of removing the surface dirt, the layer of varnish and old retouches off the paintings, together with a series of overpaints, off the frame. The retouches in the upper portion of the painting with the depiction of God the Father were removed with a surgical scalpel, under a microscope. All overpaints from the gilded frame were removed mechanically, using a surgical scalpel.

The wood of the polyptych was subjected to gamma-irradiation to prevent further damage due to woodworm activity. A thorough consolidation of all parts of the polyptych was done with the Paraloid B72 epoxy resin. From the back side of the central painting, an old supporting structure was removed and a new parquetry was made, consisting of 340 wooden mounting pads and 5 wooden traverses. This structure connected all parts of the painting into a whole and provided them with stability. Minor injuries to the wood were filled with putty and larger areas were reconstructed by inserting and pasting new pieces of wood. The preparation was reconstructed in all the areas of damaged gilding and polychromy. Damaged polychromed surfaces were retouched and, in the zones of the gilding, bole was applied over the new preparation, onto which gold leafs were laid down. The surviving original parts of the polyptych architecture were reassembled. Subsequent additions, such as the side volutes and the triangular gable, that were removed in the beginning of the treatment were not returned onto the frame. After the treatment was finished, the polyptych was returned to the church of Our Lady of Spilica in Vis.