The "great forgery" of the Ohmučević Family Tree, dating from the 16th c., which, according to some historians, marks the beginning of Illyrian heraldry, has been conserved in the Croatian Conservation Institute. The document was written on a sheet of paper which was attached – rather significantly – to the back of a 15th c. painting by Lovro Dobričević, depicting the Bosnian king in the persona of a donor. When received by our workshop, the condition of the Family Tree was very poor. Demanding conservation procedures have been used to separate the document from the wooden base of the painting, and then restore and protect it.

On the back of a 15th c. painting entitled Christ and the Donor, by Lovro Dobričević, attached to its wooden base, there was a document showing the family tree of Bosnian and Serbian kings and the coats of arms of Illyrian lands, with an additional coat of arms of the aristocratic family of Ohmučević, which fled from Bosnia during the Ottoman conquest in the late 15th c. and moved to the Dubrovnik Republic. 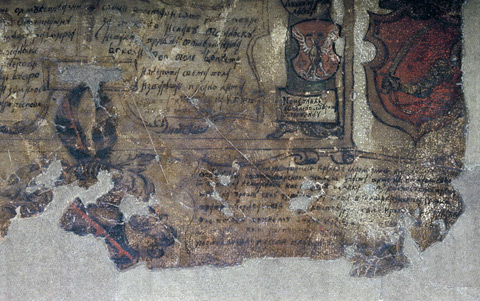 In addition, the document comprises a text, written in Bosnian Cyrillic script (bosančica), on the history of Bosnia and Herzegovina to the time of its occupation by the Ottomans. Although the year 1482 is marked on the document, it is believed that it was ordered by Petar (Ivelja) Ohmučević in the late 16th century, to convince the authorities of the aristocratic origin of his family, tying them to some important individuals and families in the Balkans. The fact that the document was attached to the painting Christ and the Donor was meant to strengthen its authenticity, since the donor was recognized as the Bosnian king Stjepan Tomaš.

The archival records note that Bishop Strossmayer received the painting by Dobričević, together with the document, from Franciscan friars of the Kraljeva Sutjeska monastery in Bosnia, in 1871. The painting was thus included in the collection of the Strossmayer Gallery of Old Masters of the Croatian Academy of Sciences and Arts in Zagreb.

Damage to the document

The damage to the document was extensive and diverse. Wax stains on the upper and lower edges were consequences of wax deposits on the back of the painting. The entire surface of the document displayed mechanical damage caused by cuts made with a sharp object, and a number of tears. Furthermore, the painted coat was also damaged, the paper had been creased, and consequences of previous restoration interventions were also visible.

Prior to any treatment, it was necessary to analyse the composition of the document’s base and of the adhesive used to attach it to the back of the painting. In addition, micro-cross-sections had to be taken to establish the exact composition of layers and decide on conservation procedures.

The results of the analysis showed that the document was attached to the painting with starch glue, and that the textile fibre in the paper was of a linen origin. The micro-cross-sections revealed another layer on the paper base. Further analysis established the presence of proteins in it, indicating that this was gelatine. The conservation method which would be applied to the Family Tree was specified in line with the test results obtained. A special challenge during the separation of the document from the back of the painting and its consolidation was posed by the need to work out a way of protecting the gelatine layer on the face of the document, whereby the document would preserve its authentic appearance. All the phases of the procedure had to be adjusted accordingly.

The conservation treatment began with the separation of the document from the back of the painting, using the facing technique. Gradual moistening activated the starch glue which had been used to attach the document to the back of the painting, thus making it possible to slowly remove the document, while at the same time protecting its face. Subsequently, the front and back of the document were cleaned, but, since the document was probably coated with gelatine, wet cleaning could not be used. For this reason, the cleaning was done with an organic solvent (96% ethyl alcohol), while, on the back, gel was smeared over the remnants of the glue, which were then mechanically removed. Wax remnants, observed in the middle of the upper and lower edges of the document, were removed using the hot procedure. Numerous tears, creases and missing sections suggested that the document had to be consolidated with a new paper base. Doubling with Japanese paper was done using a method which ensured that the paper base of the document was laid on a new base without activating the gelatine on the surface. The consolidation was made by coating the document with gel, which softened the document so that it could 'lie' on the consolidating Japanese paper over its entire surface. Once it was consolidated, the missing sections of the document were reconstructed and subsequently toned to correspond to the prevailing tone of the whole.

After the completion of the conservation treatment, the document was laid in a protective folder, customized for its safe storage and display, and it was returned to its owner, the Strossmayer Gallery of Old Masters.