A valuable print by a 17th-c. artist, unidentified at the time, was discovered accidentally in the monastery of St. Francis in Split. The artefact was in very poor condition, which called for urgent conservation intervention. Although this motif is frequent within the Franciscan iconography, the discovered print is a significant contribution to its artistic heritage, given its unusually large dimensions; it was actually composed of several print sheets. Such a composition demanded certain adjustments to the conservation treatment carried out by experts of the Croatian Conservation Institute in 2007. Subsequent art-history processing attributed the print to the Italian master Giovanni Battista Bonacini. 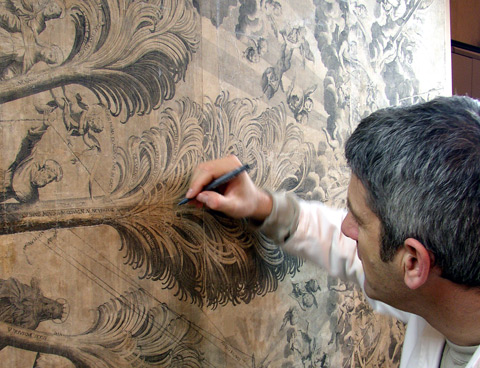 "…The conserved print – previously unknown – with the motif of the Franciscan family tree makes a new contribution to the artistic heritage of the monastery. Its large dimensions also contribute to its importance, since the print as an art form is limited by the size of the matrix. Therefore, this print consists of several smaller ones that were placed together to form a complex and iconographically stratified composition.

…The motif of the Franciscan family tree is frequent within the Franciscan iconography. It shows the structure and evolution of this Order through history. In comparison to other examples dating from the period between the 15th and 20th centuries, the Split composition is more complex.

The print is clearly based on a very strong and well-founded theological programme. In view of the fact that the print was dedicated to the learned Fra Felix Rotondo, it must have been designed by the Padua Franciscans, and this is also suggested in one section of the damaged text. This highlights the local context of the history of monks in Dalmatia. For artistic forms in the service of theology to be diverse and programmed in nature was very common in the late 17th c. In addition to the rich composition and figures of Franciscan saints, other important elements include a number of identification inscriptions defining the less well-known Franciscan orders and groups. Such detailed data and their chronology will undoubtedly be of interest to the Order's historians."

(Zoraida Demori Staničić, M.Sc., from the catalogue of the exhibition  "Conservation of the Franciscan Family Tree print")

The Franciscan Family Tree print, 173x125.5 cm in size, was discovered by accident in the monastery of St. Francis (Sv. Frane na Obali) in Split. The monastery's collection of sacred art contains a range of exceptionally important artefacts. The condition of the print was very poor; it was creased, dusty and damp, and thus called for urgent conservation intervention. Due to its size, the poor quality of the material it was made of, and poorly done lining with paper in some later intervention, the print presented a real challenge to the conservator-restorers.

Damage to the artefact

The print consisted of eight print sheets, backed with canvas, and later also with brown paper of poor quality. No data concerning that treatment has ever been found. The hand-made paper the imprint was made on was worn, as was the canvas. In the lower section, the paper was dripping, as a result of its chemical deterioration, physical damage and inadequate storage. All the paper had turned yellow and become brittle from acids which had penetrated it from the canvas and brown paper that the print was backed with. Damage caused by humidity was also visible, as well as a number of water stains and fly excreta over the entire surface. The print sheets had been folded, resulting in creases, tears and cracks. The small cracks were only visible in transmitted light.

Certain pieces of print sheets were missing. The largest missing parts were to the right of the depiction of the palm tree and in the lower left section, where the result of the poorly made repair was also visible. Unfortunately, due to that subsequent intervention, the name of the artist is now illegible. Following art-history analysis, Zoraida Demori Staničić has attributed the print to the 17th-c. Milanese graphic artist Giovanni Battista Bonacini.

Surface impurities were removed using a soft eraser, brush and scalpel. Various detailed analyses were made, and a pH value of 5 indicated that acids were present. An ink stability test showed that the ink used was insoluble in water and ethyl alcohol. The glue on the back of the print was also analysed, and the presence of starch glue between the original paper and the canvas was confirmed, while the brown natron paper had been attached using animal glue, which in some places penetrated through all the layers and emerged on the print face. This combination of different adhesives made the removal of canvas and paper from the back of the print much more difficult. With a view to facilitating the separation of the eight pieces of the print from the backing, and protecting its face, the facing method was applied, using thin Japanese paper. The back was cleaned of glue with warm and cold vapour and warming with an iron applied over moist blotting paper.

Usually, when wet procedures are applied, all pieces of a print are treated together, but on this occasion that would have been impossible because of the condition of some of the pieces of the print. Impurities, water stains and some of the acids were extracted from the paper of the more damaged elements of the print using wet treatment on a suction table, while the central four elements were treated with floating technique, in order to better remove acids, left-over glue and stains. Neutralization was carried out by spraying the print face and back with calcium hydroxide. Each of the print pieces was backed separately with Japanese paper on a vacuum table.

A large number of tears and missing pieces of paper were filled with hand-made paper of suitable colour and thickness, produced of natural materials. Replacing the missing elements did not present a problem, but returning the print to the subframe was a very important and most demanding phase of work. The appearance of the edges suggested that the print used to be stretched over a subframe, and it was decided to use the same procedure. Prepared linen canvas was stretched over a wooden subframe of a suitable size, and Japanese paper was glued onto it. Special attention was paid to avoiding thick joints, and thus the paper was previously cut with a "water cut". The Japanese paper was coated with methyl-cellulose adhesive, and then moist pieces of the print were laid on it one by one. Once the print was dry, joints were patched over, and retouched.

This demanding conservation project was carried out in 2007 in the Dubrovnik Department of Paper Restoration of the Croatian Conservation Institute. Following the restoration, the print was displayed in the Franciscan monastery of St. Francis in Split.