Terrestrial and Celestial Globes from the Franciscan Monastery in Dubrovnik

It is normal for a conservation workshop specializing in items made of paper to receive books, documents, watercolour paintings and drawings, but a globe is a very rare and demanding challenge for a conservator-restorer. Here is a brief history and a structural presentation of the globe, and an overview of all the phases of conservation interventions on the Terrestrial Globe (1835) and the Celestial Globe (1770) by Robert de Vaugondy, geographer to Louis XV, kept in the library of the Franciscan Monastery of Friars Minor in Dubrovnik.

A brief history and technology of globe-making

A globe can show not just the Earth, but also constellations. The first attempts to present stars in this way have been attributed to Egyptian astronomers. In the 7th century B.C., the Greek scholar Thales took from the Egyptians the method of constructing a globe. The oldest preserved celestial globe is the Farnese Atlas, a Roman marble sculpture of Atlas carrying the globe on his shoulders. It was made between the 1st and the 2nd century as a copy of a Greek version of the globe from the 4th-3rd c. B.C. It is kept in the Naples National Archaeological Museum. Thereafter, globes were made of metal (as were sfere armillari, or armillary spheres, astronomical instruments consisting of metal rings attached to a focal point – the Earth – where each ring represents one of the main celestial trajectories). They were usually made of brass – for example, those of Arabian production – but there were also some made of precious metals, such as silver and gold. Luxurious items of that kind were gifts offered to kings and princes. The most modest specimens were made of wood. 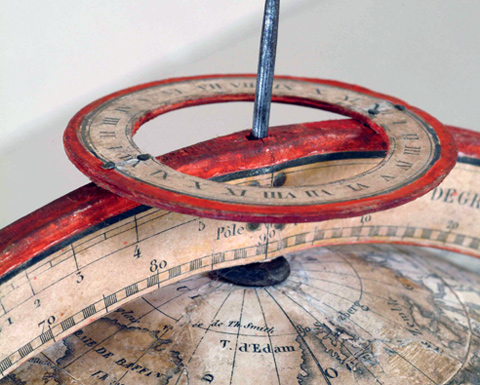 In the 16th century, European globe-makers started offering pairs of globes, representing the Earth and the skies. Due to the manufacturing of pairs of globes and their wider distribution, their characteristic structure remained unmodified to the middle of the 19th century.

The main elements of a globe are:

Condition of the globes

The two globes, the Celestial (1770) and the Terrestrial (1835) from the Franciscan Monastery of Friars Minor in Dubrovnik were produced on the basis of maps by Didier Robert de Vaugondy, celebrated French cartographer and geographer to Louis XV, whose major contributions to French and global cartography were Atlas Universel of 1750–57, Nouvel Atlas Portatif of 1784, and a very popular map of North America published in 1761. The Dubrovnik celestial and terrestrial globes have the same structure, consisting of the following elements:

In contrast to the celestial globe, the terrestrial globe also has two polar "caps" made of paper, and a small cardboard ring on top of the meridian, with twelve Roman numerals indicating the months.

X-ray images were made to investigate the internal structure of the globes. The images showed that the globes were empty, consisting of two papier-mâché hemispheres, covered with a layer of gypsum. A wooden rod, with a diameter slightly wider at both ends, passes through the centre of the orb. At its ends, the globe’s sphere is attached by small metal nails.

The wood of the globes' bases was degraded by active woodworm. Significant surface damage could be observed: holes, channels, scratches; longitudinal cracks in the painted coat and wood; attached and unattached impurities over the entire surface of the globes' spheres, bands and arches; darkened and cracked varnish. A number of mechanically damaged places on the surfaces were also visible, as well as those caused by insects. There were numerous cracks in the gypsum and in the paper, and the largest cracks could be observed on the poles of both globes, and along the equator of the terrestrial globe. Wear to the paper and gypsum layer, caused by the lower part of the globes' spheres rubbing against the meridian band, had completely destroyed a segment of the depiction on the spheres.

The meridian band and four arches on the celestial globe were slightly deformed, while, on the terrestrial globe, the arches displayed more visible deformations, and they were poorly fixed in the groves of the wooden mount and the meridian band. The metal axes and nails were corroded.

Paper analysis showed that lignin was present neither in the paper gores and bands, nor in the cardboard that the arches and bands were made of. Lignin is a chemical substance, originating from wood, whose presence makes paper and cardboard become yellow and brittle with time. The varnish found on the globes was of plant origin, soluble in water: gum arabic. It was established that the print dye was water-resistant, but the red colour on the edges of the bands dissolved in water, so it had to be cleaned very carefully.

Following the preparations described, wooden, metal and cardboard elements were detached from the globes' spheres, and each of them was conserved separately.

Work on the spheres and paper gores

Firstly, the entire surface of the sphere was cleaned using a soft rubber and brush, and the resistant impurities were removed with scalpels. The thickest layers of varnish were carefully removed from the globe’s surface with cotton pads, lightly dipped in a 1:1 mixture of alcohol and water. Thinner coats of varnish were treated with a gel composed of methyl cellulose, water and alcohol, which allows precise removal of varnish and stains, without excessive wetting of the paper. The globes' spheres were worn in the sections surrounding the metal axes; both paper and gypsum were missing. The holes in the wooden rod, which the metal axes were attached to, had widened. They were therefore filled with a mixture of sawdust and ethyl-vinyl-acetate (EVA) reversible adhesive, covered with a layer of Bologna chalk in animal glue. This layer was treated using a scalpel and fine sandpaper, and then coated with a 2% animal glue, to reduce its porosity. The filling was made of laid paper whose thickness, colour and structure were similar to the original paper on the globes, and it was attached to the gypsum using a mixture of Tylose (methyl-hydroxyethyl cellulose) and EVA adhesive. The large areas with surface damage to the gypsum on the southern side of the sphere were treated in the same way. A specimen of paper gores taken from one of the numerous Internet pages on the globes was used as a model for producing a paper gore that would correspond to the original paper gores on the celestial globe. The specimen was processed on the computer, transferred to the laid paper and cut out using scissors. A part of the gore was attached to the gypsum, as a continuation of the existing, original gore.

On the northern pole of the terrestrial globe, the damage was more pronounced. A cross-shaped crack in the gypsum was reflected in the paper, which had to be separated from the gypsum. In contrast to the celestial globe, the terrestrial globe is made of circular paper cuts. A circular paper cut was fixed on the face with thin Japanese paper and a 2% Tylose, using the so-called facing method; and then the paper cut was separated, while still wet. The cracks in the gypsum were mechanically cleaned, filled and treated in the same fashion as those in the celestial globe. The polar section was fixed using Japanese paper and a 5% Tylose applied to its back. Slightly moistened, it was returned to its place on the gypsum and glued with a mixture of Tylose and EVA adhesive. Finally, the facing was carefully removed from the moist section.

A large horizontal crack in the equatorial section of the terrestrial globe's sphere was mechanically cleaned and filled with gypsum, which was then treated. Larger sections of missing paper were filled with laid paper, and small tears with paper pulp in a 5% Tylose. The retouching was done with watercolours and black ink.

Work on the bands and arches

The meridian and horizon bands, the smaller ring on the meridian and the four arches are made of multi-layered cardboard, coated with a thin layer of gypsum, with paper attached to it, displaying various depictions made with copper-plate printing technique.

A fluoroglicinol analysis established that the cardboard contained no lignin. But the layers of cardboard had separated in several places, and they had to be glued together with EVA adhesive. The varnish was removed from the paper elements with cotton pads dipped in a mixture of alcohol and water. Then the paper layer was separated from the cardboard, using gel consisting of 2% methyl cellulose and an addition of alcohol. The impurities were extracted from the back of the paper using blotting paper immersed in a mixture of water and alcohol.

Once cleaned, the paper was neutralized with calcium hydroxide. Tears on the paper bands were carefully mended and fixed on the back with thin Japanese paper; the missing elements were reconstructed using suitable laid paper, they were then moistened and put under a press, covered on both sides with a woollen felt and polyester cloth Reemay. The distorted arches were moistened in a 'sandwich' made of the polyester non-porous foil Melinex and the semi-permeable capillary membrane Sympatex, and afterwards they were slowly pressed for a long time, until they were completely dry and straight. The moderately moist restored paper bands were repositioned on the cardboard horizon and meridian bands. The paper was not separated from the arches because it was stable and displayed no great damage, and it was cleaned in the same manner as the paper gores on the globes' spheres. The arches were neutralized with calcium hydroxide, which was sprayed over their surfaces using a fine spray.

On the lower segment of the equatorial band of the terrestrial globe, there was circular damage of 5 cm in diameter, caused by candle flame. The burnt paper was slowly scraped off using a scalpel. A circular filler was prepared from suitable paper, and it was glued into the corresponding place.

The small ring on top of the meridian band was broken at the spot where four small brass nails had fixed it to the meridian band. The separation of the layers of cardboard was significant, and the paper was missing from several areas. Once the varnish was cleaned, the paper was separated from the cardboard. The cardboard was divided into two parts along its entire length, using a bamboo spatula. The cardboard layers were strengthened with Japanese paper (tengujo), and then glued back together using EVA adhesive and pressed. Fillings were made in both the gypsum and the paper, which was then repositioned on the cardboard band.

The red edges of the bands and arches displayed a lot of damage to the colour and paper base. Fillers were made and coated with 2% methyl cellulose, and then retouched with cadmium red watercolour.

All elements of the globes, save for the wooden mounts, were varnished with two coats of a solution of Paraloid B-72 in toluol. The first was applied from a greater distance, lightly over the paper surface, and quickly dried, whereas the second coat, providing the globes with a silky finish, was applied from a distance of some 40-50 cm. When the varnish was dry, the various elements were put together and glued with EVA adhesive, and the metal axes were carefully hammered into the wooden rod, through the meridian band and the globe’s sphere. Finally, the small ring was fixed to the meridian band with four small nails.

The conserved globes were returned to their owners in 2003, on the eve of the opening of the renovated library of the Monastery of Friars Minor.