After a bronze cannon was found in 2012 in the northern bay of Molunat in Konavle and reported by Zoran Delibašić from the Zagreb divers club ZG-SUB, the Croatian Conservation Institute was appointed to investigate and retrieve the cannon from the sea. 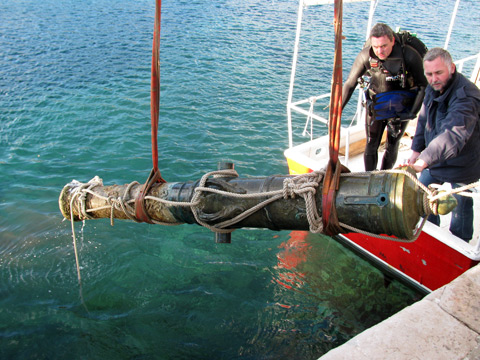 During November and December this year Igor Miholjek, head of the Institute’s Department for Underwater Archaeology and Igor Mihajlović, conservator archaeologist raised a 320-cm-long cannon from the muddy seabed at the depth of 22 metres and some 150 metres off the shore. Lifting airbags were used to transport it and a crane to hoist it to the shore. Logistic support was provided by the Alfa-Patriot veterans’ association from Molunat and the Eco-Mar enterprise from Mokošica.

An inscription indicating the caster and the year of casting is well preserved on the rear portion of the cannon – it was cast in 1758 by a well-known caster Giovanni Battista Cebrana II from Turin. It is a 12-centimetre-caliber cannon, assumed to have weighted around 1600-1800 kilograms.

Although it is for the time being unclear as to what historical circumstances tie the cannon to this site, it is possible to assume that it belonged to a French vessel and that it ended up in the sea in 1806, when the French and the Russian fleet battled in the area.

Financial backing for the investigation and the retrieval of the cannon, as well as its conservation in the Preparation Workshop for Metal of the Dubrovnik Museums was provided by the Association of Friends of Dubrovnik Antiquities.