Conservation of the Copper Cauldron

On the site of the post-mediaeval shipwreck in the shallows of Sv. Pavao (St. Paul) near the island of Mljet, among elements of the ship's structure, archaeologists discovered a copper cauldron. The protective cleaning of sea vegetation and sand from the cauldron, followed by desalination and removal of products of calcification and corrosion, were done in the Croatian Conservation Institute. The cauldron's missing elements were reconstructed, and the copper item was patinated to obtain an appearance that would be as natural as possible.

The archaeological excavation of the post-mediaeval shipwreck on the off-shore site of Sv. Pavao, near the island of Mljet, began in 2007. Several elements of the ship's structure have been discovered, together with eight bronze cannons and a number of other archaeological finds, including a copper cauldron. The cauldron, of 43×27 cm, is made of two copper plates, riveted together. On each of the diametrically opposed sides of the cauldron rim there are four rivets, which used to hold plates for attaching the missing handles. When discovered, the cauldron was covered both on the outside and on the inside with calcareous and corrosive deposits. In the section between the cauldron bottom and the belly, a metal surface of 20x5 cm had completely disintegrated, and it was missing. 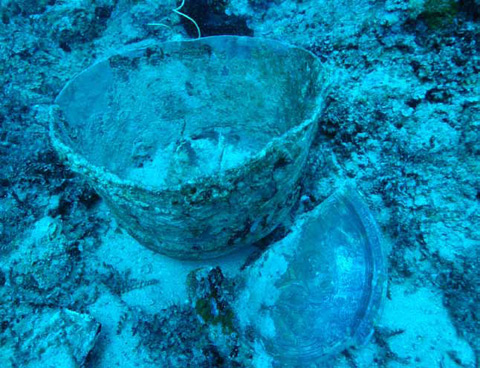 After it was brought to the surface, the cauldron was transported to the conservation workshop, where its condition was recorded and documented. It was cleaned of algae, weed and sand, and then desalinated. The desalination process was performed in a pool of tap water, with monthly monitoring of salinity measured by instruments. The desalination took twelve months. Once completed, the item was taken out of the water and dried. The calcifications and calcareous deposits were mechanically removed from the surface of the metal, using various hand tools. When the large calcite deposits were removed, corrosion products were observed on the metal surface, both on the inside and on the outside of the cauldron. Mechanical cleaning tests showed that the corrosive layers on the surface of the item were very thin, and, on their removal, the original metal appeared. The products of corrosion were removed by micro-sanding.

A sample of metal and a sample of black deposit from the cauldron bottom were subjected to laboratory testing. The metal sample was analysed with the X-ray fluorescence method (XRF). The result of the analysis showed a 99% presence of copper in the sample. The black deposit was analysed with FT-IR spectroscopy, which revealed the presence of elements originating from organic compounds and earth substances, silicates and clay.

The missing segment was reconstructed in the following way: the gap was filled with epoxy resin with added pigment, and then the filling was shaped using a micro-engine. In order to protect the cauldron from environmental impacts, it was coated with a protective consolidating substance consisting of a mixture of thermo-plastic acrylic resin and micro-crystalline wax in a solvent.

With the aim of patinating the sections of the cauldron where the original metal showed after the cleaning, and thus obtaining a natural appearance, patination tests were carried out using various chemical agents. The most natural appearance was obtained by patinating the original metal using a liver-of-sulphur solution. White traces of oxides, which appeared as a result of the patination, were removed by polishing, using steel brushes on a micro-engine. The conservation interventions resulted in the cauldron being cleaned of calcareous and corrosion deposits, stabilized and restored. After conservation, no detrimental changes are visible on the item, which means that its further deterioration has been prevented, and it will be preserved for a long time.