Conservation of an Amphora of the Spatheion Type

Several fragments of ancient amphorae of the Spatheion type have been found in the waters off the island of Lastovo, at a site close to the island of Prežba. This type of amphora, made of robust, bright red pottery, with spindle-shaped body and small handles, was produced between the 4th and 7th centuries in the territory of today's Tunisia. Due to the fact that these amphorae are very rare in our region, the discovered shards were used in the reconstruction of a single amphora.

The fragments of amphorae discovered in 2007 during the exploration of the underwater archaeological site near the island of Prežba in the vicinity of Lastovo – headed by the divers of the Department for Underwater Archaeology of the Croatian Conservation Institute – were delivered to the workshop of the Department for Conservation of Underwater Archaeological Finds in Zadar, as soon as they were taken out of the sea. The fragments consisted of two necks with handles, two belly shards and two bottoms of amphorae of the Spatheion type. 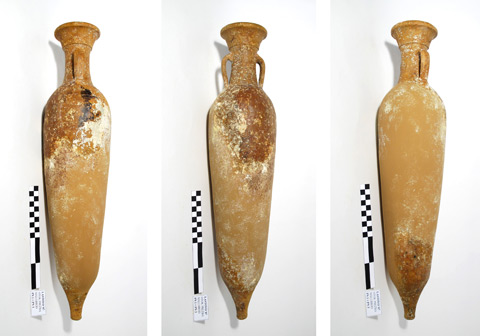 Amphorae of the Spatheion type are described in literature as amphorae of spindle-shaped bodies and small handles, produced in various dimensions. They were made of robust pottery, their colour was bright red or brownish, and they were often coated on the outside with a thin layer of a lighter engobe. This type of amphora was produced between the 4th and 7th centuries in the territory of today's Tunisia, and they were present throughout the eastern, central and northern Mediterranean. They were used for transporting oil, olives, fish sauces and wine.

Organic deposits and calcareous and silicate skeletal remains of marine organisms covered the entire inside and outside surfaces of the amphora shards. The pottery material was compact to the touch, indicating that it had been fired at high temperature. The discovered fragments could not be joined together. An agreement was reached with the underwater archaeologists that, due to the fact that amphorae of this type are very rare in this region, a single amphora would be reconstructed.

Once the amphora fragments were received in the workshop, they were placed in large tubs of tap water, and the desalination procedure started. The desalination lasted for eight months. During that period, the water was regularly changed, and, prior to and following each change, the electrical conductivity of the water was measured using a conductometer, to establish the quantity of released salts. After the quantity of salts had reached minimum constant values, the items were taken from the water and left to dry in the shade.

The dry shards were preliminarily cleaned with soft brushes under running water. After that, scalpels were used to remove soft, incohesive organic deposits. More compact and firmly attached calcareous deposits were removed mechanically, using an electric vibrating chisel, while the remaining deposits were thinned down with a combination of mechanical and chemical cleaning methods. The deposits were softened with compresses soaked in a 10% solution of EDTA in distilled water, applied only to places covered with deposits, and then removed mechanically by chisels. The shards were then rinsed copiously with water, until a neutral pH value was reached. In the case of some low and very tightly attached calcareous and silicate deposits, further cleaning was not insisted on because the deposits did not impact the reading of the artefact. For the same reason, further conservation was also abandoned. Thereafter, the fragments were consolidated with a 3% solution of polyvinyl consolidant in acetone, applied by brush.

Prior to conservation, a life-size drawing was made of every amphora fragment. By linking and overlaying several drawings of fragments of rims, necks, bodies and bottoms, a graphic reconstruction was obtained of an entire amphora, which was around 61 cm high and no more than 14 cm wide. Elements used for the reconstruction were those of corresponding pottery texture and colour. The amphora reconstruction was done in several phases. In the first phase, the upper part of the amphora was integrated. The missing section was shaped out of alabaster gypsum, applied to a mould made using an imprint of the original part. A section of the bottom was integrated in the same manner. Then a long cylindrical body was made on a pottery wheel, to link the upper part of the amphora with the bottom. Once the gypsum was dry, the upper part was attached to the body, and then the bottom was also glued to it. The adhesive used was water-based, and joints were additionally fixed with alabaster gypsum. The gypsum surface was finely treated from the outside with files and sandpapers of various granulations, and then toned using acrylic colours. A neutral brown colour in a tone similar to the original was applied as the base, and then coats of a lighter colour were added to it using sponges. Irrespective of the effort to imitate the appearance of the original surface, the elements made of gypsum were reproduced in a tone which was slightly lighter.