The first official textile repository in Croatia has been set up in the Ludbreg Conservation Centre. This is a collection of vulnerable or valuable textile artefacts, which are kept under suitable conditions with a view to preventing their deterioration. The Centre collects items which should become the core of a future textiles museum, subjects them to emergency conservation procedure and prepares basic documentation concerning such procedures.

The scientific conference "The Most Important Procedures in Preservation and Condition Enhancement of Historical Textiles", organized by the Croatian Conservation Institute and held in Zagreb on 24-26 November 2008, discussed the ongoing problem of vulnerability of historical textiles kept in the field, especially in parish churches and monasteries, where precious textile items are stored under unfavourable conditions and prone to deterioration. On a proposal by conservators of the Ministry of Culture, the decision was made to set up a textile repository, aimed at preventive protection and preservation of vulnerable historical textiles, which should serve as the core of a future textiles museum. 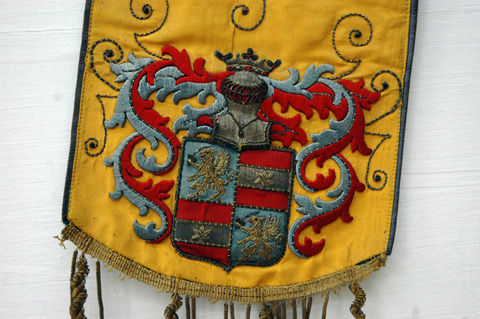 In 2009, the necessary space, meeting all the conditions for proper storage of vulnerable textiles, was provided within the Ludbreg Conservation Centre of the Croatian Conservation Institute. The rooms are equipped with a device for maintaining optimal microclimatic conditions, and stored textiles are cared for by specialized conservator-restorers. It is important to underline that the ownership of the stored artefacts does not change – they are only stored and kept in the fabric depot, to ensure their preservation.

The initial funding necessary for acquisition of the basic equipment, restoration material and tools was provided by the Ministry of Culture. The Croatian bishoprics and monastic provinces were informed about the repository, and so were the relevant conservation departments. Once the main conditions were satisfied, in 2010 the collecting of artefacts from the field began. This work is done by conservators of the Ministry of Culture, in cooperation with conservator-restorers of the Croatian Conservation Institute, from the Zagreb Department for Textiles and Ludbreg Conservation Centre.

Following field research aimed at collecting information about the condition of the textile inventory, precious and vulnerable items were selected and brought to the repository from several sites (Klenovnik, Koprivnički Ivanec, Ivanec, Ludbreg, Skradin), mainly parish churches and monasteries. When discovered, the items were being kept under very poor and unfavourable conditions, stored within wardrobes and wooden chests of drawers in the sacristies, exposed to excessive air humidity, dust, insects and rodents

In the Centre, the collected artefacts were subjected to emergency conservation, which includes disinfestation in an inert nitrogen chamber over a period of between eight and ten weeks, removal of surface dirt and dust, preventive protection of the most vulnerable and badly damaged elements by laying them under or placing them between two layers of tulle, and finally suitable packing and storing of items wrapped in acid-free paper inside metal drawer units or wooden wardrobes. Basic conservation documentation was also compiled, including photographs, drawings and texts on the original condition of the artefacts, which includes the main information on the artefact, its owner and origin.

To date, the textile repository has collected over one hundred textile items, mostly pieces of church inventory. These are chasubles, copes, dalmatics, stoles, chalice veils, manipules, burses and palls, flags and flag ribbons, and various other textile fragments and pieces of folk costumes or civic attire dating from the period between the early 18th and early 20th centuries.

Among these, there are elements of church vestments made of very old, precious and rare historical fabrics, such as plush, atlas, damask and lampas, interwoven with silk threads of various colours, gold- and silver-coated threads. Some other fabrics, nowadays rare, are also present, and their particular appearance is a result of variations or combinations of basic weaves (linen, atlas, twill) or some special technological processing (pressing). Some items have been additionally adorned with diverse braiding made of silk and metal threads and lamellas, lacework made of gold- and silver-coated threads and lamellas, fringes and bullion made of silk or metal threads and spangles. Some artefacts are adorned not with rich fabrics, but rather with embroidery techniques such as "needle painting", "petit point" and "cross stitches" executed in silk thread of various colours or in relief embroidery made of gold- or silver-coated threads, applications made from silk or woollen fragments, and even the more recent technique of machine-decoration by tambouring technique.

The analysis of the items, the final phase of their treatment during thedevelopment of the documentation, includes identifying the technology of production of the fabric and the item itself, and an analysis of decorative patterns and cuts, which contributes significantly to the dating of the artefacts.