As part of the full scale rehabilitation of Veliki Tabor, in 2008 the traces of painted decorations were discovered. Dating from the first half of the 19th century, the decorative paintings with vegetable and tendril motifs found on two walls of a room in the northern wing of the castle, had been coated in layers of white lime. The works to remove subsequent plasters and lime coatings, protect and reconstruct the original murals, were launched in 2009 and are still underway.

In course of the 2008 conservation research of Veliki Tabor, probing revealed the existence of painted wall decorations on the southern and eastern wall of the Room 2 in the first floor of the northern wing. Underneath the white lime coatings, decorative murals from the first half of the 19th century were discovered, stretching along two walls of the room. They were arranged as a sequence of red, grey and ochre vertical planes with hand-painted vegetable and tendril motifs. The murals ended in a decorative border 2.25 m above the floor. The upper zones and the ceiling had originally been painted and later several times overpainted in a uniform grayish paint. 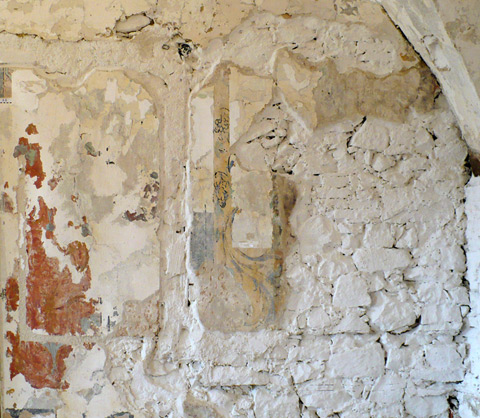 First two phases of conservation and restoration of the painting were underway from the beginning of 2009 to March 2010. During this period the plaster layers were preventively bordered, injected, the subsequently applied materials (plaster and lime coatings) were removed and the missing original plaster layers were recovered. Detailed photo and graphic documentation was made of the pre-existing condition including all phases of conservation and restoration works. The missing paint layer on the eastern wall was largely recovered, while the work on the southern wall has just begun.

The discovered murals were painted in a secco technique, so the subsequent plaster layers had to be removed slowly, using scalpels. The research revealed two layers of plaster underneath the mural. The older layer was applied directly to the stone structure of the walls. It was yellowish in colour and adhered poorly to the background. On the other hand, the plaster onto which the other paint layer was applied was of a warmer grey colour, it was fine-grained and unevenly applied, varying in thickness from a few millimetres to one centimetre.

The pre-existing condition was graphically documented in situ after a net was installed on the wall painting. Entire painted surfaces as well as individual fragments were entered onto a 1:10 ratio millimetre paper. The drawings were later worked up and put together using a computer programme.

Removing the lime coatings was an extremely demanding task, as they had been firmly bound to the original layer. Several softening trials were performed: using distilled water (cotton wool soaked in distilled water was left on top the coating for 24 hours), using a mixture of AB 57, lemon and vinegar acid (a 2.5% and 10% lemon acid in water solution and a 5% vinegar acid). None of the trials had any effect, so cleaning continued to be performed carefully, only manually i.e. using scalpels.

Prior to the reintegration of the paint layer, the accumulated dirt and impurities were cleaned off with rubber erasers and Wislab sponges. The sponges were used to clean larger surfaces, while the fine cleaning was done with erasers. The red surfaces were cleaned more carefully as the pigment pulverized at places. It these areas the pigment was twice consolidated with Paraloid B-72 (a 2-3% solution of Paraloid B-72 in acetone was used). It was then applied to the wall using a wide brush over Japanese paper.

The cement and lime patches which had in previous wall reparations been applied in a layer above the level of the original plaster have now been removed. After that, the fallen plaster was replaced with coarser lime sand plaster. But prior to that, the wall had been coated in a mixture of lime and sand in order for the new plaster coat to better adhere to the stone wall. The new coarse plaster coat was applied below the level of the original intonaco (the finishing fine-grained plaster to which paint is applied) and also in multiple layers, depending on the size and the depth of the holes and cracks in the wall. Larger holes were filled with stone and brick. An intonaco layer was later applied in level with the paint. A prepared CTS PLM-I powder was used, mixed with distilled water. Before applying the intonaco, a PVC net was put on the wall to serve as armature for binding the new to the old “patches” of plaster. This finishing coat of plaster served as a ground for reconstructing and reintegrating the paint layer.

The paint layer was reintegrated using the trateggio method. The method is used to replace the missing parts of paintings by applying multiple short vertical lines in various colours. It is a usual practice for these lines to follow the form of the painting or the brushstrokes, but in this case the lines were painted vertically, as there were a large number of restorers who were doing the retouch. Aside from being easier to execute, painting vertical lines is quicker than trateggio, which follows the shape of the painted motif. The method was used on all surfaces of the original painting. Backgrounds, tendrils and borders separating the vertical planes were treated in the same way. A 3-5% solution of gum arabic in distilled water was used as pigment binder. A small amount of Cetavlon was added to the solution as preservative.

The process of reconstructing the painted decoration on both walls of the room has begun and is yet to be finished. Larger missing parts were reconstructed in a flat manner, using a wide brush. Kremer pigments were used, with lime milk as binder. A large amount of lime milk was prepared and used also as a mixing medium for the pigments. Three paints were mixed: red, ochre and gray, tinted much lighter than the original colours of the surfaces. The paint was applied to the reconstructed parts of the mural in short vertical brushstrokes in the first coat and by spraying in the second coat. This was done the next day and using a slightly darker shade than for the previous coat. The spraying produced a vibrant surface, like that of the original mural after it had been retouched.