Wall Paintings on the Vaulting of St. Florian's Church in Varaždin

The vaulting of the Baroque Church of St. Florian in Varaždin is decorated with six medallions painted in the fresco secco technique. Before the systematic conservation and restoration works were launched in 2008, the vaulting had been covered in a paint layer of decorative motifs, probably dating from the 19th century, and in two older lime coatings. After the overpaint had been removed, painted scenes with Baroque style characteristics were uncovered. Based on the way the drawing was built and the morphology of the figures, the paintings were attributed to Blaž Gruber.

Six medallions inside the 18th- century moulded stucco frames are painted on the vaulting over the nave of the Varaždin Church of St. Florian. Three by three medallions are symmetrically arranged within two bays of the nave. The two central medallions are larger sized and more elaborate in form than the surrounding elliptical four. Each medallion depicts a scene painted in the fresco secco technique. The central medallions depict the scenes of Holy Trinity and St. Florian putting out a fire, while the ovals represent St. Lucy, St. Apollonia, St. Catherine of Alexandria and St. Barbara. All the depicted saints were 3rd-century martyrs. The medallions are surrounded by painted stucco decoration. 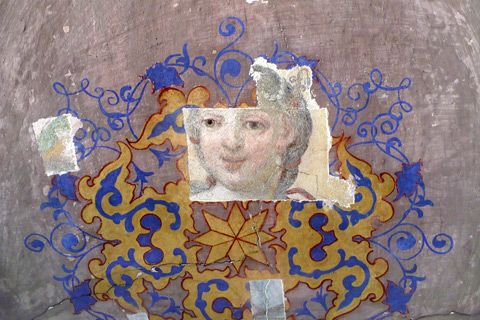 The entire vaulting over the nave, including the scenes in the medallions, was overpainted in a decorative mural, probably in the 19th century. Systematic conservation and restoration work on the paintings in the medallions began in 2008 by removing subsequent coatings over the original Gruber’s paintings – the overpaint and two older lime coatings. Since the oldest lime coating was very firmly bound to the original paint, this phase of work took four years to complete. To avoid causing any damage, the cleaning was done very carefully, using medical scalpels.

Based on the way the drawing was built, the depiction of the figures and the comparative material, it was confirmed that the painted scenes are a work of either the Varaždin Baroque painter Blaž Gruber or his artistic circle. A Latin inscription with the year 1738 which is preserved on the triumphal arch matches the Baroque paintings chronologically and stratigraphically, adding to the assumption that they were created the same year.

After the long restoration phase in which subsequent painted layers were removed, the damaged surfaces and cracks were filled with lime-sand putty. To match the tone of the original as closely as possible, the mixture was toned with powder pigments. The paint layer was reintegrated, to larger or smaller extent, in all parts of the medallion where it had peeled or fell off. A series of 1-2 mm diameter dots was painted, a technique used to replace parts of the missing painting. In this phase of work, a mild solution of gum arabic was used as binder.

Along the central portion of the medallion with the depiction of St. Florian, the paint layer together with the plaster layers had entirely fallen off. The damage was discovered only after the subsequent overpaints have been removed. The existing patch was in very poor condition, it had cracked and partially detached from the edges of the damaged wall painting. The old patch had been applied in a very thick layer, several centimetres above the level of the original painting. It was removed and replaced by a new one. The new plaster, composed of one-fifth lime and four-fifths sand, was applied in two layers: larger-grained sand in the bottom level and smaller on top. The surface of the plaster remained lower in level than the painting.

Part of the missing scene – the almost complete figure of St. Florian was reconstructed based on other works of Blaž Gruber and other depictions of the saint by other authors. For the reconstruction of the saint’s posture, with certain adjustments, a frontal depiction of the Baroque sculpture of St. Florian was used, which is found in a niche on the façade of the church. Florian’s face was built after Gruber’s way of painting, which is characterized by oval, plump faces with gentle features and large eyes. The reconstruction of Florian’s face was partly modeled after the way Blaž Gruber painted the face of Margaret of Cortona in his painting from the St. John the Baptist Monastery in Varaždin, around 1730.

Prior to the reconstruction, a basic drawing executed in powder pigments mixed with lime milk was put onto the plaster foundation. The reconstruction was done in dry pastel technique. This technique’s visual impression closely resembles the fresco secco technique, which was used for the original painting, and the pastel coating is reversible i.e. it can easily be removed.