The Wall Painting of St. Jerome's Triumphal Chariot in Lepoglava

In the course of the 2006 construction works in a first-floor room of the northern wing of the Pauline monastery in Lepoglava, while removing a partition wall, a fragment of a wall painting was discovered. Executed in lime painting technique, it measures 380×35/40 cm. The fragment is only preserved in the length and width of the partition wall, but was once part of a larger painted medallion on the room's vaulting, as indicated by the remains of stucco mouldings on its edges. Multiple lime-wash coatings were found on top of the paint layer, which points to fact that it had been hidden even before the partition wall was erected.

An examination found the plaster layers to be in very poor condition. The first plaster coat (arricio) had detached from the brick vaulting, in areas as much as 2 cm. The fragment was therefore separated from thevaulting using the staccio method, with final layer of plaster (intonaco), it had undergone treatment in the workshop and was returned to its original position on the vaulting. 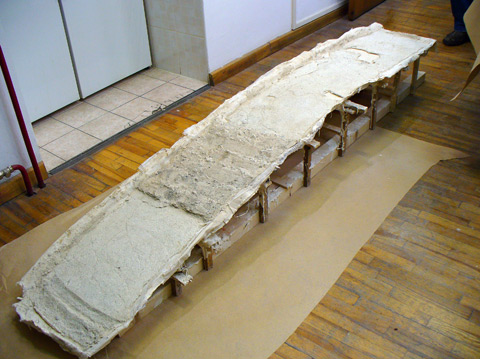 As a preparation for separating the fragment, a 1:1 ratio drawing along with photos of the pre-existing condition was made. As the margins and areas around larger lacunae threatened to come off, they were preventively bordered with lime-sand plaster. In order not to damage the fragment while it was being removed from the vaulting, it was consolidated by applying a 5% water solution of Klucel G to glue the Japanese paper. A layer of gauze was then glued to the Japanese paper using Primal AC 33, and then a linen cloth using the PVAC glue. The cloth was cut and applied in two layers, the second layer covering the joints of the previous layer. In order for the plaster to preserve the original curve while being removed from the vaulting, a 1-2 cm thick layer of gypsum was applied to the cloth. In the meantime, a wooden structure was made which also followed the curve of the vaulting. At certain points it was attached to the gypsum layer with hemp and gypsum. Due to its large dimensions, the preserved fragment was divided into two larger and several smaller pieces.

In order for the fragment to be turned back to front side during restoration treatments in the workshop - depending on what was needed – two wooden supports were made to adjust to the curved form of the fragment. One was made to fit the form of the paint layer, the other was made to fit for the backside. The supports consisted of two horizontal wooden bars with smaller batten carriers placed at every 25 cm, their height depending on the exact part of the fragment’s curve for which they were made to fit. Styrofoam sheets were placed on the battens, thin enough to bend following the shape of the arch without snapping. The support on which the paint layer was placed was additionally consolidated with a layer of gypsum and a thin layer of silicone to level the imperfections of the final plaster coat and the paint layer. As it was being turned over, the fragment was placed between the two supports which were bound by a wide adhesive tape. The backside of the fragment was thinned to the level of the finishing plaster. All the removed parts of the fragment were rejoined and consolidated with an armature mesh and lime-casein plaster.

After the lime-wash coats were removed from the paint layer it was revealed that the central scene depicted St. Jerome in a triumphal chariot. The chariot is drawn by two harnessed lions, reined by an angel. On the edges of the fragment two medallions are painted carried by angels. The medallions are devoted to two Pauline monasteries: one in Remete in Zagreb and the other in Marianka, now in Slovakia. Characteristics of the painter’s style confirm the fragment to be a work of Ivan Krstitelj Ranger (John the Baptist Ranger), a Baroque painter from the first part of the 18th century who lived in the Lepoglava monastery for some time. A similar depiction of the triumphal chariot is found in the Church of St. Jerome in Štrigova, which was also painted by Ranger.