The Romanesque Chapel of St. Helen near Oprtalj is one among many Istrian churches with valuable wall paintings dating from the Late Middle Age period. The wall paintings in the apse and on the triumphal arch are a work of master Cleriginus II from Koper, painted in the first half of the 15th century. Conservators found the wall paintings heavily damaged – wide and deep cracks cut through the wall paintings in the apse in several places. Among a large number of lacunae of the damaged plaster layers some even revealed the stone structure. In some areas the wall paintings were subsequently overpainted using a coating which had firmly bound to the background. Complex conservation and restoration procedures ensued, aiming to consolidate the building, remove the subsequent plaster and paint off the inner walls and protect, consolidate and reintegrate the original layers.

Situated near the Istrian town of Oprtalj, the Romanesque chapel of St. Helen is a single-nave building with an inscribed semicircular apse. A small distaff belfry rises above the western front. There is a single window on both sides of the main entrance, the northern and the eastern walls are completely plain, and there is another window opening on the southern wall of the building. 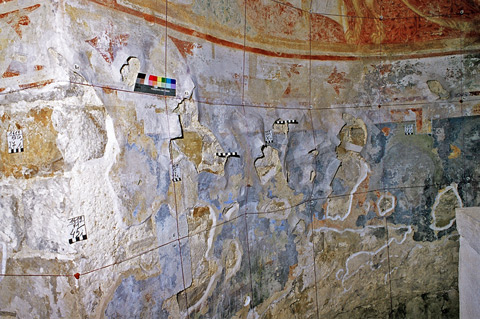 A wall painting depicting the scene of Maiestas Domini is at the centre of the apse, surrounded by symbols of the Four Evangelists. A lion and an eagle symbolizing St. Mark and St. John are depicted on the northern part of the semi-dome, and to the south an angel and an ox, symbols of St. Matthew and St. Luke are painted. The northern part of the apse features a crowned depiction of the church’s titular St. Helen. St. Bishop is depicted on the southern side and the Lamb of Good is on the apex of the semi-dome. The scene of Annunciation is depicted on the triumphal arch, Gabriel is on the left and St. Mary is on the right. The lower zone of the walls is decorated with marbleized rectangular fields. The compositions are separated by vegetable and geometrical borders. Wall paintings in the apse and on the triumphal arch (along with some very small painted fragments on other walls) were painted in the first half of the 15th century by master Cleriginus II from Koper.

The wall paintings had been seriously damaged. Wide and deep cracks filled with dark-gray cement plaster cut through the wall paintings in several areas in the apse, mostly over the central scene of Maiestas Domini. There were a large number of lacunae of damaged plaster coats, varying in size and depth, with some even revealing stone structure. In the lower zone of the northern part of the apse, the intonaco detached from the background, forming several large swellings. The marbleized fields in the apse and on the triumphal arch were overpainted in dark-red and dark-grey during some later intervention. The overpaints had severely hardened, adhering to the background, together with the remains of the first lime coat which was underneath. The original paint layer was erasing when touched, it peeled and powdered off, particularly in the zone of salt efflorescence. In many areas the paint layer had fallen off, and on the triumphal arch it was almost entirely covered in lime coats. The northern, southern and western walls of the chapel were covered in a more recent plaster and lime and paint coatings. The lower zones of all the walls in the building displayed obvious signs of microbiological contamination and efflorescence of salts.

Main causes for the poor state of the building and the wall paintings were the bad condition of the roof and a large mound that stood against the outer walls of the building. Consolidation included the roof repair and the removal of the mound and subsequent plaster layers from the unpainted inner walls. All such layers of plaster and coatings were removed using chisel and hammer, while scalpel was used in the semi-dome of the apse, the triumphal arch, the northern, southern and western wall of the building. A toned lime coat was applied directly to the stone surface of the unpainted walls. Once the plaster had been removed (from all the walls), painted consecration crosses were revealed and entirely presented. The hardened overpaints of the marbleized fields were mostly removed by scalpels, leaving only the parts whose removal might cause damage to the original paint layer.

Fragments of paintings discovered on the northern and western walls and edges of the lacunae were outlined in lime plaster. The powdering intonaco plaster was consolidated with a brush-applied solution of Syton W30. PLM-A dispersed in distilled water was used to consolidate the plaster layers which had detached from each other or from the background. In areas the intonaco had detached from the background, creating swellings up to 7 cm away from the wall. These were first treated with a solution of Primal AC33 in distilled water and with several layers of Japanese paper. To prevent further deterioration, the edges of injuries were consolidated with lime plaster. The plaster had lost its cohesive and adhesive properties inside the swellings, so it was soaked in a solution of Syton W30, together with the plaster preserved on the support and the plaster from the backside of the detached intonaco. The support and the backside of the intonaco were undercoated with a PVC net and lime plaster. The intonaco was softened with water and returned onto the new background by applying soft pressure. The pulverized paint layer was consolidated with a solution of Paraloid B72 in toluene which was brush-coated over Japanese paper. Paint peels were consolidated with the same solution of Paraloid B72 and partly with a solution of Mowilith 30 in toluen which was applied to the injuries. The peels were returned onto the background using a Melinex polyester foil and hot trowel. Damage to the paint layers was reintegrated with lime plasters of different-sized granulations of the aggregate in several layers, depending on their depth. The plaster used consisted of quartz sand, stone grind, marble dust and slaked lime.

The newly applied plaster was leveled with the intonaco. Several larger lacunae were reintegrated just by creating plaster patches. For the whiteness of the new plaster not to dominate, they were coated in lime milk toned with the ground from the chapel's surroundings. Paint was used only to restore the bands which frame the borders, so as to return the original frame to the paintings. The trateggio method was used for the reintegration of the paint layer. The polychromy of the surrounding original was observed, but of lesser colour intensity to mark the difference between the original and the newly-applied paint layer. Another reason was the gradual darkening of the retouch. To bind the powdered pigments, a solution of gum arabic in distilled water with an addition of Cetavlon was used.