Wall Paintings in the Sanctuary of St. Matthew's Church in Slum

16th-century wall paintings in the sanctuary of St. Matthew’s Church in Slum depicting Old Testament prophets and church dignitaries, allegories and the Life of Christ were hidden underneath an overpaint. Due to long-lasting humidity exposure and static movements they had been covered in smudges and tiny cracks. It took several years of conservation and restoration treatments to eliminate the influx of humidity into the building. Measures were taken to prevent further degradation of the plaster and paint layers, which were ultimately reintegrated, thus giving legibility to the original composition.

The Church of St. Matthew is a single nave church with a sanctuary ending in three-eighths of an octagon. The stellar vault over the sanctuary was built in 1555. Wall paintings which cover the entire sanctuary date approximately from the same period. A work of an unknown master, they were executed in a combination of a fresco and a secco techniques. The sanctuary vaulting is painted with depictions of Old Testament Prophets, church dignitaries, the win of Good over Evil, the Evangelists, the Passion of Christ, Annunciation, Resurrection and God the Father. Four lunettes underneath the vaulting are painted with the depictions of twelve apostles and the figure of Jesus Christ is on the eastern lunette. The walls beneath the lunettes are stencil decorated. 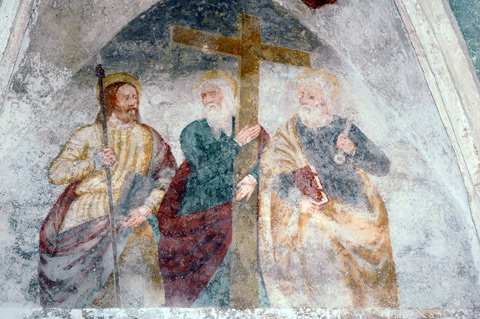 Prior to the onset of conservation works on the wall paintings, the wall of the sanctuary had been covered in layers of whitewash and finished in a blue painted layer with ochre-coloured stars. The overpaint was done as marbleization, covering the original paintings from floor to the frieze level, including a shallow niche above the sacristy door, the triumphal arch and the vault ribs. Remains of the polychrome overpaint were visible on the keystone and the joint stones. Dark smudges resulting from humidity which penetrated through the roofing were found on all the vaulting fields and on top of the lunettes.

Once the subsequent coats and paint layers had been removed, it became apparent that a large portion of original painting suffered from numerous smaller injuries to intonaco, particularly on the walls. Larger damage to the plaster layers of arriccio and intonaco (partly reaching as deep as the stone support) was found above the later added sacristy door, around the windows on the south-eastern wall, the southern wall, the southern lunette and on the vaulting field above it. Smaller cracks cut through the entire painted surface of the vaulting. Larger cracks (probably caused by static movements) were found in only a few places. In some places the cracks and injuries to the plaster layers came to move and flake. This resulted in a detachment of plaster layers from the support, and the layers separated from each other. The paint layer was covered in a dark soot residue and partially in deposits of white film, particularly on the vaulting. Injuries such as the small lacunae of paint layer that came off or was worn out were found on all wall surfaces. Injuries that looked like they resulted from deliberate scraping of the surface were spotted on the sanctuary walls. In the course of conservation and restoration works, salt efflorescence occurred on the vaulting fields and on top of the lunettes.

Consolidation of the roofing

In order to prevent further influx of humidity into the vaulting construction, the apse covering was rearranged in 2000. Due to a use of unsuitable consolidation materials (lime plaster with an addition of cement and brick), salts were introduced into the structure. Further humidity intrusion caused them to migrate to the surface of the wall paintings, causing crystallization. The consolidation of the roofing ended in 2009 when lime-sand plaster was applied along with Mapelplastic – a hydrolyzing two-component elastic coating.

Conservation and restoration of the wall paintings

The detached flakes of the paint layer were consolidated locally using a solution of Paraloid B72 mixed with acetone and applied over Japanese paper. The plaster layers were consolidated by spraying lime water, coating in lime milk and applying lime mortar around the lacunae. Areas where plaster layers had detached were consolidated using PLM-I. The smut was cleaned off of the paint layer with an AB 57 mixture and then additionally cleaned using scalpels, Wishab sponges and soft rubber erasers. Deeper injuries to the plaster layers were filled with plaster composed of slaked lime, several layers of stone grinds and quartz sand from Jerovec, while the finishing layer that was treated at the level with intonaco was done with PLM-I. The same material was used to fill out small lacunae of the damaged intonaco. The extraction of salts (sulfates) was carried out on the vaulting using the ammonium-barium method. However, the obtained results are short of satisfactory as the salts are still present in the structure of the wall painting, be it to a lesser extent.

The reintegration of the paint layer on the lunettes and on the vaulting was carried out using the trateggio method which was adjusted to the surrounding painting, but always of a slightly lesser intensity than the original. Lesser intensity is used in order to better differentiate the reintegrated area from the original paint layer, and also as the retouch is likely to acquire a slightly darker tone over time. Powder pigments were used for this, along with the solution of Tylose MH 300 in distilled water. The stencil painting was reconstructed on the recovered plaster of the southern wall, using stencils and lazure. The lacunae on other walls which had originally been decorated with stencil paintings were now reintegrated in the local tone (yellow ochre) in lazure, using toned lime milk. Larger areas of recovered plaster on the lunettes and on the ceiling were reintegrated the same way.