Wall Paintings in the Sanctuary of St. Jerome's Church in Štrigova

The conservation of illusionistic wall paintings by John the Baptist Ranger in the trefoil sanctuary of the Baroque Pauline Church of St. Jerome in Štrigova has been underway since 2000. After the condition of the walls was documented and preventive protection measures were taken, the walls were drained and the restoration of Ranger's paintings on the vault, the apses and the triumphal arch was launched.

In the course of five years, the works included the cleaning of wall surfaces, removing the early-20th-century overpaints, consolidating the pigment layer along with the swollen and detached parts of intonacco and finally reintegrating the plaster and paint layers. Conservation treatments were accompanied by necessary construction and craft works. The restoration of paintings in the lower zones of sanctuary walls is planned to continue. 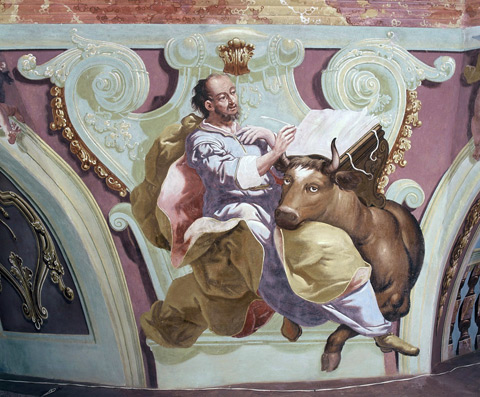 The 1774 illusionistic wall paintings in the trefoil sanctuary of St. Jerome’s Church in Štrigova are entirely the work of John the Baptist Ranger, who used a combined technique of a fresco (figures and scenes) and a secco (large monochrome surfaces).

The conservation work on the wall paintings in the sanctuary of St. Jerome’s Church in Štrigova has begun in 2000 by documenting the condition of lower parts of the walls, the preventive consolidation of detached plaster, the removal of cement plaster off the walls immediately next to the floor and by applying lime-sand temporary mortar. Within the next two years, a Project for the Protection of the Foundations and the Walls from Humidity (2001) was drafted. It served as basis for the drainage carried out around the church (2002). In 2003 a three-storey wooden scaffolding was erected. The works on the wall paintings in the sanctuary began on the vaulting, gradually descending to the semi-domes in the apses and down to the pendentives. They lasted from 2003 to 2008, after which the scaffolding was disassembled and again erected in front of the triumphal arch.

Aside from the usual impurities (dust, cobwebs and insects) and a 1919 overpaint on the vaulting, the lunettes and transverse arches, the largest damage occurred to the paint layer (the flaking and powdering off of the pigment layer). It was caused by roof leakage and by salts, whereby the transverse arches and the lunettes suffered more damage than the vaulting. Minor microbiological damage (molt on the pigment layer) was spotted on the vaulting, caused by the use of organic materials for the painting. The finishing paint layer was executed a secco, with parts of it detaching from the background, peeling or powdering off. In previous treatments many areas of the plaster layer, the intonaco, had been repaired by a plaster with surface coarser than was the original, while the edges of the intonaco around the lacunae had risen and detached from the underlying, coarser layer of plaster. A number of small cracks in the plaster were spoted on the walls of the drum above the triumphal arch. Larger injuries to the plaster layer occurred on the cornice separating the lower section of the sanctuary from the pendentives.

In the course of works on the vaulting and the walls, the positions of the giornate were identified, along with the levels of the original scaffolding (pontata) on the walls. The figures and the scenes were painted a fresco, while larger surfaces (lunettes, transverse arches, pendentives) were painted a secco, this being the primary cause for the original pigment to erase and powder off.

Impurities and overpaints were removed mechanically: using the dry method (soft brushes, wooden sticks and soft rubber erasers) and using cotton wool tampons soaked in a distilled water and ethyl alcohol solution. The flaky and powdery layer of paint was consolidated with slaked lime dissolved in alcohol (isopropanol). The solution was brush coated over Japanese paper to the paint layer. The swollen and separated parts of intonaco on the vaulting, the lunettes and the transverse arches were consolidated by injecting an industrial mixture based on plm-al lime, and the walls were injected with a mixture of plm. The plaster layer was reintegrated using lime-sand plaster. In order to preserve the original powdery structure of the pigment layer, the reintegration of the paint layer was done in dry pastel. Areas from which the pigment layer had fallen off together with the support were reintegrated using matching colours and tones of paint, but without reconstructing the lost details. The same method was used to treat the injuries to the paint layer (the peeled paint layer, the scrapes, nail holes etc.), which were moderated with matching colours and tones of paint but without reconstructing the details.

In the course of works on the vault, rotted filling was removed from the vaulting pockets above the sanctuary. The vaulting was first coated in a thin layer of lime mortar, then the vault pockets were loaded with dry filling. The inner side of the roof was then padded with a waterproof foil to prevent potential roof leakage and soaking of the vaulting and the wall paintings.

The conservation works have so far been accompanied by necessary construction and craft work: from replacing window woodwork in the drum to drainage work in the sanctuary and the removal of subsequent plaster coats from the lower parts of the walls. A follow up to the works on the wall paintings in the lower parts of the sanctuary walls, from the floor up to the cornice is planned – the cleaning, consolidating and reintegrating the paint layer and intonaco – once the wall surfaces had dried off, the rotted cement plaster is removed, re-plastered and the flooring is installed.