Wall Paintings in the Belfry of St. Mary's Church in Zadar

Fragments of wall paintings from the first quarter of the 12th century have been preserved in the belfry of St. Mary’s Church in Zadar. An exceptional monument of Romanesque art, they were discovered during conservation work which ensued after the church had suffered damage in the World War II.

Restoration of the frescos that the Croatian Conservation Institute’s Department for Wall Paintings and Mosaics undertook in 2000 was directed at research and documentation, the treatment of wall paintings and the preserved historical plasters, along with a presentation of the architecture and the wall paintings. To stabilize the microclimatic conditions in the belfry room with the wall paintings, a special chamber was designed, with a device for regulating the temperature and relative humidity. But in order for the room climate to be fully stabilized, a Humidity protection project must also to be realized. 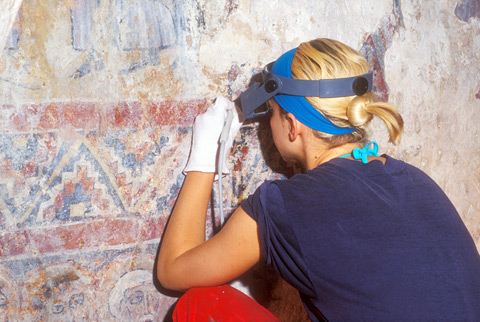 In a first floor room of the belfry of St. Mary’s Church in Zadar, fragments of wall painting by an unknown author from the first quarter of the 12th century have been preserved.

In 2000 the in situ conservation documentation began by photographing the condition and drawing up graphic documentation, later to be used as a basis for recording the treatments performed. Restoration works largely consisted of removing a protective layer of chalk pulp from 1987, the desalinization of the wall paintings, the consolidation of intonaco, the removal of solid lime incrustations, walling up larger crevices and openings, making plaster trials and plastering the lacunae and unplastered portions of wall and vaulting surfaces with coarse and fine plaster.

Most of the chalk pulp was removed mechanically, using the dry method (by brushing, with scalpels and wooden sticks) and the wet method (by rinsing in distilled water with a sponge, and by high-pressure water steam).

The wall paintings in the south-eastern and the north-eastern lunette were desalinized with cellulose pulps soaked in distilled water and applied to wall surfaces over Japanese paper. After initial failed attempts to remove the solid incrustations by chemical procedures, it was ultimately done with ultrasonic devices. For the bottom plaster layer which was used to fill the lacunae within the intonaco and the unplastered wall surfaces, a mixture of crushed stone and river sand with slaked lime was used. The finishing plaster coat was done in slaked lime and a mixture of river and quartz sand with fine particles of crushed stone and red marble grains.

The mentioned conservation and restoration works were completed in 2005, after which a microclimatic chamber was designed and openings on the first floor between the belfry and the chapter hall were closed off. The partition was made from tempered glass, same as the door between the chapter hall and the staircase leading to the first floor of the belfry. To stabilize the microclimate, a microclimatic device was installed on the second floor of the belfry. Whenever necessary it would blow in either dry of humid, colder or warmer air into the first floor room containing the wall paintings. As the plugging of interstices in the stone on north-eastern and south-eastern façades of the first and second floor didn’t prevent the inflow of water into the interior of the belfry, in 2009 a project was drawn up to prevent it from entering through the belfry openings (Humidity protection project). The project has yet to be realized. But apart from preventing water from penetrating through the belfry openings, in order for the room climate to fully stabilize and to prevent direct influx of water and salts onto the wall paintings, it is necessary to plug all interstices and crevices on all belfry façades.

Through years of monitoring the microclimate in the room with the wall paintings in the first floor of the belfry, it has been established that despite the relatively stable microclimatic conditions, there occasionally occurs a crystallization of salt, mostly on the newly applied plaster. To a lesser extent this occurs on the wall paintings, mostly in areas where water has penetrated into the interior of the belfry, through interstices and cracks in the wall. But the efflorescence of salts, which is periodically brush removed, is also a result of the belfry walls gradually drying off, having absorbed the rainfall for centuries. Indicative of this are the salts occurring on the bare surfaces of the vaulting lunettes with no wall paintings. So far, no new injuries to the pigment layer of the wall paintings have been spotted. Periodical microclimate controls and the removal of crystalized salts continue.