The Conservation of Artworks from the Cathedral in Split 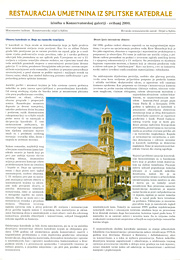 The brochure was issued for the opening of a new Croatian Conservation Institute’s building in Split. This event also featured an exhibition of some of the more prominent artworks restored in the workshop, since its foundation in 1954.

Some of the exhibition's highlights were: Madonna of the Rose Garden by Blaž Jurjev Trogiranin (around 1433) from the Trogir Church Art Collection; St. Francis of Assisi and St. Catherine of Siena by Matteo Ponzoni (around 1635) from Split Cathedral; the Romanesque crucifix from the Convent of St. Claire in Split; the polyptych from St. Cyprian Church in Vis (16th century) by Girolamo da Santa Croce; Sts. Cosmas and Damian by Giovanni Lanfranco (17th century) from the same name church in Lastovo; Madonna with Child and Saints by Giovanni Battista Pittoni (18th century) from St. Cyprian Church in Vis; a Roman floor mosaic from Gradina in Vis; Romanesque wall paintings from the Church of St. Michael in Ston; the stone relief depicting Christ from St. Spirit Church in Split; the wooden archbishop’s throne (17th century) from the Cathedral in Split.