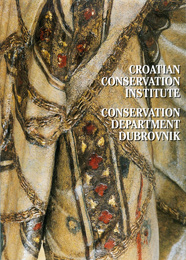 The brochure details the founding and activity of the Dubrovnik Department for Conservation. Since its establishment in 1993, the Department has left a visible trace in saving artistic treasures and cultural heritage from the Dubrovnik region, especially in the years of post-war recovery.

Complex methodology and sophisticated procedures were used on some of the most important works of the Dubrovnik school of painting, namely the Božidarević triptych from the Dominican Monastery, alongside numerous conservation-restoration and protective treatments of other artefacts. The Department also takes part in researches of architectural heritage and conservation of wall paintings.

In addition to this, the brochure covers a minor exhibition which was staged to present the results of the then recent conservation-restoration programmes. Two monumental mid 15th century crucifixes by Juraj Petrović deserve a special mention, among other works that were displayed.