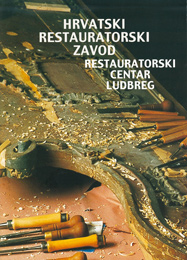 The brochure brings the timeline of establishment and activity of the Ludbreg Restoration Centre. The centre was founded out of the necessity for urgent evacuation of church and museum artefacts from the war stricken regions in Croatia. A »War hospital for artworks«, as it was often referred to in those years, the Ludbreg Conservation Centre was established in 1992 in the Batthyány Castle. The castle was well preserved and could provide spatial facilities needed for the safekeeping and protection of evacuated works of art.