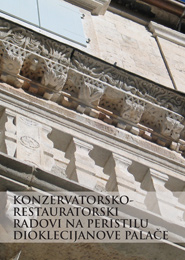 The booklet was featured with the exhibition which presented the second phase of conservation-restoration work on the Diocletian's Palace Peristyle in Split. The conservation-restoration campaign took place in 2006 and 2007. It included the southern part of the western colonnade with the Skočibučić-Lukaris Palace façade (which partly embraces the Roman colonnade) and was later extended to the ground floor of the Grisogono-Cipci Palace façade.