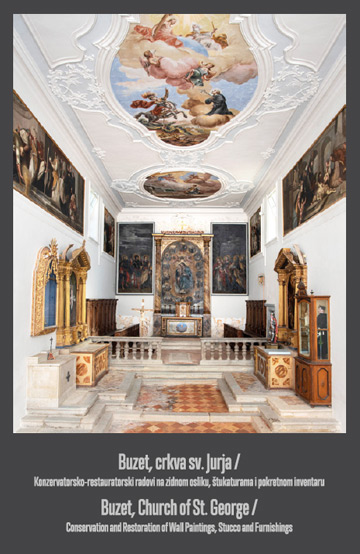 The church gained its present shape between 1603 and 1611 when it was completely refurbished under the patronage of Captain Antonio Erizzo. During the 17th and the 18th century, the interior was equipped with a rich movable inventory.

At the end of the 18th century, the church was once again redecorated, its walls painted by a Venetian master Matteo Furlanetto and stuccoed by Francesco Schiavi from Tolmezzo.

The wall paintings on the ceiling are framed in three luxurious curved frames. The space between the frames is filled with rocaille floral ornaments. During conservation and restoration, multiple overpaints were removed, numerous mechanical damages and cracks were repaired, and missing parts were reconstructed.

The paintings on the ceiling depict three scenes: Holy Trinity with St. George and St. Anthony of Padua in the central cartouche, St. Philip Neri in the north tondo, and Apotheosis and Martyrdom of an Unknown Saint in the south tondo. Angelic musicians are depicted on the west wall. Conservation and restoration of the wall paintings included surface cleaning, filling of lacunae, and retouching. It confirmed that under the visible painted layer in the central cartouche is an older painting with contours of figures carved into the fresh plaster. Research revealed a series of memorial crosses in two layers, inscription and architectural design of a belfry. New findings have been presented on the walls of the southwest corner of the church.

Conservation and restoration included all paintings in the church. A six canvas paintings cycle with depictions of miracles of St. Anthony of Padua is symmetrically mounted on the lateral walls of the church, between the windows. Its commission is also linked to the renovation of the church’s interior in the 18th century and was made by a skilled painter whose style incorporates the Venetian and Central European influences with features of late Baroque Classicism. The paintings were severely damaged, almost illegible due to dirt deposits and opaque lacquer with many mechanical damages and old repairs. Altarpieces Our Lady of the Rosary from the main altar, and St. Eligius with St. Joseph and St. George from the side altar, as well as paintings St. Andrew, St. George and St. Lucy, and St. Barbara, St. Apollonia, St. Simeon and St. Longinus, located left and right from the main altar, were in similar condition. The painting on the main altar is a work by a Venetian painter from the early 17th century, its commission is connected with Captain Francesco Priuli who governed Buzet between 1612 and 1614.

The main altar stylistically matches the painted wall stucco concluding the crown, simulating an attic. Research confirmed that the older retable was reshaped and adjusted to new dimensions of the shrine during the renovation at the end of the 18th century. The altar is a simple, carved and polychromed wooden architectural retable set on a stone altar table. Conservation and restoration were focused on primary protection of the retable’s architecture, consolidation of the wooden support and polychromy, and minimal interventions on the present painting due to numerous overpaints and poor condition of the original.