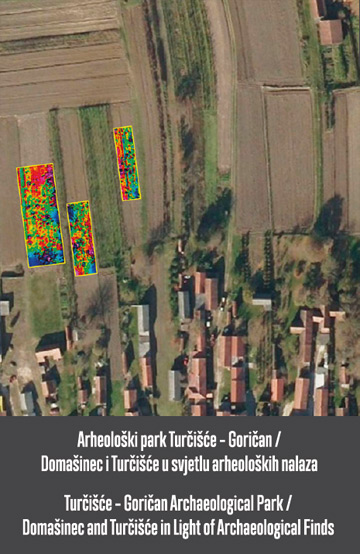 The territory of the Municipalities of Domašinec and Goričan is located in the lowland part of Međimurje. The area has an abundance of archaeological heritage from prehistoric times and the Antique period to the Middle Ages. For the purpose of presenting it to the wider public, the Croatian Conservation Institute launched the Turčišće – Goričan Archaeological Park project in 2013. As part of the project, eight sites were excavated, the most suitable for presentation being the medieval hillfort of Turčišće – Goričan near Domašinec.

The Turčišće – Gradišće hillfort is situated on an elevated plateau surrounded by two ditches and an earth embankment. The results of research suggest that it was a fortified center of the Međimurje gentry, and it was referred to as terra Damasa in the written sources from the 13th century. The name of the noble family was preserved in the name of today's settlement of Domašinec. The analysis of the pottery and samples of coal indicates that habitation began during the 12th century, and the hillfort burnt down in the mid-13th century. Remains of a medieval surface structure, with construction elements that indicate an older type of construction from the beginning of the development of traditional architecture in Međimurje, thatched cottages (šopane hiže), have been found on the central plateau.

The local community was actively involved in the realization of the project by purchasing cadastral parcels on which the site is located, and by financing the conceptual design for the hillfort, as well as the working design. The most important part of the project is to revive a part of history and demonstrate how Croatian nobility lived in High Middle Ages.