Chapel of St. Wolfgang in Vukovoj, Conservation of the Altar of the Blessed Virgin Mary 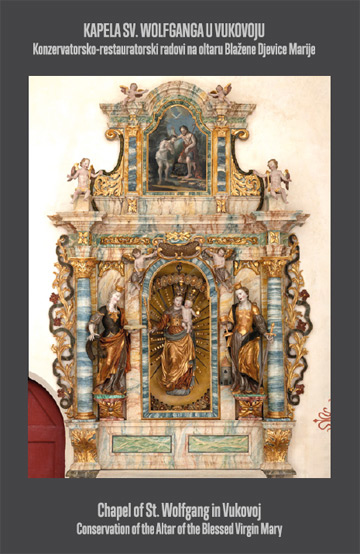 Chapel of St. Wolfgang above Klenovnik is a late-Gothic stone single-nave structure with a polygonal sanctuary, but the bell tower on the façade was added at a later date. The chapel is located on the ridge of a hill, and an old pilgrim’s trail leads to the church with Baroque stone stations along the path. The youngest monument of late Middle Ages in northwest Croatia is unique because of its location, patrocinium, and structural characteristics. Harmony between the chapel architecture and surrounding landscape creates an exceptional ambience.

The chapel in Vukovoj is the only one in Croatia devoted to St. Wolfgang (sv. Vuk), a saint whose iconographic attributes are an axe and a model of a church, as he is portrayed on the high altar. At the same time, the church is located in the southernmost point from where the worship of the saint spread.

There are two wooden gilded polychrome altars, the high altar dedicated to St. Wolfgang (1650) and the altar of the Blessed Virgin Mary next to the northern wall, as well as the pulpit (1749).

According to the inscription on a cartouche from 1674, the altar of the Blessed Virgin Mary was ordered by members of the Brotherhood of St. Wolfgang from the nearby hamlet of Pintarići, from Ivan Jacob Altenbach, a sculptor from Varaždin. Around 1729, the altar was replaced by a new one from the workshop of Ivan Adam Rosemberger, a sculptor from Varaždin. Only the sculpture of the Virgin with Child surrounded by a floral wreath in the center of the altar and the cartouche with the inscription were left of the Altenbach’s altar. The painting depicting the baptism of Jesus is in the attic, and the sculptures of St. Catherine and St. Barbara on the consoles.

The complete restoration of the high altar of St. Wolfgang was carried out at the Croatian Conservation Institute. The high altar was returned in 2011, and conservation and restoration of the altar of the Blessed Virgin Mary were completed in 2017. The work included carpentry repairs, reconstruction of missing elements, removal of old yellow varnishes and overpaints, and the missing polychrome and gilding was reconstructed. Reversible materials and traditional technology were used.