Kaštel Štafilić, Church of the Immaculate Conception of the Blessed Virgin Mary, Conservation of the altar of the Holy Cross 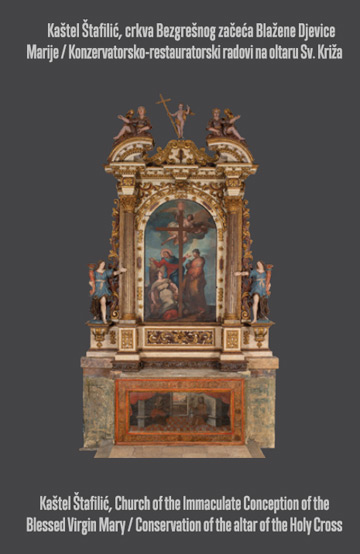 Church of the Immaculate Conception of the Blessed Virgin Mary in Kaštel Štafilić is a perfect example of a structure that combines traditional elements and Baroque stylistic forms. It was built in 1765 by Ignacije Macanović Raguseo from Trogir. The chapel and the sacristy were added ten years later.

A large number of wooden altars were removed from the churches in Dalmatia during the period when marble altars were preferred. This big change was the result of an improved economic situation after the danger of attacks by the Ottoman troops ended in the 18th century. Wooden altars that were not replaced by new ones were mostly painted over several times or preserved only in fragments, with altered dimensions.

Wooden altars from the parish church in Kaštel Štafilić, like the altar of the Holy Cross from the 17th century, present a great challenge for conservation and restoration, but also a pledge to guard the successors of carved, polychromed and gilded altars. The altar is in the cult and worshiped, especially during Lent, along with its altarpiece Feast of the Cross with the three Marys. The painting on canvas, work of an unknown master, is the oldest altarpiece in a parish church, and dates back to the 18th century.

The altar of the Holy Cross is an architectural altar. The complex architectural design and altar concept with five statues, originally with a rich gold and silver decoration on the poliment, speak of its importance in that parish. The accompanying wooden antependium (altar frontal), together with the altar stone, extends into the church nave. Following the work on the disassembled wooden antependium, the presented original painted layer in the central field is a figural painting Betrothal of Mary and Joseph in the Temple, tempera on wood, by Mateo Ottoni (attributed by R. Tomić).

During the work, the wooden, carved, polychromed, gold-plated and silver-plated altar was fumigated, additionally added layers of overpaint were removed, newly carved elements that were missing were added, structural consolidation was carried out, and a partial reconstruction of the original painted layer was performed.

The altar, which attests to the importance of liturgical artefacts passed on from older to newer churches and preserved for future generations, was returned to the Baroque church in Kaštel Štafilić when the conservation and restoration of the altar, antependium and altar stone of the Holy Cross was completed.